Dylan Kladstrup and Joe Vogt both led their respective squads to a sectional title. Dylan Rice, Jude Rouhana, Gunnar Wetzel and Zach Wolfe were their team’s leading goal scorers. Patrick Uebelacker spearheaded Spencerport’s defense and was third on the squad in points.

The seven seniors were named the Players of the Year for their respective divisions as announced by Monroe County coaches.

Rouhana and Vogt shared Division I co-Player of the Year honors. Rouhana finished tied for first on Fairport in goals scored with seven. The senior midfielder netted four of his seven goals in the first four matches of the season. Rouhana added six assists as well. The senior midfielder’s best games of the season were two goals in a 4-1 win at Webster Schroeder on Columbus Day and three assists in a sectional quarterfinals victory over Rush-Henrietta. The Red Raiders advanced to their second straight sectional final.

Vogt was second on Penfield with eight goals as the Patriots went undefeated and won the Class AA title. The senior defender scored in back-to-back matches three times. Vogt collected a pair of assists as well. The senior defender netted two goals twice – both against Webster Schroeder: October 24th in a 7-1 road win and in the sectional quarterfinals.

Nate Battaglia, Cody Cavuoto and Isaiah Johnson made the Division I First Team for Hilton. Cavuoto led the Cadets with seven goals and four assists. Battaglia posted 41 saves and only allowed nine goals in 746 minutes in goal. Johnson scored a goal and was part of a defense which held opponents to 12 over the span of 11 matches.

Brandon Andracki, Josh D’Angelo and Hawk Lindner made the Division I Second Team for Hilton. Andracki and Linder combined for four goals and one assist. D’Angelo contributed to the Cadets’ defense which held teams to one goal or less in eight games.

Angelo Lebron and Tom Stojanov earned Second Team honors for Rush-Henrietta. Lebron had three goals and one assist while Stojanov contributed to a Royal Comets offense which posted 15 points this season.

Adam Blackwell, Austin Clifton and Connor Cronin rounded out the Division I Second Team for Victor. Blackwell and Clifton combined for three assists and two goals. Cronin compiled 54 saves in 769 minutes of guarding the net.

Uebelacker and Wolfe shared Division II co-Player of the Year honors. Wolfe was fourth in the county in scoring with 12 goals while adding three helpers. Of the eight games in which he scored a goal, the senior attacker netted multiple shots three times: two in a 5-2 win at Gates-Chili on October 17th and again in a 4-nil win over Webster Schroeder on October 26th and a hat trick in a 4-0 win over Irondequoit on October 21st.

Despite being a defender, Uebelacker finished tied for second on Spencerport with five goals along with three assists. The senior led a Rangers defense which pitched six shutouts as well. In those games, the Rangers outscored their opponents, 27-nil. Overall, Uebelacker helped the backline only allow 13 goals. The Rangers advanced to the sectional semifinals this season.

Caleb Bailey, Gaven Egan and Colton McCane made the Division II First Team for Churchville-Chili. Bailey was the Saints’ leading scorer with nine goals and two assists. Egan paced the offense with nine assists and a goal. McCane had four goals and three assists as a defender.

Chase Alexandre and Robbie Daly earned First Team honors for Brighton. Alexandre had two goals while Daly led a Barons defense which held opponents to 11 goals the entire season. Bryan Friedel (Irondequoit) and Dominic Lippa (Gates-Chili) rounded out the Division II First Team. Friedel scored one of the Eagles’ 13 goals this season. Lippa had a goal of his own.

Kladstrup and Rice shared Division III co-Player of the Year honors. Kladstrup was third in Monroe County in scoring with 14 goals and five assists to lead Pittsford Sutherland to the Class A title. Of the eight games in which he scored a goal, the senior midfielder netted multiple shots three times: two in a 3-nil win over Aquinas on October 27th, a hat trick in a 6-nil win over Canandaigua on November 4th and a season-high four goals in a 4-nil win over Pittsford Mendon on November 7th.

Rice led Greece Athena with eight goals and seven assists as the reigning state finalists sported a 9-3-1 record and advanced to the sectional quarterfinals. The senior midfielder recorded two goals and two assists in back-to-back games: on October 17th in a 7-nil win at Brockport and October 21st in a 5-2 win at Canandaigua.

Jeremiah Anandarajah and Dominic Tabechian made the First Team for Pittsford Mendon. Tabechian led the Vikings with six assists and five goals. Anandarajah posted three goals and one assist while helping the defense hold teams to one goal per game. Liam Fitzpatrick (Brockport) rounded out the Division III First Team.

Wetzel was second in Monroe County in scoring with 15 goals and one assist to lead Honeoye Falls-Lima to a 10-0-1 record and the top seed in Class A. Of the nine games in which he scored a goal, the senior midfielder netted multiple shots four times: two goals twice (5-nil season-opening win at Batavia and again plus one assist in a 6-1 win over Greece Olympia on October 24th) and two hat tricks (8-nil win at Greece Odyssey on Halloween and a 4-nil win at Greece Olympia on November 6th).

Noah Delcamp and Nick Grover made the Division IV Second Team for Batavia. Grover led the Blue Devils with six goals. Delcamp was the starting goalkeeper. Donovan Palma and Collin Thomas-Fayed rounded out the Second Team for Eastridge. The defender duo were part of a Lancers’ squad which held opponents to 1.4 goals per game.

Mike Butler (Greece Athena), John Cotsonas (Penfield), Brandon Every (Batavia), Tom Gillett (Irondequoit), Steve Grose (Webster Thomas) and Sean Hopkins (Pittsford Sutherland) earned Coach of the Year honors. Cotsonas led the Patriots to a 13-0-0 record and the Class AA sectional title. Gillett coached the Eagles to a four-game unbeaten streak after dropping their season-opening match. Grose led the Titans to the Division II league title and the No. 3 seed in Class A. Butler paced the Trojans to the Division III title and the sectional quarterfinals. Hopkins led the Knights to a 14-game unbeaten streak after dropping their season-opening match which included the Class A sectional title. Every coached the Blue Devils to the No. 3 seed in Class B1 and the sectional semifinals. 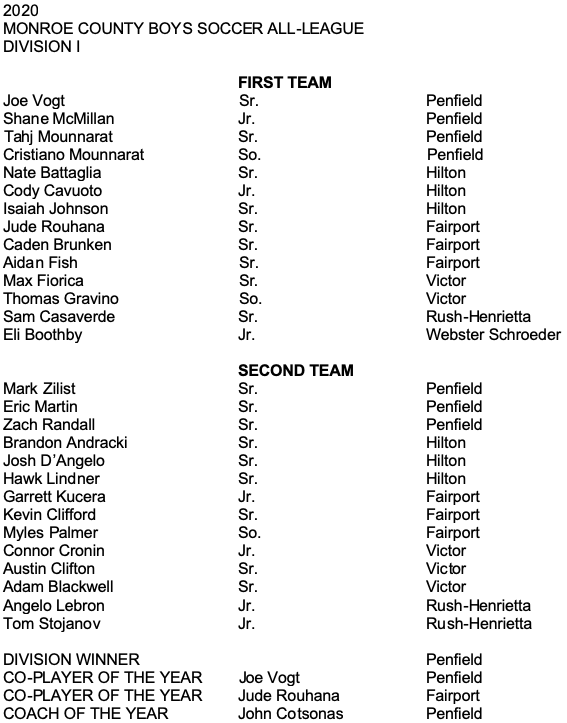 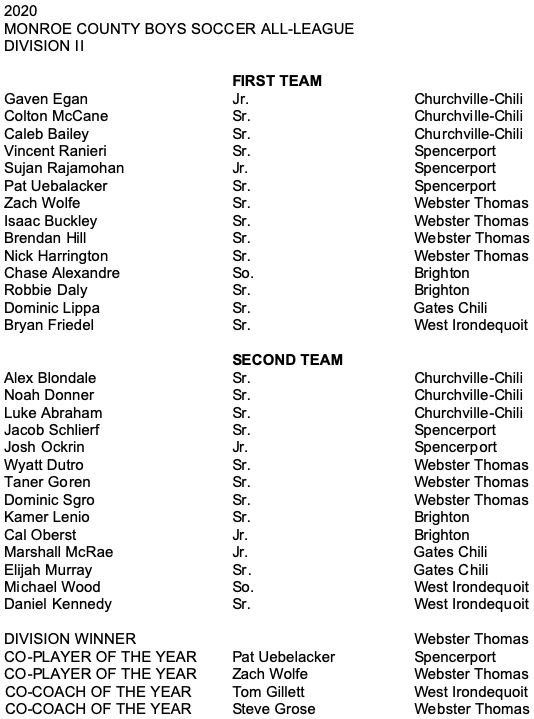 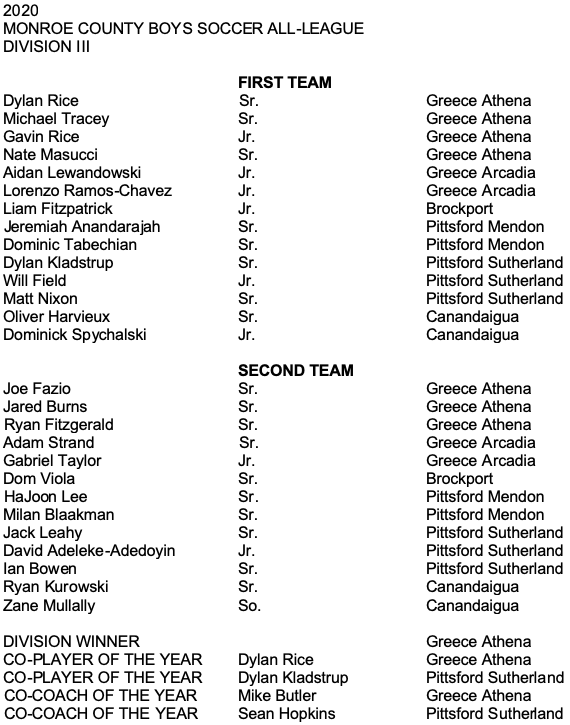 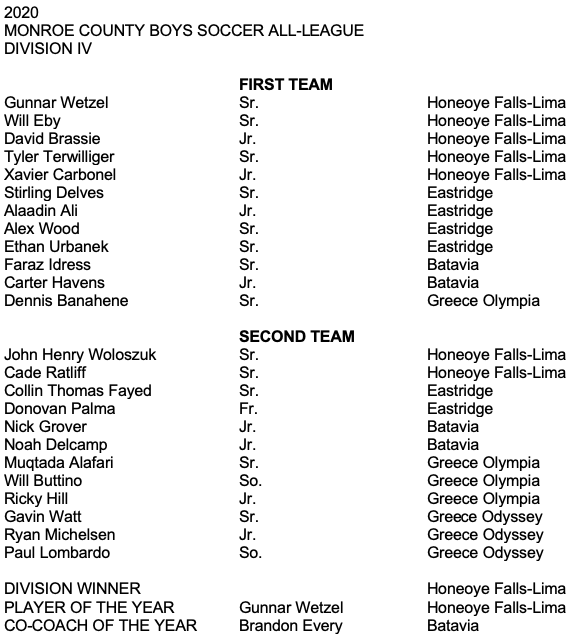