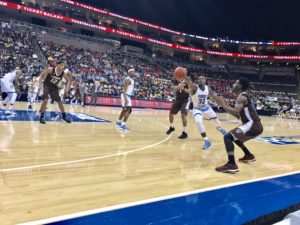 PITTSBURGH, PA — Hassan Martin netted eight of his 11 points in the final eight minutes of the first half as the Rhode Island Rams took a 32-26 lead over the St. Bonaventure Bonnies in the quarter-finals over the Atlantic 10 Tournament at PPG Paints Arena, Friday.

Leading by two, Martin scored back-to-back buckets in the lane. His jump hook gave URI a 29-24 advantage. The senior forward closed the stanza’s scoring when freshman Jeff Dowtin led him with a pass over Bona’s 1-3-1 defense for a lay-in and six-point advantage going into the break.

Rhode Island beat St. Bonaventure, 71-59 in the only regular-season meeting between the two teams on January 28th.

The winner gets Davidson in Saturday’s semi-finals.