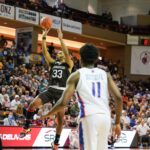 By CHUCKIE MAGGIO The St. Bonaventure Bonnies got back to basics. When the basics didn’t finish the job, they broke out some theatrics. Bona led the University at Buffalo by as much as 13 points with 11:38 remaining, but Buffalo stormed back to tie the game on Maceo Jack’s 3-pointer with 29 seconds left. SBU senior forward Jalen Adaway played hero, draining an open 3-pointer at … END_OF_DOCUMENT_TOKEN_TO_BE_REPLACED 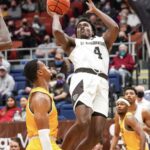 By CHUCKIE MAGGIO The 2020-21 college basketball season was far less tense without St. Bonaventure and the University at Buffalo meeting in a sold-out Western New York arena on a December Saturday. The UB program's COVID-19 pause canceled last year's planned Dec. 22 matchup.  The meeting with the 6-1 Bonnies and 4-2 Bulls at the Reilly Center on Saturday was already going to be … END_OF_DOCUMENT_TOKEN_TO_BE_REPLACED 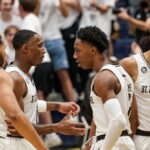 By CHUCKIE MAGGIO The St. Bonaventure men’s basketball team experienced a fortunate bill of health last season. The “Ironman Five” started all but one game, when Jalen Adaway came off the bench at Duquesne due to illness and recorded a double-double regardless. Jaren Holmes left the Rhode Island loss after just one minute with a back issue but returned for the next game three … END_OF_DOCUMENT_TOKEN_TO_BE_REPLACED 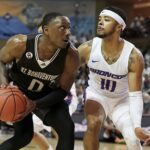 By CHUCKIE MAGGIO St. Bonaventure’s performance alone Wednesday night did nothing to assuage concerns that the team is in an early-winter slump. Bonnies fans left the Reilly Center with more concerns entirely. Kyle Lofton left the 93-81 victory over Coppin State with 51 seconds left, helped to the bench and eventually the locker room with an apparent lower left leg injury. … END_OF_DOCUMENT_TOKEN_TO_BE_REPLACED 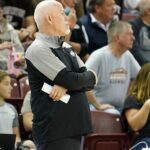 By CHUCKIE MAGGIO The last time the Associated Press booted a St. Bonaventure men’s basketball team from its Top 25 ranks, Bona’s self-proclaimed “Soul Patrol” of Matt Gantt, Greg “Bubba” Gary and Carl Jackson responded by leading a seven-game win streak. That 1970-71 team, which stood 10th in the poll a week earlier, dropped a 13-point home game to Villanova before a … END_OF_DOCUMENT_TOKEN_TO_BE_REPLACED