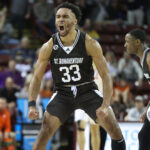 By CHUCKIE MAGGIO The St. Bonaventure men’s basketball team’s proclivity for defending without fouling figures to be useful against Rhode Island on Tuesday. Rhode Island is 29th in the country in free throw rate according to KenPom.com, attempting 496 foul shots in 25 games. The stripe has been a cumbersome area for David Cox’s Rams, who hold the nation’s seventh-worst team … END_OF_DOCUMENT_TOKEN_TO_BE_REPLACED 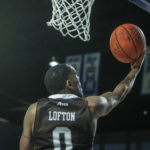 By CHUCKIE MAGGIO St. Bonaventure's disruptive big man was relegated to the bench in sweatpants, the Bonnies missing their trump card for a second straight Saturday afternoon due to concussion symptoms. Still, the Bonnies, backed by an exuberant Reilly Center crowd, went toe-to-toe with the Rhode Island Rams. Kyle Lofton maneuvered his way past Jeff Dowtin, exploded through the … END_OF_DOCUMENT_TOKEN_TO_BE_REPLACED 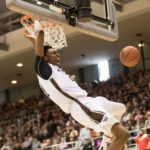 By CHUCKIE MAGGIO At press time, we know two things for certain about the Atlantic 10 Tournament, which starts Wednesday afternoon in Brooklyn, N.Y. The tournament will proceed as scheduled at Barclays Center, from the tip-off of the opening round game between St. Joseph's and George Mason to the championship on Sunday afternoon. And there will be fans, despite global concerns … END_OF_DOCUMENT_TOKEN_TO_BE_REPLACED 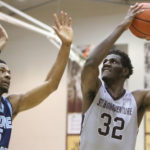 By CHUCKIE MAGGIO ST. BONAVENTURE -- The game, the first victory without Osun Osunniyi since the Toronto showcase against Rutgers, was within reach for the St. Bonaventure men's basketball team against Rhode Island on Saturday afternoon. A Jaren English steal that led to a Justin Winston corner three-pointer capped a 7-2 run to bring Bonaventure within three points of URI … END_OF_DOCUMENT_TOKEN_TO_BE_REPLACED 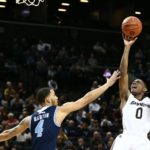 By CHUCKIE MAGGIO BROOKLYN -- The traditional freshman-senior roles were reversed during the last media timeout of the first half of St. Bonaventure's Atlantic 10 Tournament semifinal against Rhode Island on Saturday, and with good reason. Courtney Stockard and LaDarien Griffin hadn't made field goals yet, a slump that had the Bonnies facing a 29-17 deficit with 3:14 … END_OF_DOCUMENT_TOKEN_TO_BE_REPLACED