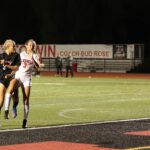 HILTON, N.Y. -- Hailey Van Zeilen scored twice and Ella Clark had a pair of assists as the Hilton girls' soccer team avenged an earlier loss with a resounding 4-0 win over Penfield, Thursday night at LeBeau Field. Leading 1-0, Van Zeilen won a ball at midfield and finished a 30-yard rush with her second goal of the season. "This game, we definitely wanted it," the … END_OF_DOCUMENT_TOKEN_TO_BE_REPLACED 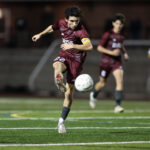 BROCKPORT (3-10-0) 0GATES CHILI (4-8-1) 1Sebastian Guerrero scored in the 50th minute to lead Gates Chili. Mohamed Shaibi assisted on the play. GREECE ATHENA (7-5-1) 0AQUINAS (7-4-2) 1 OTAlfonso Vito connected on a golden goal in the first overtime to lift Aquinas. Vito's tally was his team-leading eighth marker of the season. Iesa Mohammed had an assist on the play. LJ … END_OF_DOCUMENT_TOKEN_TO_BE_REPLACED 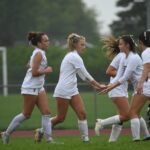 WAYNE (7-6-0) 5GREECE ARCADIA (2-10-0) 1Addison Rice found the back of the net on a pair of occasions while Trinity Surowiec and Bailey Cook had a goal apiece as Wayne jumped to a 4-nil lead at halftime and went on to win for the third time in the past five games. Denalli Derks added an insurance goal in the second half for the Eagles. Abigail Brown made 11 saves in the … END_OF_DOCUMENT_TOKEN_TO_BE_REPLACED 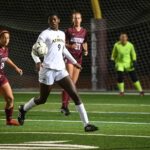 ROCHESTER, N.Y. -- Wrianna Hudson's golden goal in the second overtime was the difference as the Greece Athena girls' soccer team defeated host Aquinas, 1-0 in non-league action, Monday. Hudson converted a free kick from just outside the 18-yard box as the Trojans rebounded from a loss Monday night to win for the third time in four games. "The goalie was in the middle," … END_OF_DOCUMENT_TOKEN_TO_BE_REPLACED 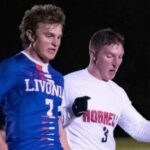 LIVONIA, N.Y. -- For the second time this season, the boys' soccer teams from Hornell and Livonia faced each other. Chances are Monday's matchup won't be the last meeting between these Class B1 contenders. Jack Emo's finish in the 71st minute was the difference as Hornell avenged an earlier loss with a 2-1 victory over host Livonia. "It feels good," Emo said after … END_OF_DOCUMENT_TOKEN_TO_BE_REPLACED