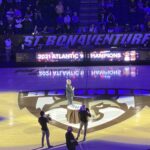 By CHUCKIE MAGGIO ST. BONAVENTURE — Several St. Bonaventure Bonnies rosters have been projected during preseason, on paper, as 15th-year head coach Mark Schmidt’s deepest. Tuesday night’s season opener against Siena was the first tangible evidence, albeit against an inferior opponent, to suggest the 2021-22 squad has the strongest bench yet. Bona won its first game as a … END_OF_DOCUMENT_TOKEN_TO_BE_REPLACED 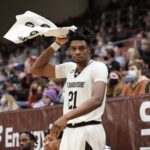 By CHUCKIE MAGGIO Mark Schmidt joked last week that he wished the pregame banner raising ceremony on Tuesday night could be held another time. “I wish we could just put the banner up and start drinking some beers,” he cracked, “but we can’t do that. It’s an exciting time.” Schmidt and his St. Bonaventure Bonnies have had all summer and the early fall to reflect on their 2020-21 … END_OF_DOCUMENT_TOKEN_TO_BE_REPLACED 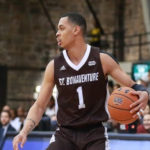 By CHUCKIE MAGGIO St. Bonaventure will open its much-anticipated 2021-22 men's basketball season with a chance to immediately earn some hardware: the Franciscan Cup. Bona announced Tuesday that it will host sister school Siena at the Reilly Center on Tuesday, Nov. 9, the opening day of the NCAA season. Tip-off is scheduled for 7 p.m. The Bonnies and Saints have entered into a … END_OF_DOCUMENT_TOKEN_TO_BE_REPLACED 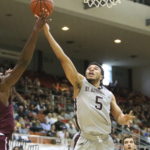 By CHUCKIE MAGGIO St. Bonaventure is likely taking its annual matchups with the Vermont Catamounts and Siena Saints to Mohegan Sun's "Bubbleville," according to CBS Sports insider Jon Rothstein and SBUnfurled. Vermont joins Stephen F. Austin and Towson as confirmed opponents for the multi-team event that will begin the 2020-21 college basketball season in Uncasville, Conn. … END_OF_DOCUMENT_TOKEN_TO_BE_REPLACED 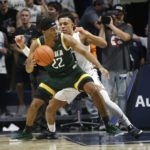 By BILLY HEYEN Siena sophomore Jalen Pickett was named the Metro Atlantic Athletic Conference's men's basketball Player of the Year on Wednesday. The Aquinas alumnus earns the honor a year after being named the MAAC's Rookie of the Year last season. https://twitter.com/ByMichaelKelly/status/1237762279145340931 Pickett has averaged 15.3 points, 6.0 assists, 4.5 rebounds, 1.1 … END_OF_DOCUMENT_TOKEN_TO_BE_REPLACED