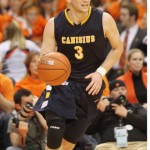 Taken from gogriffs.com BRIDGEPORT, Conn. - Rider University shot 56 percent in the second half, and made four 3-pointers in a four-minute stretch, to pull away from the Canisius College men's basketball team as the Golden Griffins lost 79-64 in the quarterfinals of the 2011 Spark Energy MAAC Championship at the Webster Bank Arena at Harbor Yard on Saturday. The Golden … END_OF_DOCUMENT_TOKEN_TO_BE_REPLACED 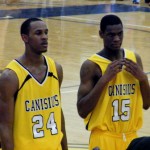 By Paul Casey Gotham LAWRENCVILLE, N.J. -- Gaby Belardo hit a jumper in the lane as the shot clock expired with 7.8 seconds remaining in the game as the Canisius Golden Griffins knocked off the Rider Broncs 67-65 Friday night in Metro-Atlantic Athletic Conference action at Alumni Gynasium. Belardo's basket capped a late rally by the Griffs. Down 65-62, senior Greg … END_OF_DOCUMENT_TOKEN_TO_BE_REPLACED 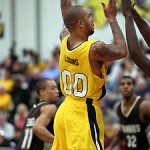 By Paul Casey Gotham BUFFALO, N.Y. -- Scott Machado stood at the top of the key shaking his head. To his left, Jermel Jenkins extended his arms in a gesture of disbelief. Under the basket, Mike Glover was doubled over clutching his shorts. Not exactly the picture one would expect from a first-place team in the final moments of a conference game. Gaby Belardo finished a … END_OF_DOCUMENT_TOKEN_TO_BE_REPLACED 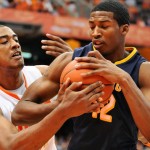 By Paul Casey Gotham BEAUMONT, Texas -- The Canisius Golden Griffins stared an unflattering trend in the face. Entering play Tuesday night, the Griffs were 0-4 when trailing at the half. After taking an early 10-4 lead, the Griffs found themselves behind 32-30 going into the break. It was time to put an end to the streak. Tomas Vazques-Simmons and Alshwan Hymes led a … END_OF_DOCUMENT_TOKEN_TO_BE_REPLACED 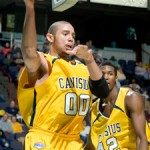