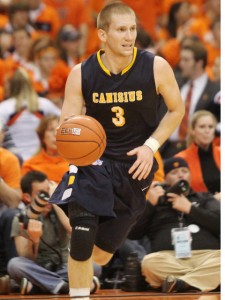 BRIDGEPORT, Conn. – Rider University shot 56 percent in the second half, and made four 3-pointers in a four-minute stretch, to pull away from the Canisius College men’s basketball team as the Golden Griffins lost 79-64 in the quarterfinals of the 2011 Spark Energy MAAC Championship at the Webster Bank Arena at Harbor Yard on Saturday. The Golden Griffins finish the season with a 15-15 record.

Senior Elton Frazier led Canisius with 17 points on 8-for-13 shooting. Senior Greg Logins had 12 points and six rebounds while seniors Robert Goldsberry and Julius Coles each had 11 points, combining for five 3-pointers.

“We cut it to three points, fighting and scrapping to get back into the game. They made some pretty opportune 3-pointers and you have to give them credit,” Canisius head coach Tom Parrotta said. “They took away some of our offense and we had some costly turnovers early. I think we deserve some credit for not folding. We just couldn’t get over the hump. We got a lot of shots tonight, and just didn’t make them.”

Canisius scored the first six points of the game, getting a 3-pointer from Goldsberry and Gaby Belardo to take the early 6-0 lead. The Broncs then held Canisius scoreless for nearly seven minutes as Rider scored 12 straight points to take its own six-point lead. A layup from Frazier ended the run, but a 3-pointer from Justin Robinson put the Broncs up by seven.

Canisius scored six straight points, getting a layup from senior Tomas Vazquez-Simmons, free throw from sophomore Alshwan Hymes and 3-pointer from Goldsberry to cut the lead to 15-14. After a layup from Mike Ringgold, a pull-up 3-pointer from Hymes tied the score at 17-17. Rider went on a 10-2 run to go up 27-19 after a 3-pointer from the wing from Brandon Penn. A 3-pointer from Coles ended the Rider run as the Broncs took a 31-25 lead into the locker room.

Rider attacked the inside to start the second half, scoring its first 12 points in the paint to take a double-digit lead. The Griffs cut the lead to 45-39 after a steal and breakaway layup from Belardo. The Broncs pushed the lead back to 10 points before a 3-pointer from Goldsberry and hook shot from Logins cut the Rider lead to 49-44.

After a Rider basket made it 51-44, Coles scored four straight points to make it a three-point game. The Broncs then made four 3-pointers – their only four 3-pointers of the half – during a four-minute span to re-open a double-digit lead, going up 63-52 after a 3-pointer from Robinson from the corner with just over five minutes remaining. Canisius never cut it to less than nine points the rest of the way as Rider went 10-for-13 from the free-throw line down the stretch.

Notes: Canisius earned the No. 6 seed in the postseason for the first time since 1998… Canisius received a first-round bye for the first time since 1999… Canisius and Rider met in the postseason for the fourth time and for the first time since the quarterfinals in 2008. Rider has won three of the four all-time meetings… The loss ends Canisius’ string of at least one postseason victory in six-straight years… Frazier scored in double figures in the final 12 games of his career as a Griff… Logins will go down as one of five players in school history to score more than 1,200 career points to go with more than 750 career rebounds… Redshirt freshman Reggie Groves pulled down a career-high six rebounds in the loss… Hymes finished the season with 69 3-point field goals, the most for a Canisius player since Chuck Harris made 70 treys in 2006-07… Vazquez-Simmons had one block in the loss to give him 273 for his career, which is tops in Canisius history and second all-time in MAAC history.