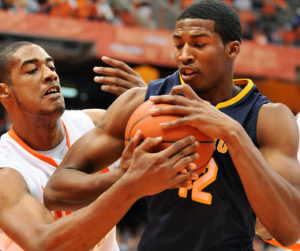 BEAUMONT, Texas — The Canisius Golden Griffins stared an unflattering trend in the face. Entering play Tuesday night, the Griffs were 0-4 when trailing at the half. After taking an early 10-4 lead, the Griffs found themselves behind 32-30 going into the break.

It was time to put an end to the streak.

Tomas Vazques-Simmons and Alshwan Hymes led a second half comeback as the Canisius Golden Griffins defated the Lamar Cardinals in a non-conference match-up 78-72.

Vazques-Simmons and Hymes saved their production for latter stanza. The two contributed zero points before the horn and 22 points in the second frame.

Leading by three, Hymes connected on consecutive possessions – first with a jumper from the right side and then a 3 to pace the Griffs. Hymes picked off an errant pass at the other end of the floor, Elton Frazier followed with two of his 22 points. Two possessions later, Frazier fed Hymes. The sophomore nailed another trifecta, and Canisius had their largest lead of the game 61-51.

Vazques-Simmons brought the game home. The senior forward combined with Gaby Belardo on a pair of pretty pick and roll plays. First, Belardo led Vazques-Simmons for a lay up. On the ensuing possession, Frazier corralled a Belardo and slammed it home. Vazques-Simmons all but sealed the victory on the next play when he stepped back from a ball screen and knocked down a three-pointer to give the Griffs a 69-59 lead with four minutes remaining.

Frazier led the way with 22 points including a pair of clutch one-and-one free throws in the game’s final minute. It was the senior’s second 22-point performance in a row. Frazier has scored in double figures in each of Canisius’s last four games.

Julius Coles registered a career and game-high 12 rebounds. The Griffs controlled the glass 45-33.

Marial Dhal made his presence felt with just 10 minutes of playing time. The seven-footer from Uganda pulled down three rebounds and blocked two shots.  In a 20 second sequence Dhal rejected Vincenzo Nelson’s jumper, grabbed the rebound and kept the play going at the opposite with an offensive board. Belardo took advantage and hit a three-pointer.

Lamar came into the game leading the Southland Conference and ranked third in the country scoring 89 points per game. Mike James and Donley Minor came off the bench to lead the Cardinals with 13 and 12 points apiece.  Anthony Miles was a perfect 8-8 from the free throw line and also scored a dozen.

Canisius improves to 5-6 with the win.The Griffs ended a two-game skid. Canisius fell at Northwestern State Sunday evening 86-74 in a game where the Griffs were whistled for 31 personal fouls. Greg Logins scored 17 points before fouling out after 12 minutes of play. The senior became the 30th in program history to top the 1,000 point plateau.  The Griffs get a chance at payback when Northwestern State visits the Koessler Athletic Center on December 29th.