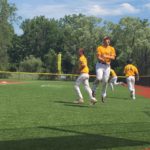 By BILLY HEYEN EAST IRONDEQUOIT, N.Y. — Bases loaded. Two outs. Bottom of the seventh. Winning run on third. Rayson Miller couldn’t have asked for a better spot for the hottest hitter in District 7, Jason Bocklage, to come to the plate with a chance to send his team to the state tournament. “J Bock has been clutch all season,” said Rayson Miller first baseman Owen … END_OF_DOCUMENT_TOKEN_TO_BE_REPLACED 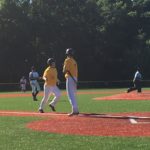 By BILLY HEYEN EAST IRONDEQUOIT, N.Y. — Greece Post’s Michael Mule turned on a ball and sent it to deep right field. He’d been hitting line drives all postseason. But on Tuesday, the game wasn’t about Mule. It was about the guy in right field, Rayson Miller’s Jason Bocklage. Bocklage turned and took off as soon as the ball left the bat. The right-field foul pole at … END_OF_DOCUMENT_TOKEN_TO_BE_REPLACED

By BILLY HEYEN Top-seeded Rayson Miller expected to win both games Sunday, said head coach Tom Sapienza. But Greece Post was able to pull out the first game of the doubleheader, 6-5. Rayson Miller controlled most of game two, eventually winning 11-7. That forced a decisive third game to decide whether the one or the four seed heads to the championship series. Irondequoit … END_OF_DOCUMENT_TOKEN_TO_BE_REPLACED 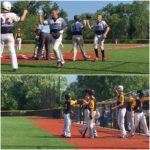 By BILLY HEYEN EAST IRONDEQUOIT, N.Y. — Baseball is a game of inches. Greece Post, the four-seed and underdog against top-seeded Rayson Miller, will get to play a deciding third game of a best-of-three semifinal in part because of the last few inches of Michael Mule’s glove. With two outs in the bottom of the seventh in game one, Rayson Miller got runners on first and … END_OF_DOCUMENT_TOKEN_TO_BE_REPLACED