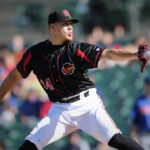 By CHUCKIE MAGGIO The Buffalo Bisons were the only team in the International League with fewer than 400 batting strikeouts, carrying 391 punchouts into Saturday’s action. Cade Cavalli spoiled that distinction, striking out 10 Bisons in a complete game (seven-inning doubleheader) victory. He completed seven innings for the second consecutive start, yielding just one run on five … END_OF_DOCUMENT_TOKEN_TO_BE_REPLACED 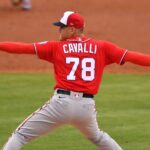 By CHUCKIE MAGGIO Dirt caked the front of Cade Cavalli’s Rochester Red Wings uniform as he trotted off the pitcher’s mound for the start of his personal offseason. Cavalli’s last appearance of 2021 was littered with bounced pitches and basepath traffic. He retired just two of the seven Scranton/Wilkes-Barre RailRiders he faced, tagged for four earned runs in just two-thirds of … END_OF_DOCUMENT_TOKEN_TO_BE_REPLACED

By CHUCKIE MAGGIO Of all the Triple-A pitching debuts made in a Red Wings uniform over the last few decades, Francisco Liriano provided the standard with a six-inning, one-hit effort on June 20, 2005. Liriano struck out eight Louisville batsmen, retiring 11 in a row at one point. Liriano remains the standard, as top Washington Nationals pitching prospect Cade Cavalli … END_OF_DOCUMENT_TOKEN_TO_BE_REPLACED