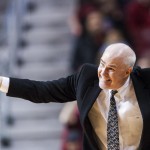 By CHUCKIE MAGGIO Mark Schmidt had, true to form, waited a while before clearing his bench. His Bonnies, galvanized by a 32-12 run over 12 minutes, had turned their Friday night contest with George Washington into a rout. They led 74-33 with 6:31 remaining when Schmidt relented, putting Jalen Adaway, Kyle Lofton, Osun Osunniyi and Dominick Welch on the bench. … END_OF_DOCUMENT_TOKEN_TO_BE_REPLACED 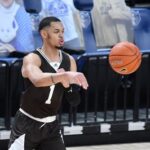 By CHUCKIE MAGGIO The St. Bonaventure Bonnies make no bones about it: they scoreboard-watch like the rest of us. "We'll be in the back of the bus or in the locker room checking, or at the houses watching games and checking scores, stuff like that," Dominick Welch remarked. "Just keeping ourselves updated." The scenario is simple now, simpler than it was when St. Bonaventure … END_OF_DOCUMENT_TOKEN_TO_BE_REPLACED

Courtesy of GoBonnies.com NEWPORT NEWS, Va. – The scheduled Saturday afternoon men's basketball game between St. Bonaventure and George Washington has been postponed due to virus concerns within the Colonials program. George Washington notified Atlantic 10 and St. Bonaventure officials of a positive COVID-19 test result from a Tier 1 staff member in the team's traveling party … END_OF_DOCUMENT_TOKEN_TO_BE_REPLACED

Courtesy of SLUBillikens.com ST. LOUIS – Saint Louis held off a late charge by George Washington and came away with a 63-58 Atlantic 10 Conference victory Wednesday night at Chaifetz Arena. The Billikens improved to 13-3 overall and 2-1 in league play. The Colonials fell to 6-9, 0-2. Jordan Goodwin led all players with 20 points (7-of-10 FG), his third outing of 20 or more … END_OF_DOCUMENT_TOKEN_TO_BE_REPLACED