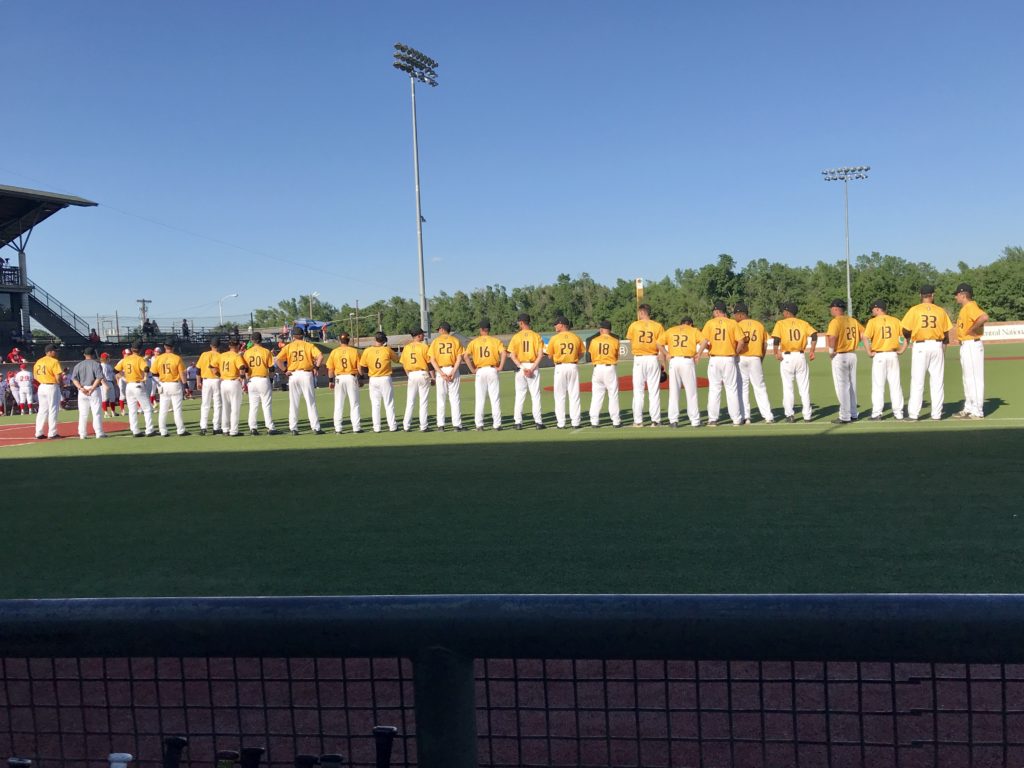 Cas Sobaszek reached base three times in the game including a base on balls in the third inning when Monroe pulled within two runs at 5-3. Matt Pilarczyk started the stanza with a walk. Matt Wagner hunted down a first-pitch fastball and knocked a single into left center to spark the rally.

Justin Bunting followed with a sacrifice bunt, and Brennen Smith put the Tribs on the scoreboard with an RBI base hit.

Andrew Czubaj brought in another run when the MCC catcher worked a bases loaded free pass, and Phil Ferranti capped the inning with an RBI-sacrifice fly.

It looked like the Black and Gold would add more runs, but Sinclair centerfielder Sean Darmafall chased down Sam Loew‘s drive into the left center gap for the final out of the inning.

“We got out of that inning what we needed,” head coach Dave Brust said. “We needed another inning or two just like that.

“What we saw was our ability to put together good at bats. Matt Wagner going after a first-pitch fastball really set the tone. We executed a sacrifice bunt and put ourselves in position.”

Brennen Smith gets the @MCCTribunes on the board with a one-out single in the 3rd. pic.twitter.com/yO2GG2wI3s

The Black and Gold managed just two more hits for the rest of the game.

Frankie Pizzo came out of the bullpen and hurled four shutout innings before allowing a pair of runs in the sixth. The sophomore right-hander struck out two and walked two.

“He pitched really well,” Brust said. “Frankie has shown in the postseason what he is capable of doing. He changed his arm angle a couple weeks and added sink to his fastball. That made him more effective.”

Sinclair added a run in the seventh and another in the eighth.

Ferranti collected his 76th hit of 2018 with a leadoff single in the ninth. Nate Grabowksi (2008) holds the single-season program mark with 87. Ferranti’s third-inning RBI was the freshman’s team-leading 63rd of the year.

Tribunes Sweepin’ Down the Plain: Matt Petrossi and the long road back

Tribunes Sweepin’ Down the Plain: Stu Martin and the evolution of a closer

Tribunes Sweepin’ Down the Plain: Jonathan Catapano masters the right side

Tribunes Sweepin’ Down the Plain: Czubaj’s role has been one of adjustments

Tribunes Sweepin’ Down the Plain: Bunting settles in at first base

Patience pays dividends for the Tribunes

Sobaszek ended the campaign with an on-base percentage of .535 – good for 14th in the country. Of the 13 players in front of the freshman shortstop, only three played more games.

Monroe won 18 straight games leading into the World Series – the longest streak in NJCAA DII and the best run in program history since the 2005 squad which won 21 in a row. Hall-of-Fame coach Dave Chamberlain led the 1989 team to a program-record 29 consecutive wins.

The NJCAA World Series appearance was the ninth in MCC history and second in three years under Brust. Monroe’s 2008 club finished a program-best third place.