St. Bonaventure’s Dion Wright went off for a career-high 26 points Wednesday night as the Bonnies defeated the University of Buffalo, 60-58 in Big 4 action at Alumni Arena. Wright, nicknamed the “Worm,” connected on 12 of 19 shots from the floor. The variety of those buckets deserves a screen by screen breakdown. 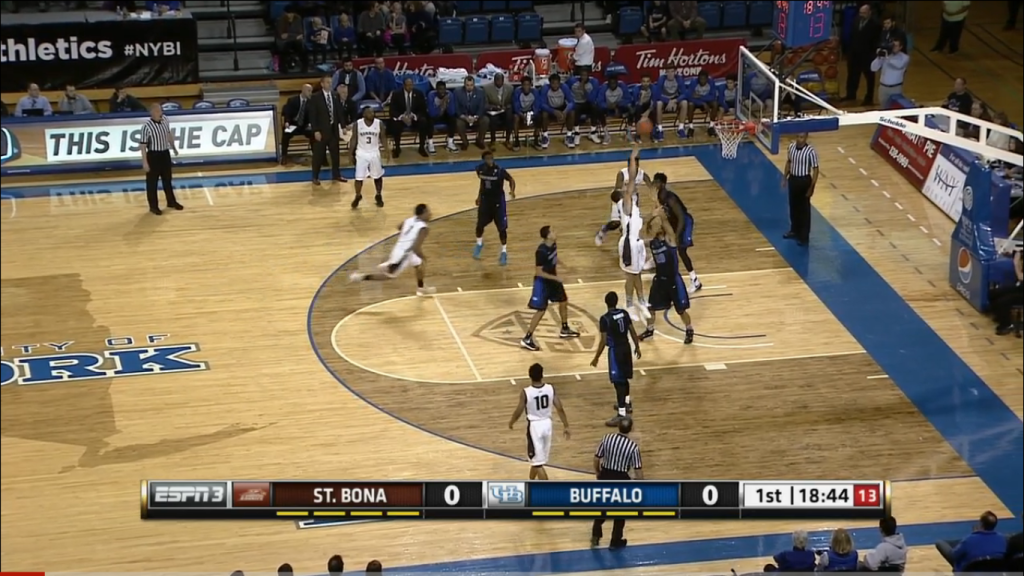 Wright opened the scoring for the night with a jump hook in the lane. This play started with the senior forward setting a ball screen on the right side of the floor. Bona reversed sides of the floor, and brought it back to Wright in the lane.

St. Bonaventure coach Mark Schmidt: “Some guys have a hard time scoring. Dion has a talent when it comes to putting the ball in the basket. He does it in a variety of ways.” 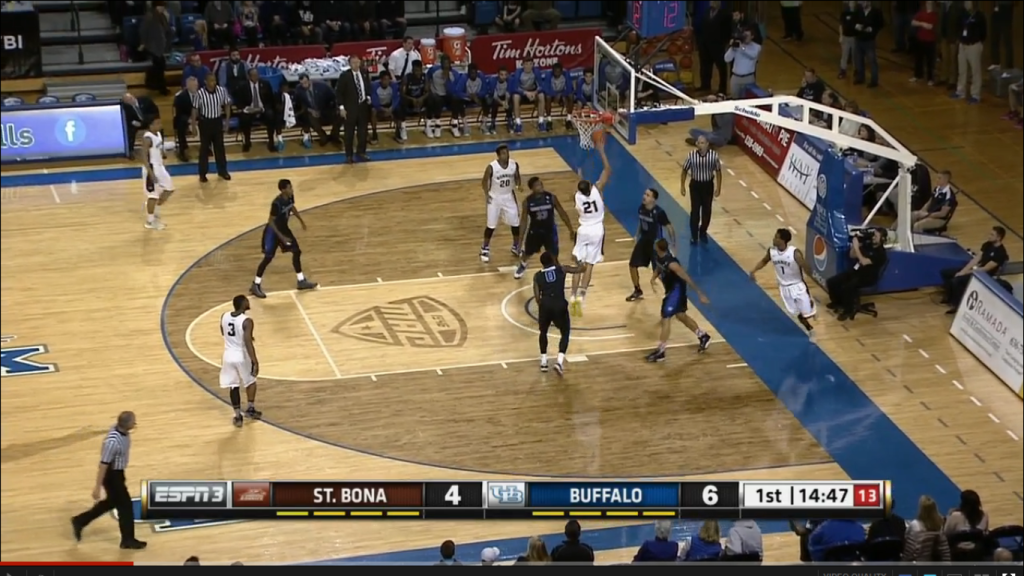 Wright knotted the game at six when Idris Taqqee (1) drove baseline and dished it for a lay in. 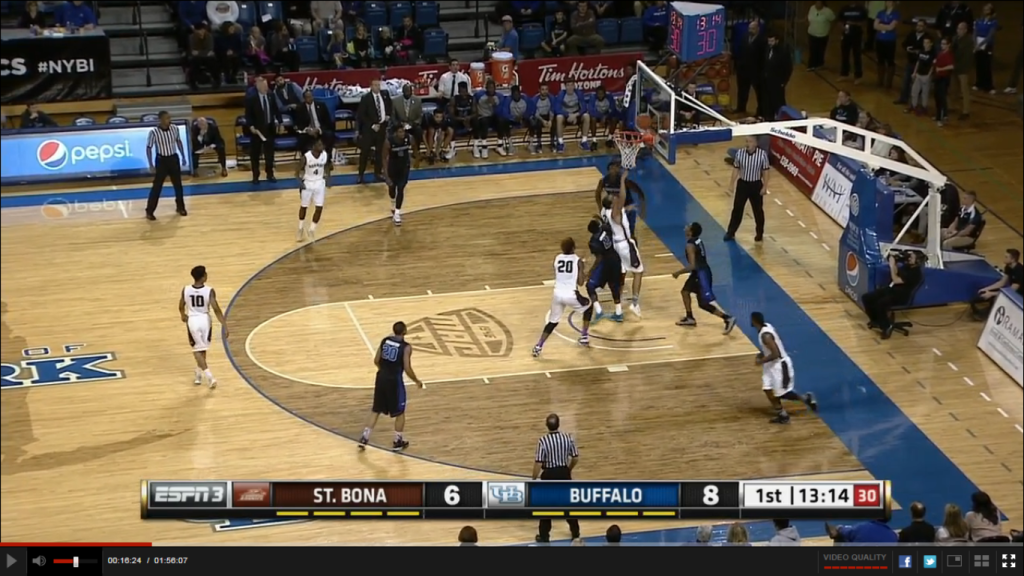 Wright grabbed an offensive rebound and converted the putback. Taqqee saved a ball from going out of bounds and led Wright into the open court for a dunk and a 10-8 Bona lead. Two dribbles going left and a runner made it 14-12 Bona. Wright set a ball screen for teammate Marcus Posley and flattened out into the gray area for a catch-and-shoot baseline jumper and a 23-22 Bona edge.

Posley: “The hotter he is the more we play through him. Dion carried us.”

Three dribbles to the right and a runner off the window gave Bona a 27-24 advantage.

UB coach Nate Oats: “Maybe we should have found a better matchup for him earlier. We had worked on doubling him.” Kaputo drove baseline again and fed Wright for his final basket of the first half. Sixteen points on 8-of-11 shooting. Bonnies went to the locker room with a 38-33 lead. After converting two free throws earlier in the second half, he uses two dribbles going right from beyond the arc and Wright finishes over a defender in the lane. Bona 50 UB 43.

Oats: “When he’s driving it from 20 feet, it’s not really a time to go double a guy. You just got get tighter in the gaps and kinda try to pinch that thing out.” 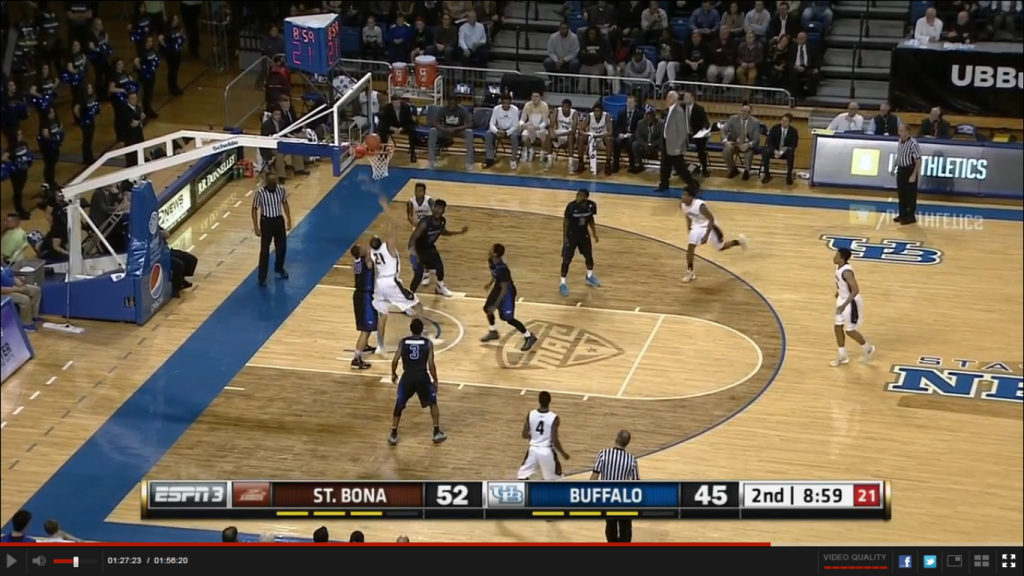 Jaylen Adams feeds it to Wright below the block. A baseline jump hook makes it 54-45 SBU.

Oats: “We had worked on post doubles. He got the ball so deep on the post catches that it was too late to double him on some of those catches.” Wright matched his career high when he used a screen on the block to get free for a catch at the left elbow. Two dribbles later he finished a running jump hook on the right side of the lane. 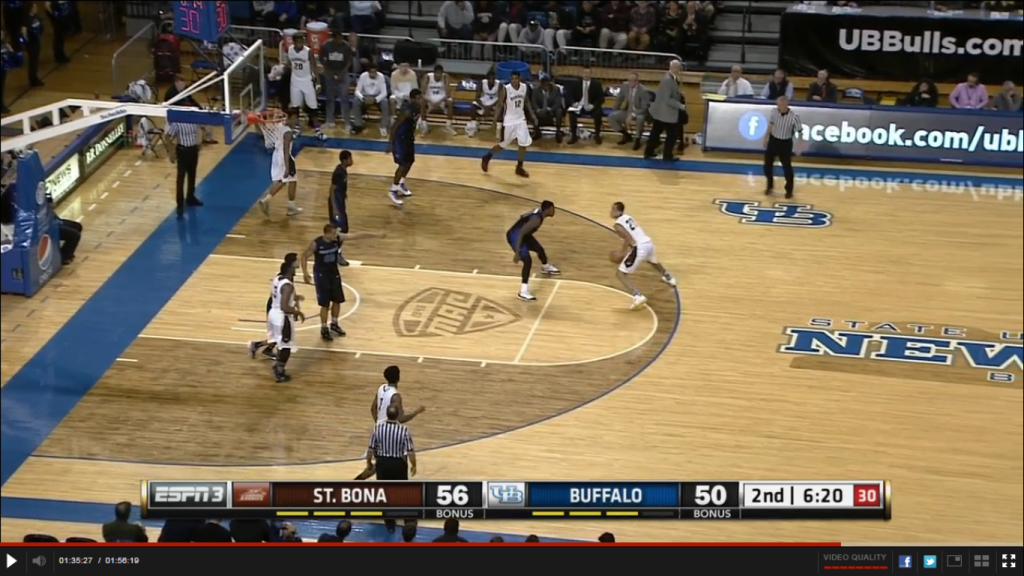 Wright’s final basket for his career high requires a series. First, here is the catch off an inbound pass, and he goes left. Two dribbles into a spin move, and he creates space in the lane. And one more jump hook over the outstretched arm of a defender for 26 points on 12-of-19 shooting.

Oats: “He’s got like the YMCA game a little bit. I’m not going to be sad to see him leave for sure.”

Schmidt: “I’m not sure if Dion knows what he’s doing, but the ball goes in. A lot of times it looks unorthodox, but it goes in. And that’s part of the difficulty guarding him because he is so unorthodox.”

Posley: “Dude’s crazy. He can throw the ball up at the rim without looking, and it will go in.” Bona ran the game winner for Wright. Using a high 1-4 set, Wright started on the right elbow. He caught the ball on the left side. When UB’s defense collapsed in the lane, he dished to Posley for the winner.

Posley: “All the credit goes to Dion. He kept us in the game. Dion carried us the whole way.”