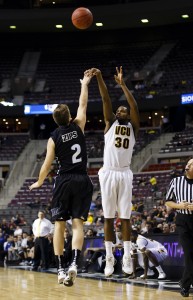 Facing Virginia Commonwealth University with a fully healthy squad can seem feel like climbing up Mount Everest for many teams. Face them without your starting point guard and well, you might as well be walking across a highway blindfolded.

And that’s exactly what happened to the Akron Zips as they faced off against VCU in the second round of the NCAA Tournament. The Zips, winners of 22 of their last 24 games, could not gain any momentum against a havoc defense that just suffocated them from start to finish as they competed without their starting point guard.

After coming out strong, no doubt inspired by the losses of two players to sickness, the Zips trailed the Rams just 8-6 in the opening minutes. But the Rams flipped the switch and turned the defense on high, blinding Akron as they went head-on into havoc, helping the Rams to a 13-2 run which would foreshadow what would come the rest of the game.

VCU advanced easily to the Round of 32 with a 88-42 victory, setting the NCAA record for the biggest margin of victory between a No. 5 and No. 12 seed. The previous high was 35 points which last happened in 2007 when Tennessee defeated Long Beach State.

“Our guys did a nice job tonight executing the plan. I got a ton of respect for Keith and his kids and their program.  They got a great program,” VCU coach Shaka Smart said. “They had a phenomenal season.  This was just a better matchup for us tonight, and that’s why we were able to win.”

Heading into the match-up with the Zips, VCU knew that they would be undersized — something they have had to deal with all season long.

“Hey, they are a lot bigger than us,” Juvonte Reddic said during yesterday’s press conference. “You know, we play a lot of teams that had an advantage with size but we have our advantages to. It really comes down to who wants it more.”

For all the focus on the size of the Zips, VCU out-rebounded Akron by a 36 to 29 margin and held them to just 34.1 percent shooting, well below their 45 percent average for the season. VCU’s defense just completely shut-down Akron, holding them without a field goal for a over a 10 minute stretch in the second-half.

But while VCU’s defense stole the show by essentially guiding the Zips off a cliff, perhaps more important to the Rams’ future success is the shooting of Troy Daniels.

Daniels entered the game against the Rams after coming off a dismal outing in the Atlantic 10 Championship game. The sharpshooter who entered the game with 111 3-pointers made, surpassing his own single-season record of 94, did not record a single point, going 0-for-5 from the field while fouling out of the contest.

Daniels, like the rest of his teammates, were frustrated by Saint Louis’ defense but vowed to make up for the poor performance and the senior did just that.

The sharpshooter scored 23 points on 8-of-13 shooting, including 6-of-11 from 3-point range to lead all scorers. The difference in this game from the the match-up against Saint Louis was being able to set up the press.

“I was making shots.  We were getting to the press.  That’s great,” Daniels said. “We have, you know, a press where if we’re missing shots we still can get in there, but it was just to our advantage when we were making shots we were able to get in our press and start defense.”

But having the basket look like the ocean to Daniels also helped the Rams in another facet of the game. It helped them get the ball inside to Reddic.

The Rams junior forward established position on the bigger Zips all night and finished with authority around the rim. Akron has no answer for his drop-steps, pivot moves and up and unders as Reddic scored 21 points on an efficient 9-of-12 shooting from the field.

And did the Rams ever put pressure on Akron.

VCU forced the Zips into 22 turnovers while the Rams turned the ball over just seven times themselves. The Rams were not only the more aggressive team, but the more relaxed team. After all, they have made the NCAA Tournament home for the last few year.

“A lot of guys, they played in the tournament and we used that tonight,” Daniels said. “You know, we’ll use it for the rest of the tournament, and we just have to buy into the plan. If we do that, we’re be great.”

Winning by 46 points great? Probably not, but it’s become clear that this is not the cinderella team of two years ago. This VCU squad is no longer taking opponents by surprise. Michigan will be ready for a battle, but will they be ready for a war?

Because that’s what VCU will make it — a war to decide who survives and advances to the Sweet 16. And if Daniels is stroking more threes, Reddic is dominating inside and the press is suffocating, it will be like trying to stop an avalanche, leaving Michigan with no hope.