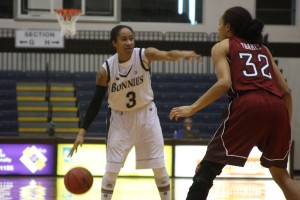 ST. BONAVENTURE, N.Y. — Alaina Walker stepped through the tunnel of the Reilly Center and onto the court for the last time as a member of St. Bonaventure Women’s Basketball team.

Accompanied by her mother, Walker walked up to Bona coach Jim Crowley and embraced the man who she embodied through her play in each game — all out intensity, hustle and a fighter.

And while the Bonnies had already been eliminated from qualifying for the Atlantic 10 Conference Tournament for the first time since the 2005-06 season, Walker had one more fight left in her. She aimed to snap the nine-game losing streak and end the season on a winning note, something that has defined her career up to this point.

However, as Walker took to the court with music playing and the referee about to toss the ball in the air to open play, she could not help but lose focus, knowing this was her last time to make a first impression.

“Yea, it hit me,” the soft-spoken Walker acknowledged. “Then after that final buzzer went off, it kinda set in that it’s my last game. Unfortunately, you can’t come back. You got to move on.”

But before she did, Walker had to leave her lasting mark on a program that for years represented a doormat for A-10 opponents, only to recently become a preeminent power in the conference.

Facing a La Salle team that was on a four-game skid of their own, Walker made sure they would head back to Philadelphia feeling no love from the Bonnies. After Bona stormed out to a 5-2 advantage, the senior guard led a fast break and wiggled her way into the paint for a lay-up and forcing the Explorers to call their first timeout.

It would not change much the rest of the way as Walker was able to drive to the hoop with ease, sometimes taking it coast-to-coast for acrobatic lay-ups and powerful finishes. And on senior day, it was only fitting that Walker was the star, scoring 18 points on 8-of-14 shooting in a 71-58 Bona victory.

It marked just the third conference win of the season for the Bonnies (10-19, 3-11) after a magical run to the Sweet 16 last season. Graduating four seniors hurt Bona in the leadership department.

With only one senior in the starting lineup following Chelsea Bowker’s injury, the bed was made.

“This isn’t where we wanted to be on March 3, 2013, but it is where we’re at,” Crowley said. “I’m glad we could get a win for this kid sitting next to me (Alaina) whose given so much to the program that we could at least send her out on a positive note.”

Walker has proved invaluable to the Brown and White’s success over the course of her four-year career. While it was Jessica Jenkins, Megan Van Tatenhove and Armelia Horton who received much of the accolades, Bona would not have had as much success without the play of Walker.

“Alaina has the greatest skill we could ever ask for in a player,” Crowley said. “And it’s effort. Effort is a skill and she has it. She’s exactly what we want our players to be like.”

A member of the Atlantic 10 Conference’s All-Defensive Team, Walker helped shut-down opposing guards and forwards alike, keeping Bona ranked in the top half of the conference on defense.

The 5-foot-9 guard racked up 107 steals, 38 blocks and dished out 190 assists during her time with the Bonnies. However, with just 1:23 left in regulation against La Salle, Walker jumped high into the air and corralled her fifth rebound of the contest.

Why is that rebound significant?

It was career rebound No. 600, making her just the 10th St. Bonaventure player to reach that mark as she averaged 4.8 rebounds per game over her career.

Only one St. Bonaventure player grabbed 600 plus rebounds and was shorter than the 5-foot-9 Walker. That player was Missy Ward who was 5-foot-8.

“I just do what I do best,” Walker said laughingly. “That’s one of my assets, rebounding. On both ends of the floor, so I tried to keep that going throughout my career here.”

But just like her coach who fought his way through three consecutive nine-win seasons and subsequent one-year contracts to turn the program into a winner, Walker has fought to make herself a better player.

Turn the page to her freshman season and Walker was rarely a threat to take a mid-range jumper. Even last season the sight of her pulling up may have brought groans from the crowd, but this year has been different.

Walker turned in a career-high 21 points against UMass and unveiled a lethal mid-range jumper that helped bump her scoring average in Atlantic 10 play from 6.4 last season to 10.7 points per game this year.

“She scored the ball in high school, but struggled on how to carry that over,” Crowley said of his senior starter. “But she kept working to improve. She probably could have scored more the past few years, but she didn’t need to. She needed to play defense, grab rebounds and keep others involved.”

Walker did whatever was needed for the good of the team and Crowley said her battle with mononucleosis was what derailed Bona from qualifying for the A-10 Tournament to defend their crown.

“I still think this year is a heck of a lot different if mono doesn’t grab her halfway through our conference season,” Crowley said. “She’d come off her 21-point game against UMass, finding her rhythm and we were finding ours with her.”

While Bona never was able to find their groove and qualify for the A-10 Tournament, one can not discredit the impact Walker had on the program. She never relented no matter the score, no matter the record and did whatever was needed to win.

They say the team normally represents the attitude of the coach, but perhaps this time the coach represented the player.

Walker’s Determination Leaves Lasting Legacy With The Bonnies added by Ryan Lazo on March 4, 2013
View all posts by Ryan Lazo →