ROCHESTER, N.Y. — Monroe Community College basketball fans will recognize a familiar face when the ball goes up Friday night at the Southwest Regional of the 2011 NCAA  Division I Men’s Basketball Championship.

“It feels like a dream come true,” Belin said. “It was a goal to play in the NCAA tournament.”

Averaging nearly 17 points in the three post-season games the 6’6″ senior forward garnered MVP honors as the Peacocks took the Metro-Atlantic Athletic Conference and earned an automatic bid to the NCAA tournament.

“It just kicked in on Sunday when I saw the brackets,” Belin added. “We are big underdogs. Hopefully, we can ruin some brackets.”

Belin averaged 11 points and more than five rebounds for this his second season with the Peacocks. This despite coming off the bench for the last half of the season.

“He gets starter minutes,” explained St. Peter’s head coach John Dunne. “It had nothing to do with him. It helped us stay out of foul trouble. At the end of the day, it’s who finishes the game.”

Belin gives the Peacocks the luxury of being able to bring a scorer off the bench.

“It bothered him at first,” Dunne continued. “But it should bother him. He’s a competitor. He causes mismatch problems for opponents.”

Belin responded to the change of roles with a team-first mentality  scoring in double figures for the last 13 games – a stretch in which he is averaging better than 13 points and five rebounds.

“The will to win,” Belin said is what drives him. “My senior year is extra motivation to keep on playing basketball.” 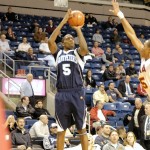 Belin has scored in double figures 26 times including five games of 20 or more points since joining the Peacocks last year. He has led St. Peter’s in scoring on 14 occasions and in rebounding 10 times.

“When his shot selection is right, he gets open looks on the perimeter,” Dunne noted. “And he gets to the foul line when drives to the basket.”

Belin helped the 2008-2009 Tribunes to a 30-7 record along with Region III and District II championships and a berth in the NJCAA Division II National Tournament where MCC finished sixth.

Belin is the second Tribune in the 20-year tenure of MCC head coach Jerry Burns to go on and play in the NCAA tournament.

“I’m elated for Jeron,” Burns said. “That’s what the experience is about. He’s playing where he every kid wants to be.”

“Jeron always had a good understanding of what was expected on the court and in the classroom.”

Belin spoke of the encouragement he received from Burns.

“He stays on you when he believes in you. He gets you to be the player you were meant to be.”

Belin joins former Trib Gerry Crosby who also got a chance in “The Dance.”

Crosby played with the Monmouth Hawks team that lost in the first round of the 2001 tournament to eventual champion Duke.

Friday’s game is scheduled for 7:20 tipoff and will be telecast on TNT.

Dunne said of his team’s outlook: “If Jeron does what he’s been doing, and we all do what we’ve been doing, I think we got a chance to surprise some people.”