It started innocently with the realization that the end of exams for the fall semester at Xavier coincided with the Musketeers hosting Wake Forest. Muskies and Demon Deacons. A10 and ACC. Gee, that almost falls under the category of obligation. After all, I couldn’t exactly call myself a fan if I was actually in Cincinnati on the same weekend as the second annual Skip Prosser Classic, and  did not attend the contest.

I etched it on the calendar.

Not too long after scoring the tickets for WF-XU, I noticed St. Bonaventure scheduled a tilt versus Virginia Tech at Rochester’s “Big House” – The Blue Cross Arena. ACC-A10 in Rochester. Yeah, I didn’t have much choice. Then, I stumbled onto the University at Buffalo ledger and saw that BYU would visit Western New York. That meant a chance to see national player-of-the-year candidate, Jimmer Fredette.

A pair of Xs marked the calendar.

The better two-thirds (as opposed to the better-half) had been requesting that we attend an NBA game. Life is good. Far be it from me to keep her from what she wants. Right? Cleveland on the 26th of December is a great way to keep the holiday spirit.

Work in there my gig with Canisius on the 29th and a Premier Basketball League game New Year’s Eve, and the holiday season offered a buffet of hoops. When it was all done, 12 teams from six conferences and two professional leagues, played six games in five venues of four cities.

We lighted out for Cincinnati on the 17th. Stopped at Main Street, Buffalo to pick up daughter #2 on our way to pick up daughter number one (she is enjoying that designation). Daughters in tow, the holiday season officially started. The game on the 18th at Cintas would be my third on the Xavier campus. I considered getting down on all fours and crawling from the daughter’s apartment, but, eh, the better two-thirds might have disowned me. But if I wanted to, I could because the basketball gymnasium sits in the middle of campus. Xavier’s cafeteria is part of the Cintas Center. That’s the way it should be.

David West paid a visit as the Muskie alum was inducted into the Xavier athletic hall-of-fame. Tu Holloway welcomed West notching the first triple-double at home since the former POY turned the trick almost ten years previous. I’m not sure I have been on hand for a triple-double. I know I have seen the feat on television, but seeing it in person made the trip all the more special.

Couldn’t help but notice the out-of-town scoreboard throughout the game. The Bonnies were in a four-overtime classic with Ohio University.

The buffet was off to a great start.

Five days and 500 miles later we made our way to the corner of Exchange and Broad for the Hokies and the Bonnies. Props to Tom Flaherty of Flaherty Funding.  The St. Bonaventure alum played a significant role getting his alma mater to give up a home game and come to Rochester. The Bonnies made an exciting second-half comeback. Va Tech’s 1-3-1 puzzled St. Bona for the first half. The Bonnies split the top defender in latter stanza and erased a 13-point half-time deficit to send the game into overtime. Ogo Adegboye brought 5000+ to their feet when he nailed a deep trifecta. Ultimately, the four overtimes came back to haunt the Bonnies. St. Bonaventure star, Andrew Nicholson played every second of the 60 minute marathon on Saturday . Nicholson spent time on the bench during the second half and overtime trying to work out leg cramps.

Malcolm Delaney scored 19 and Jeff Allen added 18 as the Hokies trimmed the Bonnies 76-68.

The game was Bonaventure’s second in as many years at Rochester’s “Big House” and sixth in the last decade. The Blue Cross has hosted games between SBU and St. John’s, West Virginia, Syracuse, St. Louis and Charlotte. Here’s hoping the trend continues. A double-header would be nice. Can you hear me Coach Boeheim? Canisius? Niagara? UB? 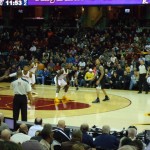 Special thanks go out to the gentlemen of Huron Road outside Quicken Loans Arena. Their Christmas spirit allowed the family to acquire Cavs-Timberwolves tickets at…ohhhh 45 percent of face value. How else could a teacher afford two half-court tickets 10 rows from the court and another pair four rows up in the corner? Haggle with me! 🙂   “Dawg you gonna be right there when LeBron throws the **** in the air.” Me: “Yeah,well LeBron is not going to throw anything here tonight. He’s probably still in LA.” Got a couple of laughs and trimmed a cool buck fifty off the total right there. Walking away helps too – especially about 30 minutes prior to game.

In all honesty, the wife wanted to go to a Celtics’ game. My tact was to get her as close to the court as possible. And there is NO WAY I was getting anything below the third deck in Boston.

There are times in the house when the Association is frowned upon. Sitting close gives a different perspective. One can’t understand the speed of basketball by watching it on television.

The Cavs held Kevin Love without a field goal for the first 40 minutes. Antawn Jamison and Anderson Varejao gave a defensive effort worthy of comparison to AC Green (I’m not sure I everthought I would compare Jamison to Green). Then Love got a rebound and putback, a pair of treys as the Timberwolves edged the Cavs in the final seconds 98-97.

I couldn’t help but notice three Tar Heels getting plenty of run: Jamison, Wayne Ellington and Jawad Williams – three of 13 current UNC alums in the NBA. Cleveland and Minnesota are a combined 16 and 49. Any coincidence? 🙂

More thanks to the usher in the family section of the visiting team. He overlooked our lack of a player pass and allowed us to hang out for a bit. Love that Christmas spirit.

Great to see the Golden Griffins get back to their winning ways. Alshwan Hymes earned early POTW recognition as the Griffs downed Northwestern State 85-52. Travel problems earlier in the month plagued the team. An early winter storm created a series of delays and missed connections as the Griffs traveled to South Dakota. They beat the Coyotes, but   “travel” lag set in four nights later as a slow Canisius club lost to St. Francis.

Made my way back to the Buffalo the next night for an opportunity to see the UB Bulls take on the BYU Cougars. BYU won, but UB staked their claim to being a legitimate contender for a bid to the NCAA Tournament. Byron Mulkey gave Jimmer Fredette everything the All-American could handle.   At one point in the second half, Mulkey scored eight straight and dished out an assist after taking Fredette off the dribble. BYU’s Dave Rose called a timeout and Fredette was covering Dave Barnett on the next possession.

Fredette finished with 34. Obviously, his outside shooting is impressive. But his body control going to the basket makes him a POY candidate. Fredette shifts to another gear with his last step before the basket. He is an adept geometrician cutting the defender off before attacking the cup.

UB’s Javon McCrea is worth seeing. The freshman from Newark, New York has a 7’2″ wing span.   He averages 8.6 ppg, 7 rpg and almost two blocks off the bench.

Many thanks to our favorite local news personality who provided ducats for the Rochester Razorsharks opener. The PBL is a great league to catch guys who don’t want to quit playing.  Players come from the prominent (Kentucky and Virginia) and not-so (Robert Morris and Tennessee-Chattanooga).  Interesting considering the recent success of Gray Neal (Towson) with the Spurs. They are worthy of admiration for their willingness to keep playing without a lot of fanfare.  Any chance to catch a game on Les Harrison Court is a good thing. Bill Pucko provides Shark Bytes.

A thought crossed my mind while watching the Razorsharks and Dayton Air Strikers. An idea I have previously shared in this column. Considering the anointed one mentioned a dirty word last week only to realize he needed a vocabulary lesson.   Shee-yah! (Here’s hoping Devin Harris, Derek Fisher and Jared Dudley don’t suffer from memory loss. Maybe those three can take a cue from Mo Williams and give the anointed one a cold shoulder). Instead of contraction, consider relegation. The NBA already has the D-League in place. The PBL has survived for a few years. Take the 30 teams of the NBA and divide them into an 18-team top league and 12-team second tier league. Then, at the end of each year, the leagues are re-shuffled based on the standing of individual teams.  Competition in the sport would increase. Interest in the sport would increase.

Great way to end the year being able to walk out of the Blue Cross arena on to Court Street and catch some fireworks. An interesting phenomenon developed. Fireworks echoing off the nearby parking garage sounded like a car on the thruway passing over the rumble strips marking an upcoming toll station.

What to do now?

Did anybody mention conference play?

“I wish I could come up with something real positive to say about my bunch, but, you know, it’s going to be hard to find a silver lining in that. My daddy says, ‘You can’t make a silk purse out of a sow’s ear.’ Y’all prolly ain’t heard that one.”

UB coach Reggie Witherspoon on BYU’s Jimmer Fredette: “He’s a bad dude. It wasn’t like anything backfired, it was like, Jimmer Fredette, first-team All-American. We were in great position, and he pulls and fires.”

Jimmer Fredette on scoring 34 after going 1-9 in the first half: “You have to have short term memory loss.”

Cecelia after having her picture taken with Wes Johnson: “We can go now.”