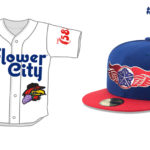 Courtesy of RedWingsBaseball.com ROCHESTER, NY – Celebrate all things Rochester with the Red Wings on Wednesday, August 8 at ROC the ROC Night presented by the City of Rochester, ESL Federal Credit Union, Castle, C.P. Ward, Airport Transmission, The Exchange, and Brickwood Grill. “We are very excited to partner with our beloved Rochester Red Wings for ROC the ROC Night,” … END_OF_DOCUMENT_TOKEN_TO_BE_REPLACED 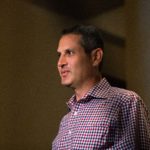 By KEVIN OKLOBZIJA It's an even-numbered year, so that means one thing for the Rochester Red Wings: Their affiliation agreement with the Minnesota Twins, the parent team since 2003, will be up for renewal. The Twins say they want to stay. Thad Levine, senior vice president and general manager since November 2016, made his first visit to Frontier Field on Tuesday to … END_OF_DOCUMENT_TOKEN_TO_BE_REPLACED

Courtesy of RedWingsBaseball.com ROCHESTER, NY – Gary Larder, Chairman of the Board for Rochester Community Baseball, Inc., has been named the recipient of the Bowie Kuhn Award presented by Baseball Chapel.  The award, presented annually at the Baseball Winter Meetings to an individual, team or organization who demonstrates support of the chapel program in professional … END_OF_DOCUMENT_TOKEN_TO_BE_REPLACED 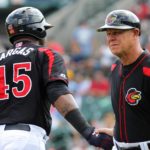 By Kevin Oklobzija After playing their first seven games of the International League season on the road, the Rochester Red Wings finally came home to Frontier Field and they were greeted by 11,343 fans on a sun-splashed Good Friday. “The crowd,” Wings manager Mike Quade said, “was phenomenal.”   Among the baseball-starved patrons at the downtown ballpark … END_OF_DOCUMENT_TOKEN_TO_BE_REPLACED

Courtesy of RochesterRedWingsBaseball.com ROCHESTER, NY – Three strikes and you’re out. Those are the rules. And despite swinging and missing each of the last two years, Rochester Red Wings General Manager Dan Mason is back again to make a bold guarantee regarding the weather for the Home Opener on Friday, April 14 at 1:35 p.m. “2017 marks the 60th season of Rochester … END_OF_DOCUMENT_TOKEN_TO_BE_REPLACED