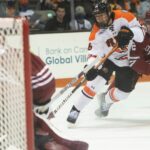 By CHUCKIE MAGGIO Wayne Wilson is confident he has the right personnel on his power play unit, evidenced by its track record. The RIT men’s hockey team tied for 11th nationally in power-play scoring last season with over one man-up goal a game. Nearly a quarter (24 percent) of the Tigers’ goals over the previous two seasons were power-play scores. Through the first six games … END_OF_DOCUMENT_TOKEN_TO_BE_REPLACED