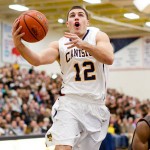 Courtesy of GoGriffs.com Former Canisius guard Billy Baron '14 has been selected as one of 16 players who will participate in the USA Basketball Men's AmeriCup Team training camp, USA Basketball announced Monday. The group of 16 players boast NBA, NBA G League and international playing experience. The training camp, which will be used to select the national team that will … END_OF_DOCUMENT_TOKEN_TO_BE_REPLACED

NBA fans will get a double dosage of game 7 action as the Spurs travel to New Orleans to play the Hornets, and the Celtics host the Cavaliers. Something’s gotta give between the Spurs and the Hornets. Either the World Champion Spurs will exit early or the Hornets will surrender at home - something that has only happened twice in the NBA’s second round. The Spurs will hope to … END_OF_DOCUMENT_TOKEN_TO_BE_REPLACED