Villanova-Syracuse: Tale Of The Tape 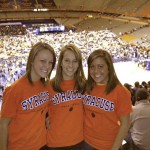 An on-campus record crowd of 34,616 is expected to file into the Carrier Dome. The university is already encouraging fans to plan ahead and arrive early. Both of Syracuse’s losses this year have come at home.

Dayton-Temple: Tale Of The Tape

How will the Owl defense respond? Temple was exposed earlier this year against Kansas. The Owls got out defended beyond the arc and fronted the post. Kansas exploited an advantage in athleticism for a big win. Temple matches up with Dayton athletically, but will the Flyers take a page from the Kansas playbook?

Speaking of UK-Vanderbilt, the final score of that tilt was 58-56. Kentucky entered play Saturday averaging 81 per game. Conference play has a way bringing teams down to size. Opponents know tendencies and have seen familiar offensive sets. It all makes for great battles.

Can The Metro-Atlantic Grab An At-Large Bid?

Recently, MAAC schools have won a game in each of the last three NCAA Tournaments. Niagara won the 2007 play-in game by defeating Florida A&M, 77-69. Since then, Siena has taken two games. The Saints downed Vanderbilt, 83-62 in the 2008 tournament. Villanova beat Siena by eight in the next round. Last year, Fran McCaffery’s squad trimmed Ohio State by two before bowing to Louisville, 79-72.

Siena-Butler: Tale Of The Tape

Both Rossiter and Howard establish position in the post that gives passing angles for teammates. Once they receive the ball, both can finish with either hand. This could be a battle of attrition with the player able to avoid foul trouble getting the better of it. Rossiter plays behind in the post allowing the opponent to receive. When the ball is in flight, Rossiter steps back and leaves contact forcing the opponent into a jump shot that he defends well. Howard will struggle against the taller Rossiter.

Still, Pitino and Louisville forged ahead. The 15-9 Cardinals took 30 three pointers (Louisville took 56 total shots for the game) against the Orange. They only made nine of those attempts (30 percent), but Louisville knocked off the No. 2 Orange, 66-60 at the Carrier Dome.