ROCHESTER, N.Y. — A pair of starters turned in their longest personal outings to date, and the Monroe Community College baseball team avenged a weekend sweep.

Barron struck out three without surrendering a walk to seal a sweep with the game-two win. The left-hander worked through four shutout frames before running into trouble in the fifth.

“He throws a lot of strikes and he is such a competitor,” MCC head coach Dave Brust said. “He controls the running game, and he’s an outstanding athlete.”

After surrendering a leadoff double to start the game, Barron retired seven of the next eight batters he faced. He worked out of a jam in the third when Scottie O’Bryan reached on a two-out error, and Chris Tani followed with a bloop double into shallow center field. Barron induced a routine fly ball to end the threat.

O’Bryan and Tani touched Barron for back-to-back, one-out RBI doubles in the fifth to get Niagara on the scoreboard, but Barron left Tani at second with a ground ball and a strike out.

“He was more than ready for this,” Brust said of Barron whose longest outing prior to Tuesday was three innings on March 14th. “I wanted to get him through this, so maybe the next time we can bump it a click more.”

Monroe scored all if its runs in the first inning when Trey Brown (Rochester, N.Y./Aquinas), Ryan Hill (Webster, N.Y./Webster Thomas) and Justin Herrera (Stratford, CT/Bunnell) drove in a run apiece.

Ben Beauchamp (Rochester, N.Y./McQuaid Jesuit) sparked the inning with a leadoff walk. Patrick May (Baldwinsville, N.Y./Baldwinsville) doubled, and Brown followed with a run-scoring single. One out later, May came home on a wild pitch.

Trey Brown plates Ben Beauchamp to get the scoring in the bottom of the first. No outs, runners on the corners. pic.twitter.com/Yd4vwEfwXy

Hill plated Brown with a base hit and later scored on a Herrera single.

Ryan Hill brings in the third run of the first with a 2-out single. pic.twitter.com/Y7HsETrZP5

Ethan Putney (Churchville, N.Y./Churchville-Chili) worked a pair of scoreless innings in relief. The right-hander set down six of the seven batters he faced with two strike outs and a walk.

Ethan Putney gets the final out on strikes. Right-hander retired 6 of the 7 he faced. @TribuneBaseball takes game 2, 4-2 for the sweep. pic.twitter.com/62OHKKbbjn

Wesseling struck out four and walked four over six-and-a-third to pick up the win in game one. The right-hander retired seven of the first eight he faced.

He worked around a one-out single in the fourth before running into trouble in the fifth when O’Bryan highlighted a three-run frame with a two-run double.

Wesseling tossed a scoreless sixth before leaving the game with two on and one out in the seventh.

“Hayden Wesseling has clearly solidified his place as our third starter,” Brust said. “For a first-year player who didn’t have a fall season (because of COVID precautions), he is really showing poise, command and the ability to throw strikes with two and sometimes three pitches. His maturity on the mound is really impressive.”

Griffin Dietrich (Buffalo, N.Y./Orchard Park) came out of the bullpen retired the only two batters he faced.

Beauchamp went 1-for-3 and drove in a pair of runs.

May scored a run and drove in another.

Hill finished 3-for-5 on the day with a walk and two runs scored. 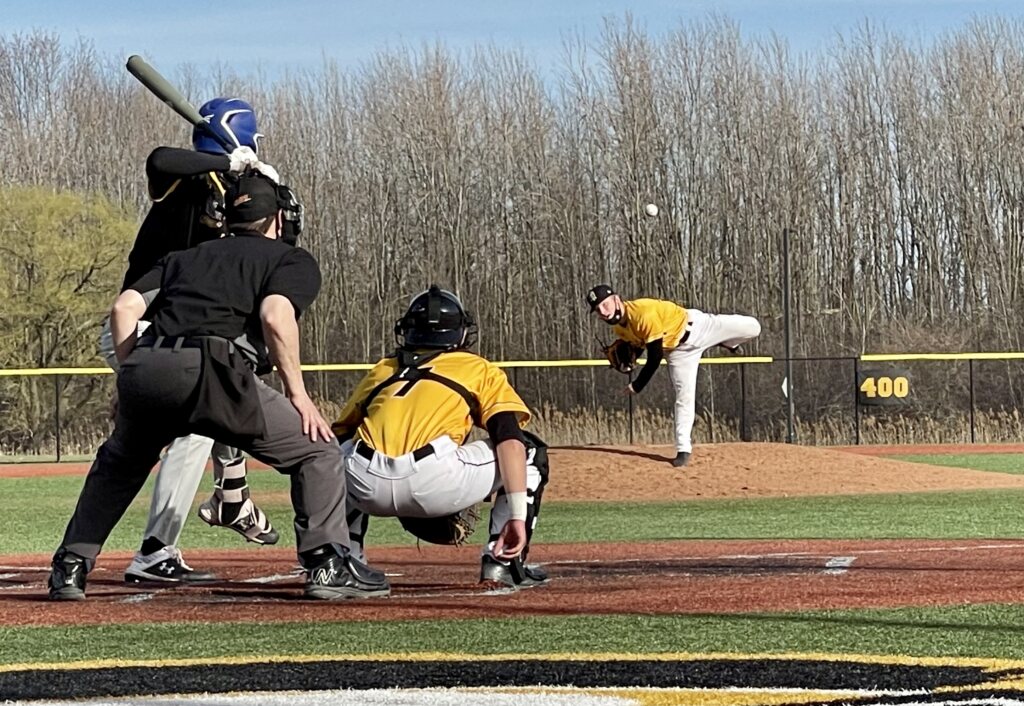 Monroe (8-4) is scheduled to host Finger Lakes CC on Friday.