Connor Williams, Adam Williams, Jackson Kulik, Jacob Shadders and Zach Gilebarto all received top honors in their respective Monroe County divisions for the 2021 season. Connor and Adam Williams met in the Class AA championship game, with Adam Williams’s Gates-Chili taking home the title. Kulik’s Webster Thomas team was the No. 2 seed in the Class A1 tournament, but fell short in the semifinals. Shadders, a Charleston Southern commit, led Pittsford Mendon to its second sectional title in three seasons. Gilebarto was Batavia’s leader through an unbeaten regular season.

Four of the five award winners are seniors, with Kulik being the lone junior.

Connor Williams, the Monroe County Division I co-Player of the Year, led Victor in scoring and rebounding with 15.9 PPG and 8.2 RPG. The seven-footer also dished out four assists per game and shot 47 percent (17-for-36) from deep. CJ James joined his teammate on the Monroe County Division I First-Team, averaging 12.2 points, 5.8 rebounds, 2.8 assists and 1.7 steals while shooting 60 percent from the field. Chase Dickens was the lone Blue Devil on the Division I Second-Team.

Adam Williams was the other Division I co-Player of the Year, netting 25 points and grabbing 11 boards per game, including 22 points in the Class AA championship game. The 6-foot-4 forward/guard shot 59 percent (131-of-219) from the floor including 43 percent (27-of-62) from behind the 3-point arc. Devon Payton joined his Spartan teammate on the Division I First-Team, averaging 16 points, three rebounds and three assists. Andrew Newcombe was the only Gates-Chili player named to the Second-Team.

Luke Insley and Ky’Mere Meeks rounded out the Division I First-Team from Webster Schroeder. Insley, who became Schroeder’s all-time program scoring leader this season, averaged 17.5 points and 4.4 assists per game. Meeks scored 16.8 points and grabbed 9.3 rebounds. Meeks connected on 58.2 percent from the floor for the season.

Kulik nearly averaged a double-double en route to winning the Monroe County Division II Player of the Year award. The junior went for 23 points and 9.5 rebounds per game, which included five double-doubles. Kulik shot 52 percent from the field, breaking down to 64.3 percent on two point shots and 33.8 percent on threes. Tyler Williams was also a Division II First-Team performer for the Titans, finishing with 10.7 points, 3.7 assists and 1.7 steals per game on 46 percent shooting from the floor. Shawn Mason received a Second-Team nomination, the only player from Webster Thomas to get that honor.

Keenan Robertson and Ryan Heath were named to the Division II First-Team and Second-Team, respectively. Robertson scored 19.2 points, ripped down 8.4 boards and dished out 2.7 assists per game. The 6-foot-4 senior had a slash line of 56 percent from the floor/38.2 percent/70 percent from the free throw line.

Patrick Uebelacker (Spencerport), Jason Gibbs (Churchville-Chili) and RJ Wilkins (Penfield) rounded out the Division II First-Team. Uebelacker averaged a double-double for the Rangers, tallying 18.8 points and 11.7 rebounds per game. He had seven double-doubles in 10 games, including a 29-point, 15-rebound game against Churchville-Chili. The senior also shot 58.6 percent on twos in his final season. Gibbs was a stat-sheet stuffer for the Saints, scoring 18.6 points, grabbing five rebounds, dealing four assists and nabbing two steals per game. Just a sophomore, Gibbs scored 28 points to go with seven assists and six steals against Penfield. Additionally, he scored 29 points, ripped down 12 boards and had four assists and two steals against Irondequoit.

Shadders won his second consecutive Division III Player of the Year honor behind 20.1 points, 7.8 rebounds, 7.0 assists and 2.0 steals per game along with five double-doubles. The 6-foot-2 guard shot 66 percent on twos, 38 percent on threes and 86 percent from the free throw line. Jackson Green joined his Pittsford Mendon teammate on the Division III First-Team. The sophomore averaged 15 points, six rebounds, 5.1 assists and 2.8 steals per game. He had three double-doubles and made 60 percent of his twos, 32.4 percent of his threes and 81 percent of his foul shots. Luke Hoyser was the third Viking honored, as he was named to the Second-Team.

Kenny Freeman and Austin Brown were both Division III First-Team members from Greece Athena. Freeman led the Trojans in scoring with 17 points to go with his 7.0 rebounds per game. He came up clutch for Greece Athena, scoring all nine of his team’s overtime points in a win over Canandaigua and making the game-winning free throw in the Trojans’ sectional win over Geneva. Brown was the leading rebounder, grabbing nine per game and averaging 15 points. The senior forward had a 23-point, 23-rebound game against Greece Arcadia.

Gilebarto averaged 23 points on 62 percent shooting from the field, 41.5 percent from three and 94 percent from the free throw line to win the Division IV Player of the Year award. The 5-foot-11 senior also grabbed seven rebounds and had four assists per game for Batavia. Stone Siverling joined Gilebarto on the First-Team by scoring 18 PPG, ripping down 8.0 rebounds, dishing out 3.0 assists and blocking two shots per game. Siverling shot 58 percent from the field and notched four double-doubles. Alex Hale was named to the Division IV Second-Team. He scored 10.4 PPG on 51 percent shooting. 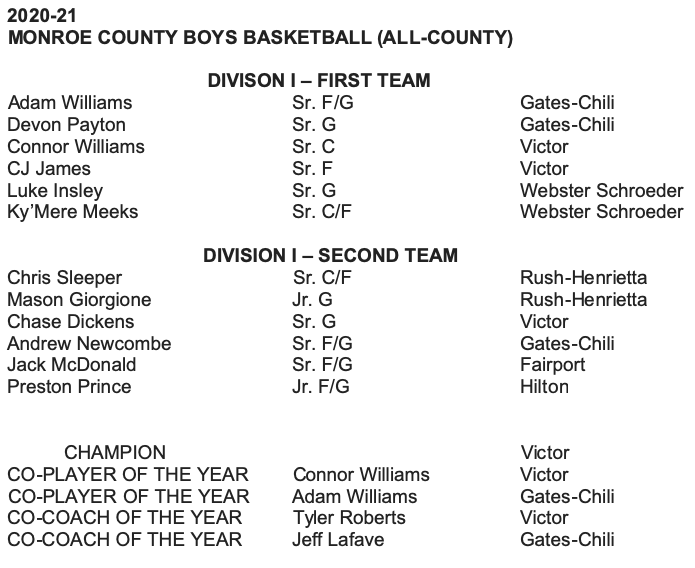 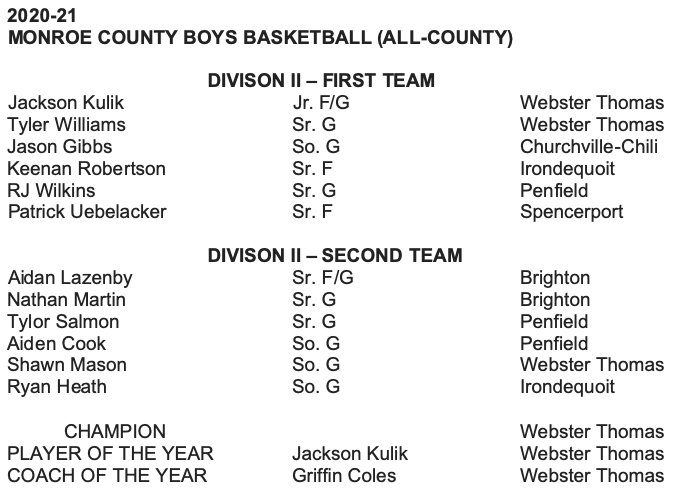 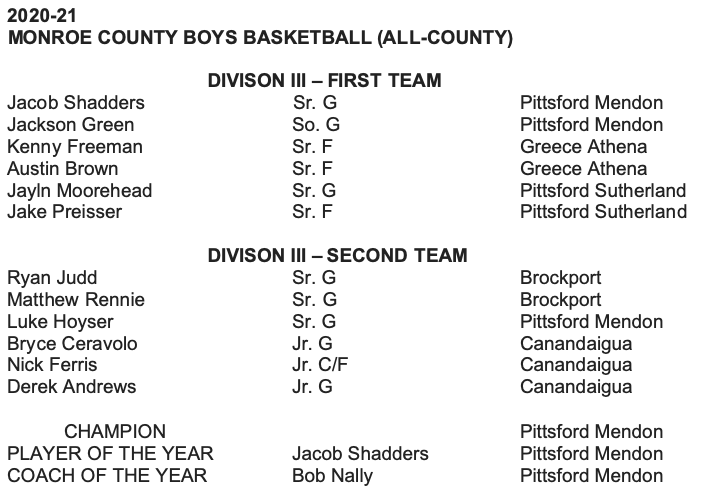 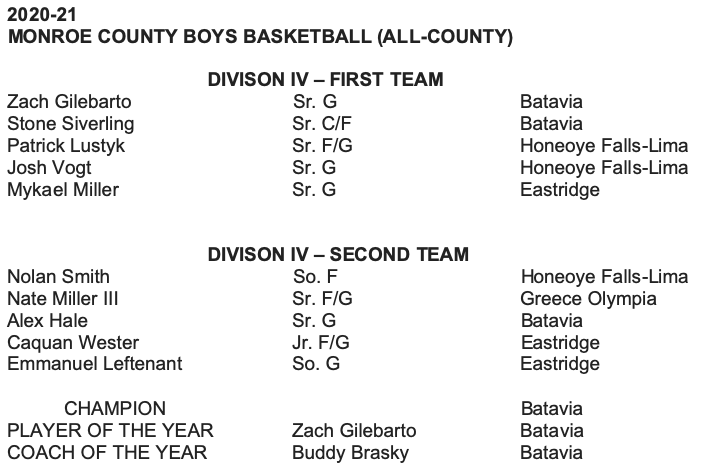