Private-Parochial announces 2020 Athletes of the Year

The Private-Parochial League honored 23 student-athletes from 11 schools during the 17th annual Athletes of the Year Luncheon. Athletic directors from the league started the function in 2004 with the purpose of honoring senior athletes and rewarding them for their commitment to athletics.

“On behalf of all the athletic directors, congratulations to all the senior athletes for the success you have endured over your careers, best wishes for your futures and we hope you enjoy the luncheon,” Private-Parochial League president and Bishop Kearney Director of Operations Chris Belmont said.

The 2020 Private-Parochial Athletes of the Year included:

Annechino played soccer, softball and boxing. In soccer, she was a four-year varsity starter as a goalie and led the Lady L’il Irish to the 2017 NYS Class B title. Annechino was a five-year varsity starter on the softball team and boxed for two years as well. She plans to attend Saint John Fisher College and pursue a career in Nursing.

DeBonis and Giannini were teammates on the football and track team. DeBonis was a four-year varsity starter and team captain in football. The University of Rochester commit was named the 2018 NYS Class AA Final Most Valuable Player and the recipient of the 2020 Black Lion Award, given to a football player not for his athletic abilities or accomplishments, but for his upstanding character. DeBonis qualified for sectionals in Track and Field in 2018 and participated on the lacrosse team as well.

Giannini was team captain in track and field and participated in High Jump, Pole Vault and Triple Jump. He won the Section V Class C championship in all three events and placed 18th in the Pole Vault state championship. Giannini plans to attend Ohio State University and study Mechanical Engineering along with become a Decathlete.

Phelan and Russotti were teammates on the volleyball and softball team. Russotti and Wellman were teammates on the track team. In volleyball, Phelan and Russotti led the Lady Kings to the 2016 and 2018 Class D sectional title. In softball, Phelan was a six-year varsity starter (two years at Greece Olympia and four years at Bishop Kearney), 2017 NYS Class C Player of the Year, two-time Private-Parochial Player of the Year and two-time Section V tournament MVP. Phelan will continue her softball career at Saint Bonaventure University.

Russotti was team captain in volleyball and track. In volleyball, she was named the 2018 Section V Class D tournament MVP. Russotti will continue her athletic career at SUNY Brockport. Wellman won five sectional titles – four in track and one in basketball. She holds the school High Jump record with five feet and three inches. Wellman placed eighth in the indoor track state championships. She plans to attend the University at Buffalo and study Social Sciences.

Crandall was team captain in volleyball, basketball and softball. She was named the team MVP of the volleyball and softball team in 2019. In basketball, Crandall earned the Team Most Improved Player award for the 2017-18 season. In softball, she earned a spot on the Private-Parochial All-League team three consecutive years from 2017 to 2019. Crandall was selected to the 2019 Section V Class D1 All-Tournament team as well. She will continue her softball career at Houghton College.

McGuire and Trezise were teammates and captains of the soccer, basketball and softball team. McGuire was selected to the Private-Parochial All-League First Team in soccer and All-Tournament First Team in softball. Trezise earned a spot on the Private-Parochial All-League team in all three sports as well. Trezise plans to attend Finger Lakes Community College.

Sonoga played soccer, basketball and baseball. His best sport was soccer where he was a four-year varsity starter, team captain for two seasons and selected to the Private-Parochial All-League team. Sonoga plans to attend Finger Lakes Community College and study Music Recording Technology.

Both were track athletes and ran cross country, indoor and outdoor track. Guy was the team captain in all three sports and set seven school records. Guy won the Private-Parochial League Long Jump championship as well. He will continue his track career at Wingate University.

Judith Lanahan and Emily Tabone from Our Lady of Mercy

Lanahan and Tabone were teammates and captains of the soccer team. Lanahan was selected to the Private-Parochial All-League Team and named Player of the Year this past season. She ran indoor and outdoor track as well and holds the school record in the 600-meter relay, the Pentathlon and 4 x 800 meter relay. Lanahan will continue her track career at the University of Notre Dame.

Tabone played basketball as well where she was named team captain this past season. She earned back-to-back team MVP awards and scored over 1,000 career points. Tabone will continue her basketball career at Saint John Fisher College.

Martinez played volleyball, basketball and track. She was team captain in volleyball. Martinez is deciding between attending the University of Rochester and enrolling in the United States Army. Vazquez played soccer and basketball. He was named the Team Defensive Player of the Year for soccer. Vazquez plans to attend the Rochester Institute of Technology and study engineering.

Cathey and Quinn were teammates on the track team and won the Class B sectional championship. Cathey won the Jack Reed Showcase in 55-meter dash. He holds the Section V record for the top 14 fastest times recorded in the 55-meter dash as well. Cathey’s speed translated to the football field where he recorded 1,101 all-purpose yards as a tailback. He will continue his football career at SUNY Cortland. Quinn earned All-League honors in Long Jump and will continue his track career at either Buffalo State, Alfred State or Tiffin University.

Harris played soccer and basketball. He was the senior captain and Team Defensive MVP in soccer and the Most Improved Player in basketball. Harris plans to attend Monroe Community College and study Criminal Justice.

Prather was the team captain in volleyball, cheerleading and softball. She was a two-year varsity starter on the volleyball and softball team and four-year varsity cheerleader. Prather plans to study Psychology at either Mercyhurst College or Morgan State University. 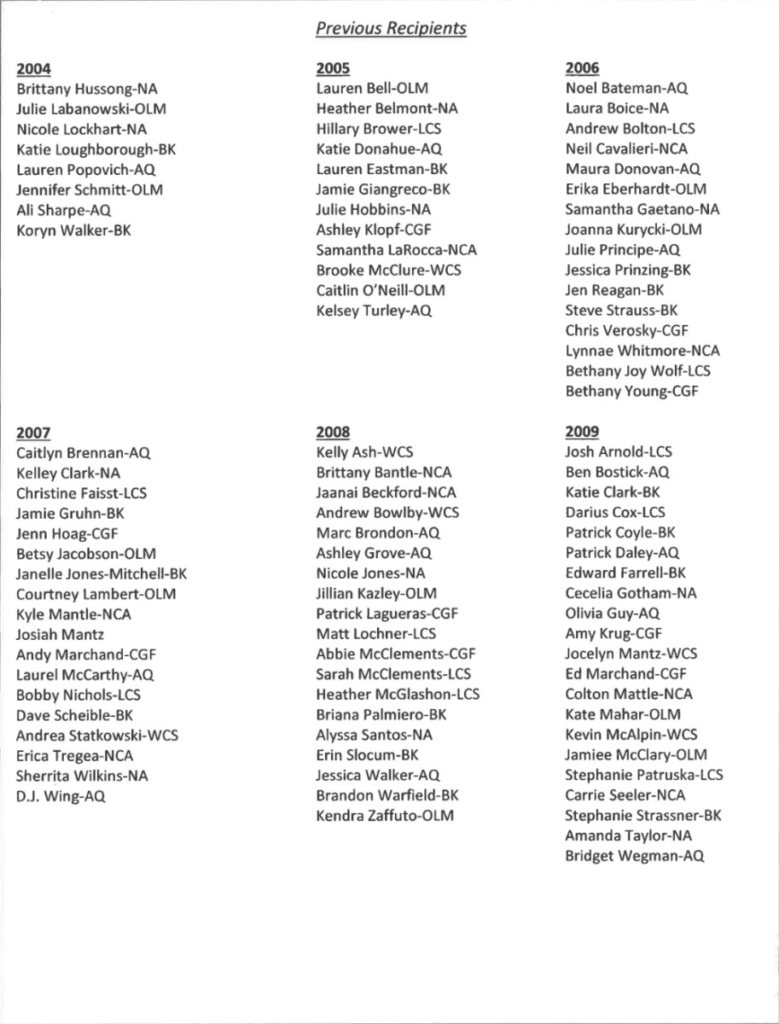 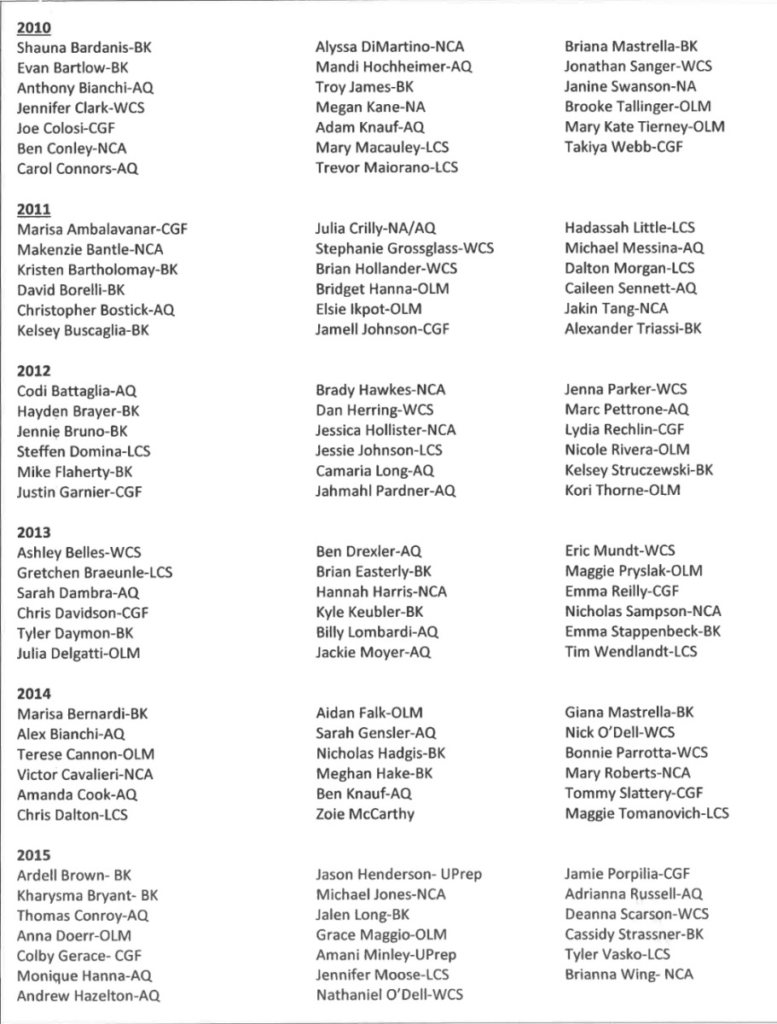 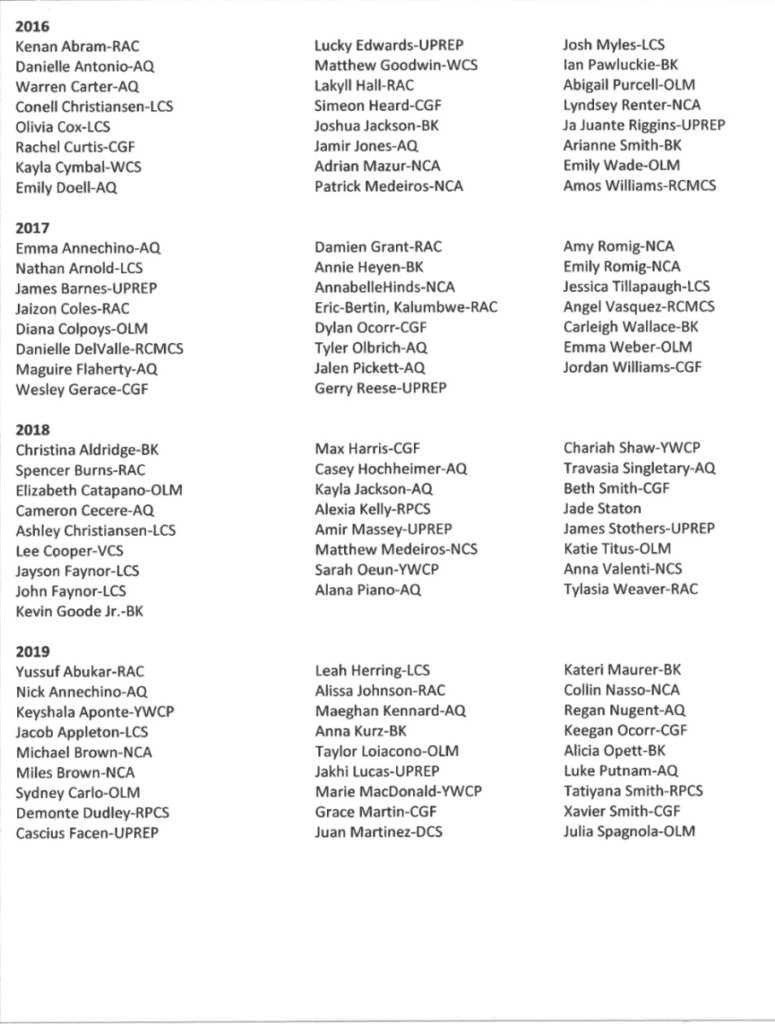