Aaliyah Pennie and Saniaa Wilson both led their respective squads in scoring and averaged a double-double apiece. Pennie sparked Northstar Christian to the No. 2 seed in sectionals. Wilson lifted the Lady Kings to their third straight sectional title.

The senior forward and junior center were named the Players of the Year as announced by the Private/Parochial League.

Wilson averaged 15.6 points, 16.0 boards, 4.6 blocks, 3.8 assists and 1.7 steals to earn Division I honors. The junior center tallied 18 double-doubles this season, her best performance coming on January 25th in a 75-73 win over St. Mary’s (VI) in which she had 34 points and 17 rebounds. Wilson, who has received scholarship offers from Syracuse, Georgetown, West Virginia, Florida, Clemson, St. Bonaventure, Canisius, Buffalo and Old Dominion among others, paced a Lady Kings squad who averaged 61.5 points and held opponents to 47.9 en route to a 20-3 record.

Chanel Alexander rounded out the Division I First Team for Aquinas. The junior guard netted 23.0 points, swiped 3.6 steals and collected 3.2 rebounds per game. Alexander paced an Aquinas squad which finished with a 17-5 record as well.

Karli Harnischfeger and Caroline Murphy made the Division I Second Team for Our Lady of Mercy. Harnischfeger chipped in 7.4 points per game while Murphy added 5.6.

Julie Sonricker rounded out the Division I Second Team for Aquinas. The junior guard averaged 8.7 points, 1.6 rebounds and 1.6 steals.

Pennie led the Lady Knights with 13.0 points, 14.7 boards, 2.4 blocks and 1.6 steals to earn Division II Player of the Year honors. The senior forward notched 13 double-doubles, her best performance coming on January 16th in a 55-37 win over Rochester Prep in which she had 22 points and 12 rebounds. Pennie paced a Northstar squad which averaged 50.1 points and held opponents to 33.1 en route to an 18-3 record.

Majesty Levert and Crystal Rosado made the Division II First Team for Eugenio Maria. Levert led the Lady Hornets with a double-double of 16.0 points and 12.5 boards. The senior center swiped 1.9 steals as well. Rosado averaged 12.9 points, 5.8 rebounds and 2.4 steals per game.

Rebecca Tillapaugh and Megan Trezise made the Division II Second Team for Lima Christian. Trezise led the Lady Saints in scoring with 12.1 points per game while Tillapaugh chipped in 8.6. 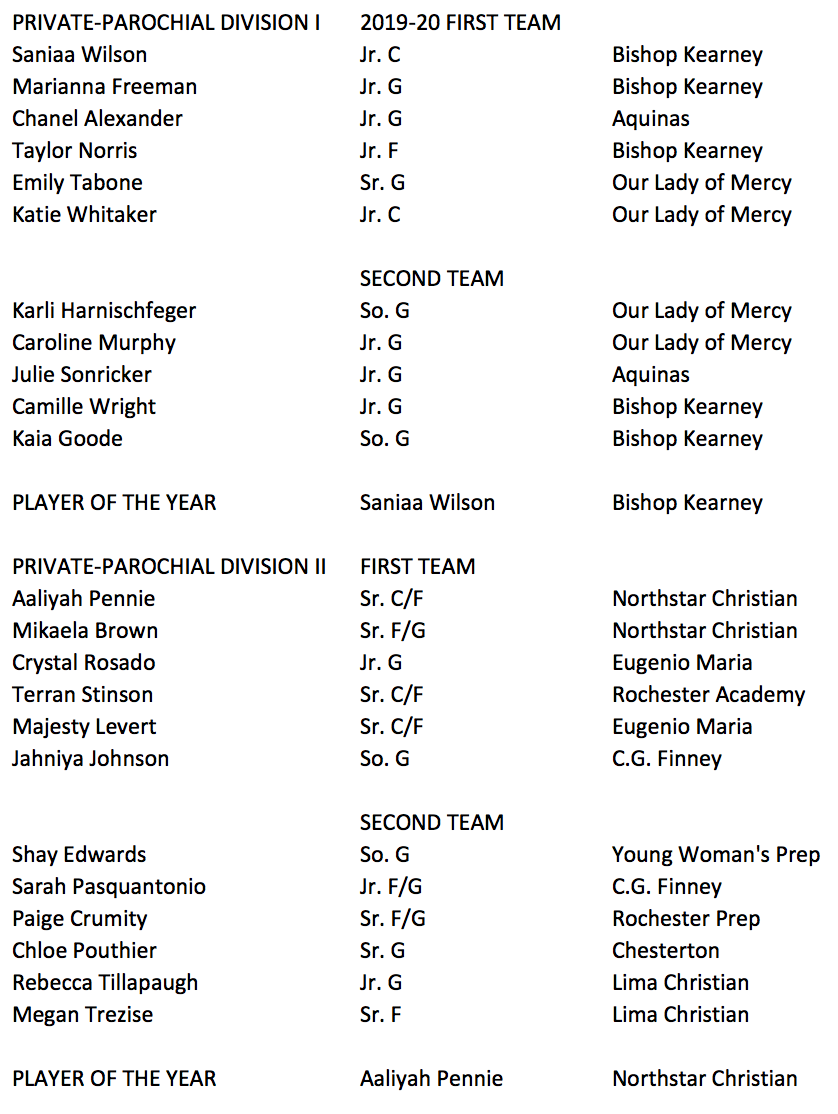