Lexi Green, Alahna Paige and Nyara Simmons each led their respective squads in scoring. Mackenzie Reigle and Baylee Teal were second on their teams in points as well.

The three seniors and two juniors were named the Players of the Year for their respective divisions as announced by Monroe County coaches.

Simmons and Teal combined for 28.4 points per game to share Division I co-Player of the Year honors for Penfield. Simmons led the Patriots with 17.1 points. The senior forward scored 15 or more points in 18 games, including a season-high 25 on January 18th in a 65-39 win over Our Lady of Mercy. Teal returned from an ACL injury with 11.3 points in 15 games played. The Fordham University commit scored the 1,000th point of her career in the first game after returning from injury.

Ella Meabon (Fairport) and Chloe Wittier (Victor) rounded out the Division I First Team. Meabon paced the Red Raiders with 12.4 points per game as a freshman. Wittier led the Blue Devils in scoring at 12.0 points.

Division II Player of the Year, Paige, was Section V’s leading scorer this season at 28.6 points per game. The senior guard netted 658 points in 23 games played and scored a season-high 50 on January 31st in an 81-74 victory over Gates-Chili. Paige added 4.1 rebounds, 3.5 assists and 2.1 steals as well. The 5-foot-5 guard will continue her basketball career at Daemen College.

Canandaigua’s Abbey Herod rounded out the list for the Division II First Team. The sophomore guard netted 7.9 points per game.

Churchville-Chili’s Jade Distant and Sydney Postell made the Division II Second Team. Postell led the Saints with 10.3 points per game and Distant was second at 9.6.

Green scored 19.7 points per game and led Pittsford Mendon to its fourth straight sectional title en route to Division III Player of the Year. The junior guard scored 15 or more points in 22 games, including a season-high 35 in an 81-43 sectional quarterfinal win over Honeoye Falls-Lima. She also reached the 1,000-point plateau this season.

Gisela Allen (Brockport) and Jenna Ortiz (Eastridge) rounded out the list for the Division III Second Team. Ortiz led the Lancers in scoring at 12.7 points along with 3.1 rebounds and 2.3 assists. Allen averaged 10.5 points, 7.4 boards, 1.9 assists and 1.9 steals.

Reigle averaged 14.4 points, 6.6 assists, 5.9 boards and 4.6 steals to win Division IV Player of the Year for Batavia. The junior guard scored double-digits in 17 games, including a season-high 23 on January 17th in a 59-57 victory over Pittsford Sutherland.

Pittsford Sutherland’s Ellie Bergin rounded out the list for the Division IV First Team. The freshman guard led the Knights with 15.6 points and 8.3 rebounds.

Justin Laureano (Brockport), Rachel Leonard (Gates-Chili), Jeff Jung (Greece Olympia), Scott Smith (Irondequoit) and Mark Vogt (Penfield) earned Coach of the Year honors. Vogt led the Patriots to a division title, their fourth sectional final appearance in five years and a 20-3 record. Leonard and Smith combined for 37 wins to share Division II Coach of the Year honors. Leonard coached the Eagles to a sectional final appearance as well. Laureano and the Blue Devils won their first six games of the season en route to an 8-3 division record and 15-7 mark overall. Jung propelled the Spartans on a six-game win streak after starting the season 3-6. 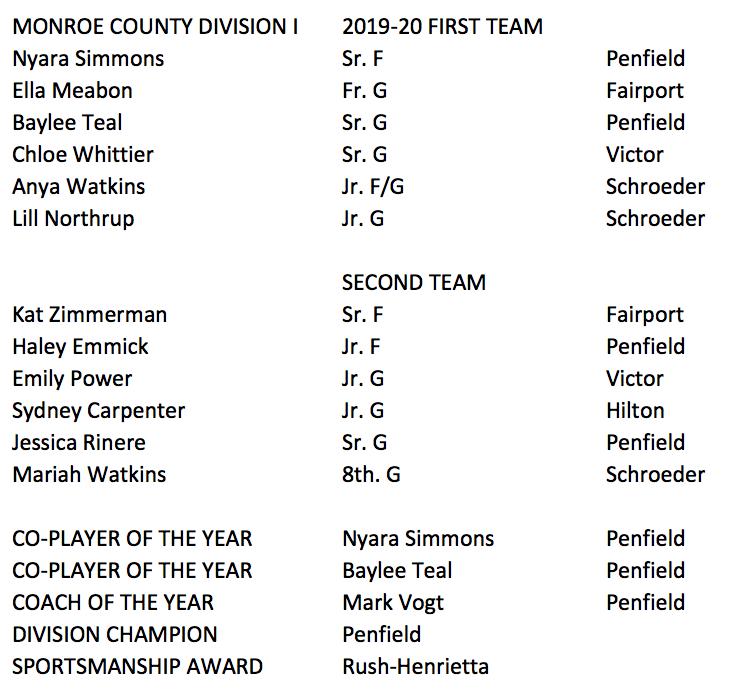 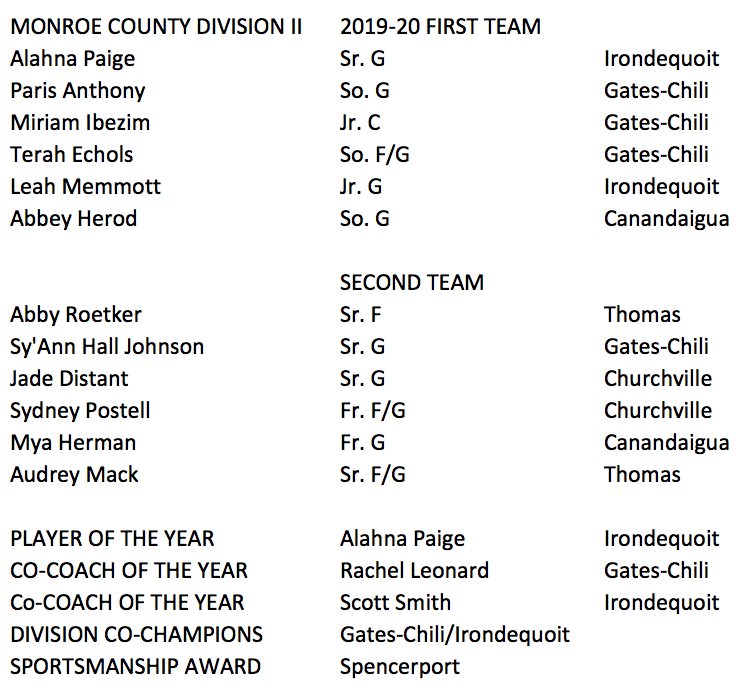 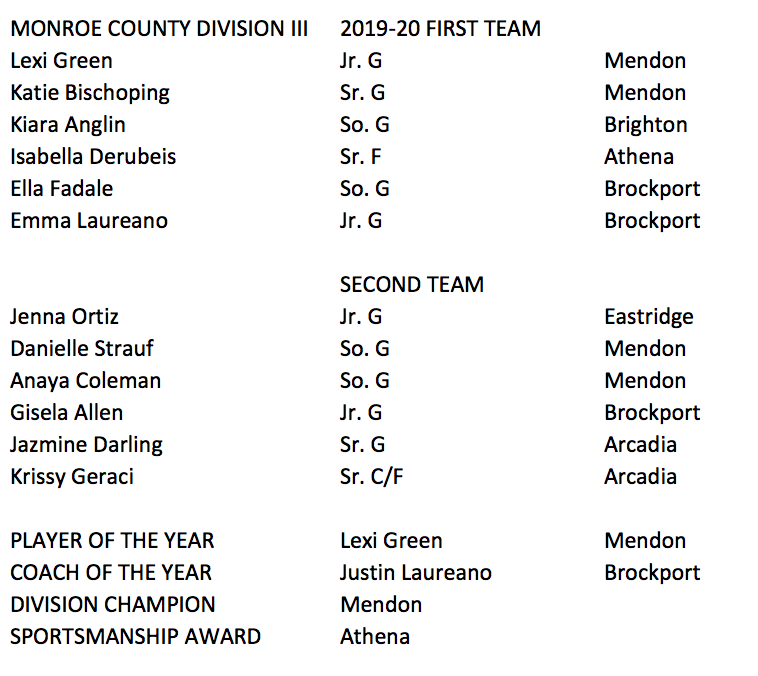 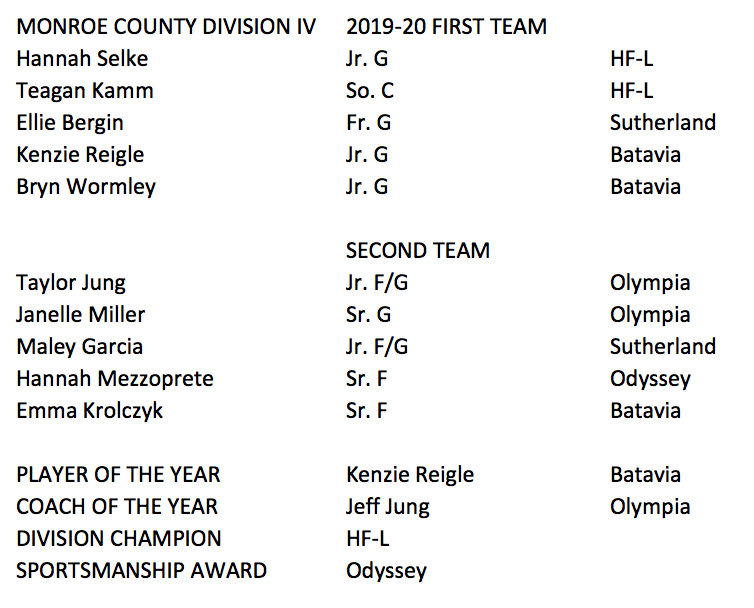