Maurice McKinney finished second in the RCAC Upper Division in scoring while sparking Leadership Academy to a league title and the No. 2 seed in sectionals.

Zechariah Harris-Scott finished third in the RCAC Lower Division in scoring while leading East High to a league title and the top seed in sectionals.

The junior guard and senior forward were named Player of the Year for their respective divisions as announced by the Rochester City Athletic Conference (RCAC).

McKinney averaged 21.8 points per game to earn 2020 Upper Division honors. The junior guard netted 20 or more points in 15 games this season, including a season-high 33 on December 10th in a 105-95 victory over McQuaid. McKinney tallied nine regular-season double-doubles, two of which registered as triple-doubles. The 6-foot-0 guard paced a Leadership squad which was second in the RCAC in scoring at 80.6 points per game.

McQuaid’s two leading scorers, Kobe Long and Jermaine Taggart, were named on the Upper Division First Team as well. Long led the division in scoring at 24.0 points per game while Taggart was third at 21.3. Long completed his four-year varsity career with 1,660 points. Taggart poured in 1,446 points in three seasons.

Edison Tech’s Shaheem Ellis, Jr. rounded out the list for the Upper Division First Team. The junior guard led the Inventors in scoring at 12.8 points per game this season and sparked a first-round sectional victory over Hilton.

Reuben Daniel and Keith Warren made the Upper Division Second Team for McQuaid. Warren averaged 11.6 points per game and Daniel scored 7.8. Wilson Magnet’s Christian Harmon and Zavarius Henry earned Second Team honors as well. Harmon finished fourth in the division in scoring at 20.9 points per game while Henry chipped in 10.5.

Edison Tech’s Torrean Lewis and Franklin’s Tahjir King rounded out the list for the Upper Division Second Team. King led the Quakers in scoring at 16.6 points per game. Lewis was second on the Inventors in points at 11.0.

Harris-Scott netted 22.8 points, tallied 18 regular-season double-doubles and has a double-double in each postseason game thus far to earn Lower Division Player of the Year. This is the second straight year the award has gone to an East High player after Chaz Washington won it last season. Harris-Scott finished third in the division in scoring and poured in 20 or more points in 17 games, including a season-high 34 on January 18th in an 82-80 overtime victory over the Park School (VI). The senior forward has 1,131 career varsity points.

Adonis Flagler and Lamar Lovelace made the the Lower Division First Team for NE Douglass. Flagler led the division in scoring at 25.8 points per game and completed his three-year varsity career with 1,189 points. Lovelace netted 21.3 points in 10 games after sitting out the first half of the season with an injury.

School of the Arts guard Ethain Clarke DeSouza rounded out the list for Lower Division First Team. The junior guard finished second in the division in scoring at 23.1 points per game and netted 20 or more points in 14 games, including a season-high 37 on December 27th in a 108-59 victory over Charles G. Finney. Clarke DeSouza has 1,244 career varsity points.

Jaequon Nesmith (Early College), Jamar Williams (Monroe), Logan Hayes (School of the Arts) and Jahlil Bell (World of Inquiry) rounded out the list for the Lower Division Second Team. Hayes finished fourth in the division in scoring at 17.6 points per game. Nesmith averaged 12.5 points while Williams chipped in 10.3. Bell netted 9.5 points per game.

Leadership Academy’s William Broome and East High’s Darrell Barley were named RCAC Coaches of the Year. Broome led the Lions to a 17-5 record and the No. 2 seed in Class A1 in his first season as head coach. Barley led the Eagles to their second straight 20-win season, their first sectional title in six years and the No. 4 spot in the NYSSWA Class A poll. The former East High player and Canisius College standout has won back-to-back Coach of the Year awards. 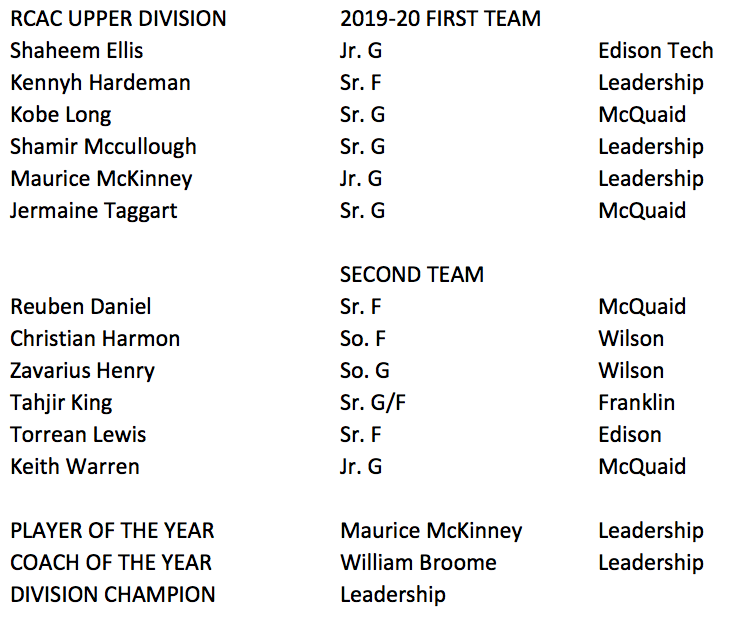 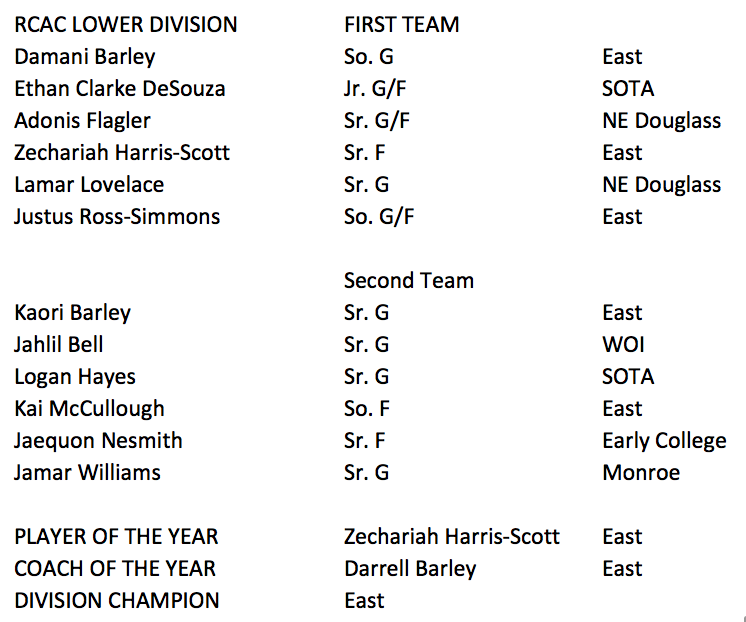 One Response to "Harris-Scott, McKinney earn RCAC Player of the Year honors"