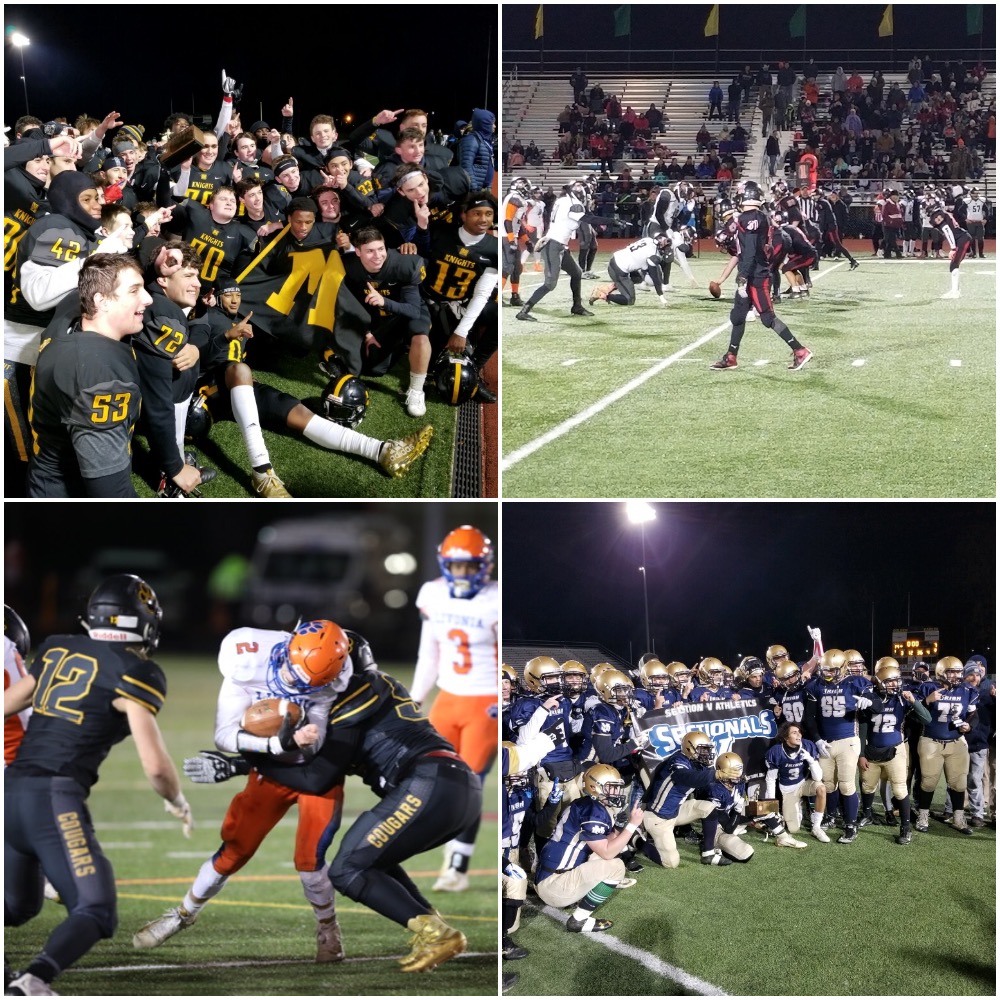 ALEXANDER 7
NOTRE DAME-BATAVIA 14
The Notre Dame Batavia (No. 4 NYSSWA Class D) varsity football program had been the most dominant team in Section V, exploding for 42.8 points per game while allowing only 7.0 en route to an undefeated record and defeated Alexander (No. 6 NYSSWA Class D) for the second time this season. The Fighting Irish were coming off a 52-6 dominating victory in the semifinals as well. READ MORE.

CANANDAIGUA 21
EAST 13
Zachary Wantuck ran in a pair of touchdowns on 21 carries for 139 yards and Canandaigua (No. 18 NYSSWA Class A) downed a third straight higher-seeded opponent to win its first sectional title since 2007. After a scoreless first quarter, both offenses came alive as East (No. 16 NYSSWA Class A) scored the first points of the contest with a Anthony Gilbert touchdown pass to Justus Ross-Simmons in the back of the end zone. The Braves answered quickly with a read-option touchdown from quarterback Bryan Boldrin to knot the score at 7-7. Shortly after, Mike Maxwell caught a 46-yard touchdown pass from Gilbert to put the Eagles up 13-7. In the closing minutes of the first half, Canandaigua took a lead it would not surrender after Zachary Wantuck scored on an 18-yard touchdown run and put the Braves up 14-13 headed into the half. A scoreless third quarter led to Wantuck adding the final touchdown of the game at the start of the fourth quarter with a three-yard touchdown run.

AQUINAS 27
MCQUAID 30
This was it: the matchup the entire Rochester area wanted to witness again this season. After a classic at Frontier Field nine weeks prior that saw McQuaid (No. 6 NYSSWA Class AA) defeat Aquinas (No. 8 NYSSWA Class AA) for the first time in 13 years, both teams hoped to see each other again in sectionals. Their wish was granted. It came as little to no surprise considering these squads were the cream of the crop in class AA and combined for a 17-1 record coming into Saturday’s matchup. READ MORE.

LIVONIA 12
HONEOYE FALLS-LIMA 0
Honeoye Falls-Lima (No. 17 NYSSWA Class B) had not been shutout the entire season until Saturday night. Alex Minnehan’s teammates on Livonia (No. 15 NYSSWA Class B), swarmed their quarterback, anticipating a postgame announcement that was hardly a surprise. READ MORE.

WARSAW/LETCHWORTH 26
LEROY 6
The Letchworth/Warsaw (LetSaw) (No. 10 NYSSWA Class C) varsity football program’s identity is centered around defense. Coming into Saturday’s game, Justin Mann’s squad had won 17 of their last 20 contests and allowed 8.8 points. LetSaw’s identity shone in the bright lights of the sectional final, shutting down LeRoy (No. 6 NYSSWA Class C) for a 26-6 victory and a second straight title. READ MORE.