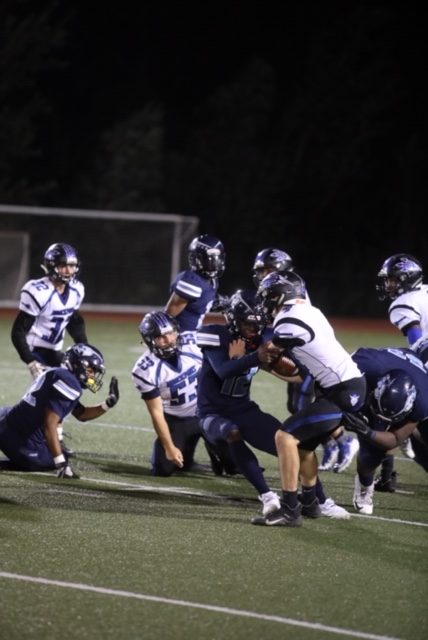 LEROY 32
EAST ROCHESTER/GANANDA 7
After exploding for 46 points last weekend, the LeRoy Knights varsity football team struggled to get going against the physical East Rochester/Gananda defensive line. Besides a safety at the start of the second quarter, Brian Herdlein’s squad racked up 123 yards of offense through the first 21 minutes of game action. READ MORE.

NEWARK 47
MIDLAKES 6
Travontay Murray led the Newark Reds on offense with 13 carries for 171 yards and five touchdowns. Tajhmere Greene scored on both of his carries on the night for 14 yards. Zachary Ludolph added 10 carries for 50 yards.

MARCUS WHITMAN/BLOOMFIELD 12
PENN YAN 35
Penn Yan scored 28 unanswered points between the second and third quarter to run away with the victory. Mekhi Mahan scored five times in three quarters to lead Penn Yan. He finished with 19 carries for 164 yards and three receptions for 29 yards. Kyle Berna went 8-for-15 passing for 89 yards and carried the ball 13 times for 87 yards. Kyler Lloyd added six carries for 37 yards. For Marcus Whitman/Bloomfield, Seth Benedict went 6-for-13 passing for 78 yards with two carries for seven yards and a touchdown. Justin Smith had 136 yards on 26 carries with a touchdown. Kyle Valastro led the receiving with three receptions for 61 yards and Ethan DeCarlo had two catches for 17 yards.

ALEXANDER 7
BOLIVAR-RICHBURG 6
Alexander fumbled the opening kickoff and Bolivar-Richburg scored the first points of the game off the turnover. The Trojans ran 66 offensive plays and recorded 328 yards of offense with two turnovers. Ty Woods scored the lone Trojan touchdown on a run from one yard out. Kicker Eric Cline nailed the PAT which turned out to be the winning point. Kam Lyons had three receptions for 61 yards and Woods had three receptions for 33 yards with 30 carries for 141 yards and a touchdown. Devin Dean had two catches for 17 yards and Hayden Walton had a catch for 25 yards. Nick Kramer led the team in tackles with eight and Dylan Busch and Hayden Walton each recorded six tackles.

ATTICA 48
BATH-HAVERLING 6
Attica went up 27-0 at the half and never looked back. The offense was led by Zach Strzelec who finished with 10 carries for 202 yards and three touchdowns. He also had 15 tackles and a fumble recovery on defense. Jake Gross had five carries for 110 yards and two scores. Lucas Krawczyk had a touchdown with 13 tackles and Zack Friedhaber added a reception for 37 yards for a touchdown from quarterback Jake Dressel. Joe Kubik, Josh Conrad and Lucas Johnson each added 11 tackles of their own. Tyler Meyer returned an interception for 38 yards.