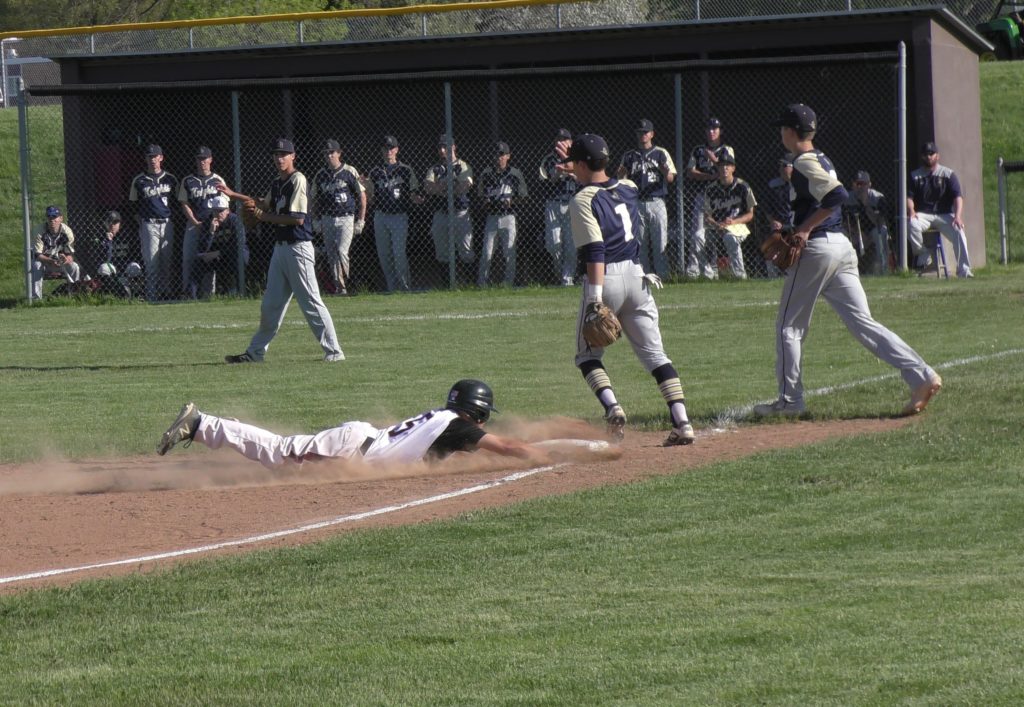 HILTON 1
BROCKPORT 5
Nick Johnson finished 3-for-3 including a two-out RBI single in a four-run third when Brockport (7-12) took a commanding and went on to win its fourth straight game. Johnson added a double, had two RBI and scored a run. Troy Leibert went 2-for-3 with a double, and RBI and two runs. On the mound, Leibert threw 6.0 innings and allowed one unearned run on three hits and had four strikeouts and two walks. Jason Story led the Hilton Cadets (11-8) going 2-for-4. Hilton’s starting pitcher, Austin Jennings, threw 2.2 innings and allowed five runs on seven hits and only one run was earned.

CHURCHVILLE-CHILI 13
GATES-CHILI 1
Josh Ferris started the game for Churchville-Chili and threw four innings innings. Joe Wolke threw two innings and Jake Keller threw the last inning to combine for the win. Jake Carrol led Churchville-Chili going 3-for-3 with three doubles and two runs. Jaden Nelomes, Josh Ferris, Joey Puglia, Wes Colucci and Johnny Bagley each added a hit during the contest. Devon Georgetti and Jake Vitale had two hits each while Mike Ribis and Matt Valone each had a hit for Gates-Chili.

McQUAID 4
RUSH-HENRIETTA 1
Drew Bailey led McQuaid (17-2) going 3-for-4 with three RBI and a run scored as the Knights downed Rush-Henrietta for the second time this season. After flying out in his first at-bat, Bailey knotted the game in the third with an RBI double to right field. In his next at-bat, he gave McQuaid the lead with a run-scoring single. Bailey brought home another run with a double in his final plate appearance. McQuaid starting pitcher, Ryan O’Mara, threw 7.0 innings and allowed just one run on three hits and had 10 strike outs on the night. After giving up a single to the first batter in the fourth inning, O’Mara retired the next 10 batters he faced. Ben Beauchamp doubled and scored a run. Noah Campanelli and Chris Ryder also crossed home for the Jesuit Knights. Bobby Sellers drove in the lone Rush-Henrietta run with a sacrifice fly in the first. Frank McCabe scored on the play. Cliff Genge struck out six and allowed two runs on five hits over five innings for the Royal Comets.

PITTSFORD MENDON 16
GREECE ODYSSEY 1
Pittsford Mendon’s (13-7) pitching staff combined to throw a two-hitter. Jon Surtel started the game for the Vikings and tossed 4.0 scoreless innings with five strikeouts. Karthik Mathew-Malik, Colin Smith and Riley Knickerbocker finished the game out throwing one inning each respectively. Mathew-Malik led the Knights at the plate going 3-for-6 with two doubles, an RBI and four runs scored. Hudson Bockmier went 3-for-4 with a double and three RBI. Greece Odyssey’s David Crawford went 1-for-2 and Joshua Hernandez went 1-for-3 on the night. 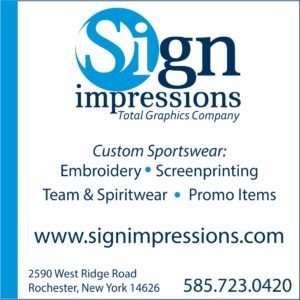 WEBSTER THOMAS 4
PENFIELD 8
Bobby Bradley missed homering on his Senior Day by a foot. He crushed a ball to left-center field in the bottom of the first inning for Penfield. It hit the yellow tape at the top of the wall but bounced back into play. READ MORE.

Sonny Burch strands the bases loaded with two-straight strikeouts. 6-2 @PHSPatriotsBB after three and a half. New arm for Thomas. @PickinSplinters pic.twitter.com/N2fzGrNFm4

IRONDEQUOIT 3
FAIRPORT 2
Irondequoit took advantage of an error in the seventh to score to score the go-ahead run and win its third straight. Chad Gartland led the Eagles going 2-for-4 with an RBI. The senior struck out 15 and allowed two runs on four hits in a complete-game effort. Frank Fernandes went 1-for-3 with an RBI and two runs scored. Fairport’s Peyton Olinski went 2-for-3 with a run and Anthony Roides went 1-for-2 with two RBI.

BATH-HAVERLING 1
LIVONIA 11 (5 innings)
Livonia’s Alex Minnehan started and allowed one run on two hits with six strikeouts and one walk over five innings. Jake Smith went 2-for-4 with a double, two RBI and two runs. AJ Davin went 2-for-3 and also had two RBI. Bath-Haverling’s (5-10) AJ Brotz and Austin Palmer both went 1-for-2 on the night.

PERRY-MOUNT MORRIS 8
GENESEO 6
Geneseo’s (12-6) rally was not enough to overcome a five-run deficit as Perry-Mount Morris held on despite being out-hit seven to six. Geneseo took a 3-1 lead after the second inning and was in command. A six-run third inning by Perry-Mount Morris and a one-run fourth was enough to hold off a three-run rally by Geneseo in the fourth. Geneseo’s Owen Lyons went 2-for-4 with a run and Daniel Kelly went 2-for-3 with a run to lead the Blue Devils.

KESHEQUA 7
YORK 5
York (7-9) unable to win at home against Keshequa (10-6). Matt McFarland led the way for the Knights going 2-for-4 with two runs scored. James Kennedy went 2-for-3 on the night and Ben Lyness Jr. went 1-for-4 with an RBI and a run. “We played a pretty good game against a good Keshequa team,” York head coach Ed Green said after the game. “They put the ball in play and forced us to play a clean game defensively. We had a few mishaps, but we can learn from them.”

ELBA 1
LETCHWORTH 11 (5 innings)
Letchworth’s (10-7) starting pitcher Evan Reding, picked up the win on the mound with five strikeouts and only gave up one run. Reding also went 2-for- 3 with two RBI and a run at the plate. Brett Vasile was 1-for-3 with a double, three RBI and a run. Nick Thompson went 2-for-4 with a run scored and three RBI.

RED JACKET 2
SOUTH SENECA 7
Nicholas Twardeski finished 3-for-4 with an RBI and two runs scored as South Seneca scored three runs in the first and two more in the second inning.  Lukas Day went 2-for-4 with an RBI. Spencer John was 2-for-3 with two RBI and three runs scored at the plate. John threw a complete game and allowed two runs, one earned run on two hits and had 12 strikeouts and two walks. Jarret LeGault led Red Jacket going 1-for-2 with an RBI, a run and a walk and Seth Gerlock went 1-for-2 with a run.

SODUS 1
GANANDA 9
Gananda scored eight runs in the first three innings. Zach Dier led the way for the Blue Panthers going 3-for-4 with a double, two RBI and a run. Tim McClare went 1-for-3 with a double, an RBI, a run and a walk. Gananda starting pitcher Jayden Castrechini, went 6.0 innings and allowed one run on four hits and had 12 strikeouts and a walk. For Sodus, Santo Caruana led the way going 2-for-3 and scored the only run.

FRANKLIN 17
HARLEY 18
In a wild back and forth contest that stressed out the LED lights in the Wolves scoreboard, HAC (10-6) came away with a walk-off win.  The Wolves scored in every inning but the fifth and all 18 starters for both teams scored at least one run in the game. HAC took a 17-13 lead into the top of the seventh but the Quakers ‘s (10-6) rallied with four to knot the game up at 17.  The Wolves responded in the bottom of the seventh, loading the bases with none out before Franklin forced out a runner at home and only needed a double play to get out of the jam.  HAC’s Jack Wheeler made sure that didn’t happen as he lined a single down the right field line, plating the winning run in walk-off fashion.

It was Wheeler’s second RBI of the game and second hit as well, ensuring HAC of an above .500 record in their first season back at the varsity level since 2015.  The last time HAC finished the regular season above .500 was in 2010, the same year they won their last sectional contest. Eli Curwin was one HAC’s offensive stars, driving in three runs and scoring twice himself.  Alex Sassaman was 3-for-3 at the plate with two doubles and three RBI.  Max Brown and Ben Friedberg both scored three times for the Wolves, while Brown, Friedberg, and Cai Rogers all notched two hits each.

Franklin received strong offensive efforts from Julian Cotto who slugged two doubles and drove in four runs on three total hits.  His teammate Luis Lopez banged out three hits and one RBI, while Jalen Breedy was 3-for-5 with three runs scored.  Greg Randsom also provide timely hitting in the ninth spot, going 2-for-4 with three runs scored and two RBI.