Will this Amerks team be remembered only for failure? 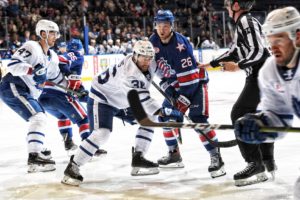 Sometimes legends for a lifetime within a minor league hockey city are made during the playoffs.

And sometimes teams create an everlasting memory for their post-season failure. For their inability to respond to pressure. To find another gear. To play at a level of pure desperation.

Despite finishing the regular season with 46 victories and 99 points, the Amerks are on the verge of what has been the prevailing theme in this city for a decade and a half: Getting bounced in the first round of the playoffs.

Jeremy Bracco scored twice, tying the game 1:54 into the third period before winning it 2:20 into overtime, as the Toronto Marlies stunned the Amerks and an Easter matinee crowd of 4,092 at Blue Cross Arena at the War Memorial by winning 3-2.

Just like that, the Amerks are on the brink of elimination in this best-of-five series. They must win at Toronto Wednesday and Friday nights (7 p.m., televised on MSG) in order to have a chance to play on home ice again.

Twice they have dominated for large stretches. In Game 1 on Friday they hit four goal posts and missed two empty nets in the first 22 minutes and the game remained scoreless. On Sunday they led 2-0 after two periods and outshot the Marlies 42-23 in the game.

But the only shot in overtime — by an ever-so-patient Bracco — went in.

History is against the Amerks

Franchise history says they’re in big trouble, too. The team hasn’t won a playoff series since round 1 in 2005. They’ve never defeated the Marlies in a playoff game (a collective 0-8, including 3-0 sweeps in 2012 and ’13).

And not since 1967 have the Amerks lost the first two games of a series at home and still prevailed. That was in the first round against the Cleveland Barons, also a best-of-five series.

“We’re going to stay confident no matter where we are,” said winger Wayne Simpson, who assisted on both Amerk goals (the second was scored by Kevin Porter).

Simpson admitted, however, that piling up scoring chances without scoring goals against a hardly world-beating goalie (Kasimir Kaskisuo) is getting old. Very old.

“We need to get a lot hungrier around the net,” Simpson said. “We need more battle.”

Indeed, the Amerks have had an inordinate number of high-quality chances. Smith was robbed as he barged to the goal mouth 31 seconds into the game. Remie Elie was stopped on a two-on-one fast break 50 seconds later. Tage Thompson had a breakaway at 9:40 but couldn’t score Kurt Gosselin had a point-blank redirection of a perfect centering pass and found nothing but pad at 11:50. And Victor Olofsson hit ANOTHER post at 14 minutes.

And that was just in the first period.

“They should be in the back of the net,” Amerks coach Chris Taylor said. “We’re down two-nothing because we haven’t executed (on scoring chances).”

Contrast that with the Marlies, who only need a precious few opportunities to score.

Porter’s unwise slashing penalty in the offensive zone on an absolutely nothing play gave the Marlies a power play on the first shift of the third period. While he says he did slash the stick of Michael Carcone, he said that’s not enough to warrant a penalty call. The rule book says otherwise, especially since it has been a point of emphasis for referees.

“They said it was (a penalty) because he turned the puck over,” Porter said.

The Marlies needed eight seconds to score, with Chris Mueller swatting home his second whack at a bouncing puck in the deep slot.

Just 55 seconds later, Bracco slipped away from Gosselin at the top of the crease and slammed home a rebound.

They hadn’t played two minutes of the third period and the game was tied 2-2. Amerks, meet pressure. Pressure, meet the Amerks. There’s no doubt the Amerks were feeling it big-time.

“I think it’s very normal,” Bracco said. “You lose the first one at home and then have a 2-0 lead going into the third and within a minute and a half it’s tied, you’re going to tighten up.”

The Marlies know they have been fortunate. They’ve had some puck luck, Bracco said.

“Obviously we were outplayed, that was evident to anyone who watched the game,” Bracco said. “But ‘Kaz’ was great today; he was great both games.”

His winning goal came as he slithered up the right wing boards and was free to take Mueller’s long outlet pass on the Amerks side of center while Dmytro Timashov barreled into the zone on left wing.

Bracco angled toward the net and defenseman Zach Redmond — who read the play as a two-on-one, Taylor said — did the slide on the belly in an attempt to take away the passing and/or shooting lane.

Bracco didn’t opt for either, instead slicing right to left across the slot and, with Timashov anchored at the top of the crease — think Brett Hull — and goalie Scott Wedgewood sprawled on the ice, fired a backhander into an open net.

“The guy made a great play, hats off to him,” Smith said.

What are they made of?

So now it’s do-or-die on Wednesday. And, if the Amerks manage to win, then it will be do-or-die again on Friday.