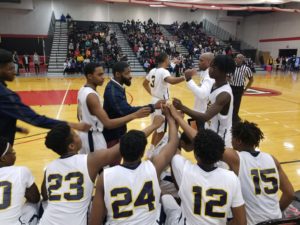 NORTH CHILI, N.Y. – Jakhi Lucas and Kayshawn Ross combined for 12 points in the second overtime as UPrep defeated Bishop Kearney, 98-96, in the first round of the Section V Class AA playoffs.

“Everybody stepped up,” Lucas said after the win. “It was a good game.”

Despite having to exit the court with one minute left in the game due to cramps, Lucas scored the UPrep Griffins’ first six points of the period on 4-of-4 shooting from the foul line and a layup.

“I refuse to lose,” the senior guard said when explaining his resilience. “I’ve been to the Blue Cross Arena for the championship two years in a row and lost, so I couldn’t lose in the first round my senior year. So my mentality was that ‘I have to win this game, some way, some how.’ Whether on defense or offense, I knew I had to win this game.”

Ross netted six of the Griffins’ last seven points of the game on a floater and went 4-of-6 from the free throw line in the remaining 37.3 seconds of the contest.

“I had to stay confident, stay calm, and push through for my team,” the junior forward explained.

Lucas scored 16 in the first half on five layups, a three-pointer and 3-of-4 from the charity stripe. The senior guard finished with 31 points on eight layups, a floater, a shot from beyond the arc and 10-of-12 at the free throw line.

“I played well,” Lucas said. “Second half, I kind of slowed down because I was kind of hurt.”

Ross poured in 23 of his 31 points in the second half on a pair of three-pointers, two layups, a mid-range jumper, a floater and 9-of-13 from the charity stripe.

“I put a lot of effort in,” Ross said when explaining his second half performance. “Couldn’t let my team down, so I had to work as hard as I could.”

Na’Zea Folks scored all 24 of his points after the first quarter, including 11 in the second on a layup, a long-range shot and 6-of-6 from the foul line. For the night, the junior forward knocked down four shots from beyond the arc, made a pair of layups and went 8-of-10 at the free throw line.

For Bishop Kearney, Kidtrell Blocker amassed 39 of his game-high 45 points in the second half on six three-pointers-including one for a four-point play, two layups, a pair of floaters, a breakaway dunk and 9-of-10 shooting from the free throw line.

Miles Monchecourt scored 12 of his 15 points in the first and third quarters combined on three layups, two mid-range jumpshots from the top of the key and a pair of foul shots. The junior forward knocked down a three-pointer in the double overtime as well.

Antwan Williams netted 11 points on a pair of floaters and went 7-of-12 from the charity stripe.

Jamar Williams (9), Miles Rose (7), Deiontray Dixon (6) and Michael Gentile (3) rounded out the scoring for the Kings.

UPrep will play No. 1 seed Hilton in the quarterfinals Friday night at 7:00 PM.