ROCHESTER, N.Y. —  Andrew Bartlett led Fairport to a pair of wins including a divisional clincher. Jeff Jung, Jr. helped Olympia snap a losing streak. Jacob Shadders guided Pittsford Mendon to a share of the divisional lead going into the final week of the season, and Irondequoit’s Patrick Thomas is well on the way to recovery.

The quartet earned Monroe County divisional Player of the Week honors for the week of February 5th – 11th, 2018.

Bartlett scored a total of 37 points in a pair of wins last week to grab Monroe County DI honors. The senior guard connected on 7 of 13 attempts from behind the arc for the week and converted on all 10 free throw attempts in Red Raider wins over Bishop Kearney and Rush-Henrietta. Bartlett handed out 14 assists in the contests. He scored 16 fourth-quarter points in Fairport’s DI clinching 63-48 victory over Rush-Henrietta on Friday.

Thomas earned the DII award with 34 points and 16 rebounds as Irondequoit picked up a win over division-foe Churchville-Chili and another victory this one against Wayne in a rematch of last year’s regional-qualifier. Thomas, who missed nine games earlier in the season with a wrist injury, connected on 15 of 22 shots in the two games. The junior forward added four assists, a steal and a block to his numbers as well as taking two charges in the win over Wayne.

Shadders, who also has been limited this season due to injury, scored 43 points in three Mendon wins last week including 16 to help the Vikings beat Greece Athena, 79-76. That victory avenged a previous loss to the Trojans and pulled Mendon into a three-way tie atop DIII. The freshman guard missed five games earlier this season with a foot injury. He is hitting 43.5 percent of his shots from the floor including 34 percent from long range. He is hitting 87 percent from the free throw line.

Jung netted 36 points as Olympia split a pair of games last week. The junior guard/forward connected on 8 of 21 attempts (38.0 percent) from long range to pace the Spartan offense. He hauled in 13 rebounds over the two contests as well as collecting three blocks, two assists and a steal. Jung has topped the 20-point mark in four games this season and reached double figures in 13 of Olympia’s last 15 games. 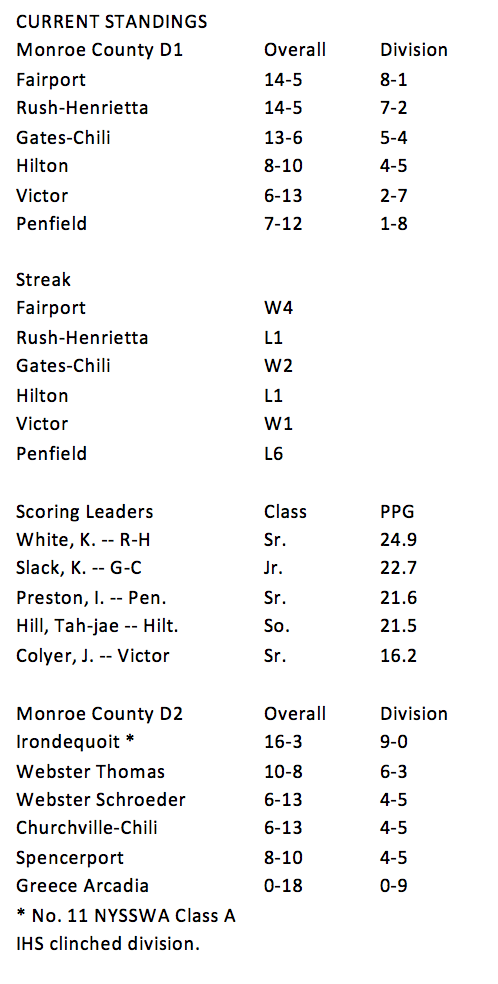 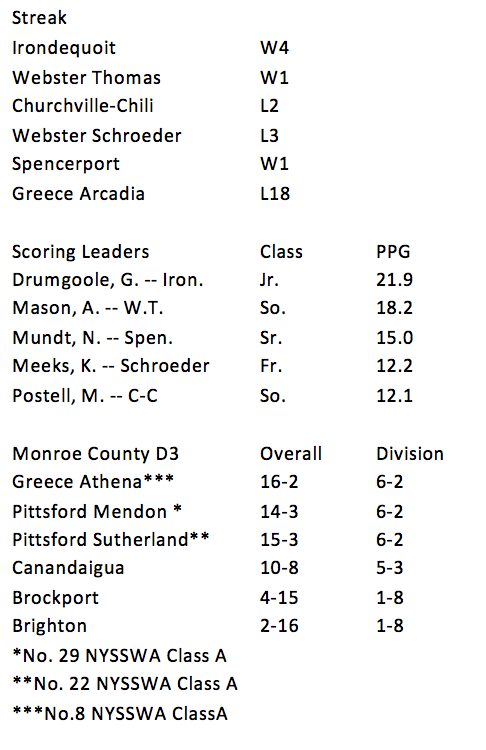