BUFFALO EAST 79
EAST HIGH (ROCHESTER) 49
Chaz Washington scored 17, and Nick Wise added 14 for the East High Eagles. East High trailed 23-19 after the first quarter before being outscored 17-7 in the second stanza. The Eagles trimmed the lead to single digits briefly in the third quarter.

LIVERPOOL (III) 68
ELMIRA (IV) 52
Naz Johnson finished with a game-high 23 points for a two-day total of 45. Alan Willmes Jr. had 15, and Joe DeSocio added 10 points as Liverpool finished 2-0 for the weekend. READ MORE.

NORTHSTAR CHRISTIAN ACADEMY 70
CORNING (IV) 59
It was fitting that Miles Brown brought the drought to an end. The junior guard, who was named first team All-State a season ago, closed the quarter with back-to-back 3-pointers on his way to a 38-point performance…READ MORE.

ELMIRA EXPRESS (IV) 60
BISHOP KEARNEY 54
Nahjor Mack scored 10 of his game-high 25 points in the fourth quarter as Elmira pulled away late. Trailing 49-48, Daron Driscoll got ahead of the for a layup to give Elmira a lead it did not surrender with little more than three minutes to play. Mack followed with a floater and a baseline drive before converting four of four free throws to ice the contest. AJ Gray, despite picking up his third foul of the game in the second quarter, led Kearney with 15 points. The junior forward fouled out in the final minute. BK’s Shykell Brown, who played the last 6:29 with four fouls, scored 13 points. Kevin Goode Jr. hit four 3-pointers and finished with 14 points. Elmira’s Dan Fedor had 12 points.

WILLIAMSVILLE SOUTH (VI) 58
AQUINAS 44
Greg Dolan poured in 27 points and grabbed 15 rebounds as Williamsville South erased a halftime deficit to beat Aquinas. Dolan connected on 9-of-27 shots from the floor and 9-of-11 from the free throw line. Kidtrell Blocker paced eight Li’L Irish scorers with 11 points. Tyler Warner collected 10 rebounds to go with six points. Ruben Torres added eight points for Aquinas. Williamsville South forced 17 AQ turnovers which they converted into a 19-15 advantage in points off miscues. The Billies hauled in 52 rebounds including 24 on the offensive end which they used to score 15 second-chance points. Aquinas had39 rebounds. Williamsville converted 22 of 28 free throw attempts. AQ finished 9 of 21 from the line.

Fairport benefited from two 25-point quarters, finishing the second and fourth quarter strong, while holding Hilton to 11 points total between the two quarters. They hit 13 shots from downtown in the game, equaling their total from a game against Webster Schroeder earlier in the week.

RUSH-HENRIETTA 80
PENFIELD 58
Shamire Broyld paced three Rush-Henrietta scorers in double-figures with 20 points in a game that saw the Royal Coments race out to a (22-5) first quarter lead . Kailee White and Mecca McCullough chipped in with 16 points and 11 points respectively. Isiah Preston led all scorers with a game-high 27 points, 18 of them coming in the second half in defeat for Penfield.

Slack knocked down a game-winning three-pointer for Gates-Chili with 5.9 seconds remaining in overtime.

Athena cruised to the win behind their offense, which scored more than 20 points in three of the four quarters, with the exception of the third.

Batavia opened both halves strong, scoring 25 points in the first quarter and 23 in the third.

A 21-6 run to open the game helped HF-L build a quick lead, with VanNewkirk and Eastman each scoring eight points. They led 39-17 at the half .

PITTSFORD SUTHERLAND 65
WILSON MAGNET 58
Wilson’s Robert Davis stuck a 3-pointer with 43.6 seconds remaining to make it five-point game at 63-58. The Wildcats forced a five-second call on the ensuing inbound, but could not convert on the opportunity. READ MORE.

SOTA 79 OT
AVON 77
Reggie Smith scored a team-high 24 points including four in overtime to lead SOTA (3-1). Smith hit five 3-pointers and finished 9-of-13 from the free throw line. Logan Hayes connected four times behind the arc in the second quarter and added 19 points for the Silverhawks. Joe Denegal chipped in 13, and Ethain Clarke DeSouza had nine in the win. Avon’s Connor Taylor led all scorers with 30 points. Aaron Ghent had 18.

MCQUAID 54
NIAGARA FALLS (VI) 76
Roddy Gayle topped Niagara Falls with 17 points, followed by Quran Dubois with 15 and Tazaun Rose with 11. Kobe Long, a sophomore, led McQuaid with 15 points. Sophomore Jermaine Taggart added 12 points of his own, while senior Josh Purcell netted nine points and pulled in eight rebounds. Niagara Falls outscored McQuaid 45-26 in the second half to power their way to the win.

MYNDERSE 55
NEWARK 47
Senior Devin Anderson’s 17 points were good for the Mynderse team lead, followed  by fellow seniors Quentin Battle and Hunter Haust with 12 and 10 points each. Taylor Clements, a senior, led Newark with 17 points, while senior Terry Anglin had 16 points.

AQUINAS 36
NAZARETH (VI) 56
Dre Turnipseed’s 18 points led Nazareth, with Bryan Medy adding 14 of his own. Both scorers were helped by an 11 rebound night from Michael Young and Jonah Hillard’s 10 rebounds on the evening. Kidtrell Blocker and Justin Johnson tied for Aquinas’ team lead for scoring with nine points each.

Nazareth opened up the second half with a 16-3 run to take an 18-point lead, a deficit Aquinas was unable to comeback from. 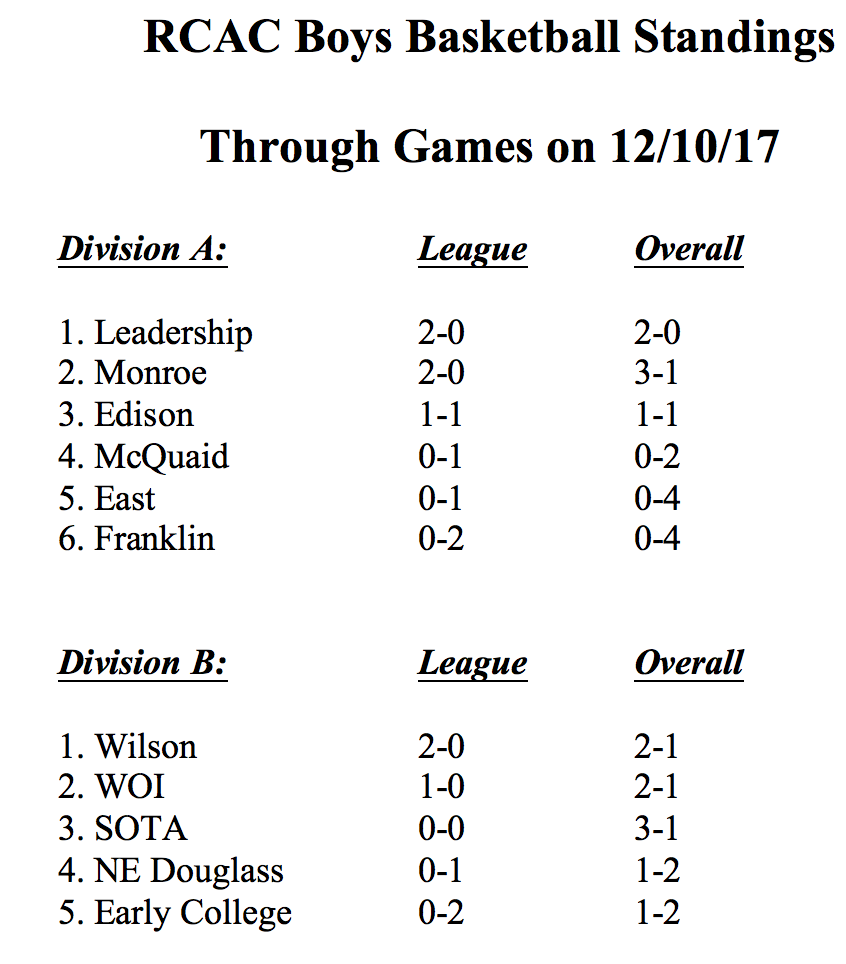 Section V Roundup: Miles Brown and Northstar upend Class A opponent; Slack and G-C improve to 2-0 and Irondequoit takes no prisoners added by Paul Gotham on December 10, 2017
View all posts by Paul Gotham →