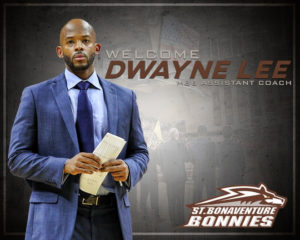 Lee was an assistant coach at Fairleigh Dickinson the past four years. A graduate of famed St. Anthony’s (N.J.) and Saint Joseph’s University, Lee has roots in the Atlantic 10 Conference and throughout the northeast.

Lee helped Fairleigh Dickinson reach the NCAA Tournament in 2016 when the Knights captured the Northeast Conference’s automatic berth. Despite having the third-youngest roster in the nation, FDU enjoyed one of the biggest turnarounds in the NCAA. The Knights’ 18 victories marked a 10-win improvement from the previous season.

Lee began his coaching career at Wagner as the graduate manager in 2012-13.

Lee was a standout player in high school, college and professionally. A native of Jersey City, N.J., Lee played for Hall of Fame coach Bob Hurley at St. Anthony’s High. Lee helped the Friars to two straight New Jersey State Tournament of Champions titles and a No. 2 national ranking by USA Today.

Lee went on to play in the Atlantic 10 Conference at Saint Joseph’s for coach Phil Martelli from 2002-06. Over his four-year career on Hawk Hill, Lee helped Saint Joseph’s to two NCAA Tournament appearances and one NIT berth. All told, Lee was a part of 96 wins, the second best total for a four-year class in school history, while finishing 11th in school history with 371 assists.

After graduating with a degree in marketing, Lee played professionally for Sellbytel Baskets in Germany’s top division. He later helped the Vermont Frost Heaves to the ABA Championship and then concluded his playing career in 2011-12 with Etha in Cyprus’ first division.

“We’re excited to have Dwayne join the program. He is a high character person and coach. He is very familiar with the Atlantic 10 and the areas of the country we recruit,” Schmidt said. “He is a great teacher on the court who will complement our staff well. His background as a player in the A-10 under coach (Phil) Martelli and in high school at Saint Anthony’s speaks for itself.”