Ranger Rising, Schroeder staying steady and has anybody noticed what Brockport is doing?

Webster Schroeder 5 Victor 0
Josh Simons scattered four hits over seven shutout innings, and the Webster Schroeder Warriors improved to 14-0. Simons struck out six, walked none and hit one batter. The senior threw 87 pitches – 57 for strikes and improved to 4-0 on the season. Phil Ferranti paced the Schroeder offense going 3-for-3 including a double, a walk, two RBI and two runs scored. Shane Marshall went 2-for-4 with three stolen bases and two runs scored. John Stocum drove in a pair of runs with two hits in three trips to the plate. Stocum also walked. Tommy Baxter walked and scored a run. Tommy Winn added a hit and a walk. Nate Hampson started for Victor and allowed four runs (two earned) on six hits. The junior struck out seven and walked four. Louie Schaefer was 2-for-3 for the Blue Devils. Schroeder, ranked No. 1 NYS Class AA, is scheduled to host Greece Arcadia in a Division 2 matchup on Monday. Victor will host Hilton in Division 1 play.

Penfield 8 Rush-Henrietta 1
Kyle Straube allowed one run on three hits over seven innings, and Penfield improved to 8-3 on the season with its second straight win and seventh out of their last eighth games.   Straube fanned seven, walked two and improved to 3-0 on the season. The senior right-hander induced nine groundouts and four fly ball outs. Jack Taylor snapped a one-all tie in the sixth with a one-out double that plated Ryan Kalbfus. Taylor eventually came home to score in the three-run inning and finished 2-for-4 on the day. Kalbfus went 2-for-4 including a two-run home run in a four-run seventh as the Patriots put the game out of reach. Noah Wulforst had a double, an RBI and a run scored. Rush-Henrietta’s Mitch Hoffower struck out six and induced nine groundouts. Lucas Haefner was 1-for-3 with an RBI.

Spencerport 4 Greece Athena 1
Joshua Brase finished 2-for-4 including a two-out RBI double as the Rangers, who won their last two games in walk-off fashion, grabbed a 2-0 lead in the first inning. Brase connected on two of Spencerport’s six doubles on the day, and the Rangers improved to 6-7 on the season. Nick Bellone allowed an unearned run on three hits over seven innings of work. Bellone threw just 68 pitches (53 for strikes) in the complete-game effort. He fanned five and added a hit and RBI at the plate. Aidan Eldridge, Thursday’s walk-off hero, went 2-for-4 and started the Rangers two-run first with a two-out double. Eldridge came around to score on Brase’s two bagger. Joseph Carroll doubled and drove in a run. Jake Kimble struck out two in six innings of work for Greece Athena.

Fairport 7 Greece Arcadia 2
Junior Teddy Sharman collected three hits in three at bats, and sophomore Anthony Roides hurled four shutout innings as Fairport rebounded from Friday’s loss to Webster Schroeder and improved to 8-3 on the season. Sharman drove in two runs, and Fairport scored two in the second and eventually led 7-0. Roides struck out three and allowed one hit. Zack Salisbury hurled a scoreless inning of relief. Matt Adams finished 2-for-4 with two runs scored for the Red Raiders, and Nick Turturro went 2-for-5 with a run scored. Greece Arcadia’s Nathan Yantz had a hit, two walks and a run scored. Ben Ford tossed two scoreless innings in relief for the Titans.

Pittsford-Mendon 9 Irondequoit 4
Jake Ring finished 3-for-4 on the day including a leadoff single in a five-run Pittsford-Mendon second. Ring later doubled and scored three times on the day. Taylor Genier went 2-for-3 with two runs scored, and Billy Dalton drove in three and scored a run with a single and a sacrifice fly. Colin Smith was 2-for-4 with a walk and a run scored. Sam Cesura started, struck out nine over five innings for the win. Irondequoit’s Chris Butler was 1-for-2 with a gran slam in the third inning. AJ Gartland was 2-for-4 with a run scored.

Brockport 6 Hilton 1
Dom Frosini broke open a 1-1 game with a two-run double in the top of the fifth, and Brockport went on to win its fifth straight. Frosini plated Frank Lauricella and Noah Schultz on the play. Sam Velletri followed with an RBI sacrifice fly. Frosini finished 2-for-3 with two doubles, three RBI and a run scored. The senior allowed an unearned run on two hits over four innings of work on the mound. Quinlan Ignaszak struck out four and surrendered one hit over three scoreless innings in relief. Ben Jacquez was 2-for-3 with two runs scored for the Blue Devils. Hilton’s Ryan Schmitt was 2-for-2 with a walk and a run scored.

McQuaid 3 Clarence (VI) 0
Hunter Walsh struck out six, walked one and scattered four hits over six shutout innings for the win. Tyler Cyrus retired the only batter he faced for the save. Ben Beauchamp finished 2-for-3 with a double and an RBI. AJ Fina doubled and scored a run. Tyler Griggs walked twice and came around to score a run. Tom Manno was 1-for-2 with a walk and a run scored.

St. Joe’s 11 McQuaid 3 (VI)
Mack Duffy started and allowed two runs on three hits over five innings, but St. Joe’s scored all 11 of its runs in the sixth inning. Tyler Griggs was 2-for-3 including a solo home run in the top of the sixth. AJ Fina and Billy Kehrig both walked twice and scored a run. Tyler Cyrus was 1-for-3 with an RBI.

St. Mary’s 3 Aquinas 1
Mikey Hernandez allowed two runs over six innings on the mound and supplied AQ’s only run with a solo shot.

Aquinas 15 Red Jacket 3
James Huber connected on a grand slam and scored three runs for the Li’l Irish. John Altpeter was 2-for-4 and drove in a pair of runs. Tim McMahon allowed one run over five innings for the win.

Batavia 5 Sutherland 4 (8 innings)
Chandler Baker finished 4-for-5 including a double to drive in the go ahead run in the top of the eighth. Hunter Mazur allowed one hit over an inning and two-thirds for the win. Casey Radka started and struck out five while surrendering four hits over six and a third. Jerry Reinhart went 1-for-3 with an RBI. Radka worked three walks and drove in a run. Mazur was 1-for-3 with an RBI.  Sam Sallome had a double and an RBI.

Spencerport 3 Hilton 2
Peter Mancuso scampered home on a wild pitch in the bottom of the seventh, and the Spencerport Rangers walked off for the second time in as many nights. Mancuso reached on a walked, and Aidan Eldridge, Thursday’s hero, dropped a sacrifice bunt. An error on the play left runners on second and third setting up the game winner. The Rangers used a two-out rally in the fifth to tie the game. Trailing by two, Christopher Carroll singled, and Mancuso doubled. After Eldridge reached on a walk, Joshua Brase knotted the game with a two-run base hit. Jarod Barnard struck out seven and allowed four hits in a complete-game effort for  Spencerport (5-7).  David Stirpe was 2-for-3 with a walk and two runs scored for Hilton. Ryan Schmitt finished 2-for-4 with two RBI for the Cadets.

Webster Thomas 3 Victor 1
Justin LaLoggia pitched a complete game 5-hitter, and Ryan Hill plated the go-ahead run in the fourth for the Titans (8-3). Ethan Maltman reached with a base on the balls in the fourth. Joe Paul singled. Derek Ogi worked a walk before Hill delivered. Thomas tacked on another run in the fifth when Devin Mulcahy singled. Damian Wright walked, and Ryan Mason dropped a sacrifice bunt to move the runners. Ben Hufland followed with an RBI fielder’s choice. Mulcahy made a diving catch in left field with runners on first and second in the sixth to preserve the lead. Tommy Ryan brought home Victor’s only run with a squeeze bunt in the third to score Jarod Signorelli. Mulcahy finished 2-for-4 for the Titans. Hill and Hufland both went 1-for-3 with an RBI. Signorelli was 2-for-2 with a walk. Victor junior Andrew Westbrook took the loss on the mound throwing four innings while allowing one earned run on four hits. Sophomore Drew Delaney pitched three innings of relief for the Blue Devils allowing one earned run and one hit. Sophomore shortstop Santino Ross made some spectacular plays in the field.

Webster Schroeder 6 Fairport 5
Sophomore Tommy Winn finished 3-for-3 on the day and brought home the eventual game winner with a two-out single in the sixth as Schroeder, ranked No. 1 NYS Class AA, erased a three-run deficit and improved to 12-0 on the season. Ben Mulhall allowed five runs (three earned) on six hits over six innings for the win. The senior left-hander struck out two and walked none. Shane Marshall worked a scoreless seventh for the save. Schroeder rallied with two outs to score three runs in the fifth to tie the game. John Stocum sparked the comeback with a walk. Josh Simmons singled, and Winn worked a free pass to load the bases. Mike Masucci and Marshall followed with infield hits as Schroeder tied the score. Winn tripled, drove in two and scored twice. Stock scored three runs. Masucci was 2-for-4 with two RBI. Fairport’s Mike Sabatine finished 2-for-4 with two runs scored. Evan Newkirk was 2-for-3 with a run scored and an RBI. Tyler Smith drove in two runs.

Rush-Henrietta 7 Greece Arcadia 4
The Royal Comets erased a four-run deficit and improved to 8-1/4-0 on the season. Lucas Haefner pitched 4.2 innings in relief for the win. Mitch Hoffower, Jason Bocklage, and Justin Varney collected two hits apiece for R-H. Justin Augustine had a three-run home run in the third for Arcadia.
Brockport 9 Eastridge 2
Mike Jamele struck out eight and allowed one unearned run on seven hits over five innings as Brockport won its fourth straight and improved to 6-6 on the season. Jamele finished 1-for-3 with a double, a walk, two runs scored and an RBI at the plate. Cole Penders drove in two runs with a triple, and Ashton Scott added a pair of RBI. Gordon Fisher and Sam Velletri collected two hits apiece for the Blue Devils. Fisher scored two runs. Justin Derleth was 3-for-4 for Eastridge. Mandel Green finished 2-for-4 with an RBI.
Greece Odyssey 11 Brighton 9
Patrick Bigham finished 2-for-3 with a double, a walk, two RBI and two runs scored to lead Odyssey. Bigham struck out five over six innings of work on the mound. Josue Fontanez and Jeff Wilson scored two runs apiece for the Leopards. Vince Alongi drove in two for Odyssey.
Penfield 19 Irondequoit 3
Justin Harman allowed one run over five innings, and the Penfield Patriots pounded out 22 hits. READ MORE.

Wayne 5 Midlakes 4
Wayne won its first game of the year with a walk off. Tim Catalano singled in Tom Embury to cap a three-run comeback in the bottom of the seventh.  Logan Holgado went the distance on the mound picking up his first varsity win allowing two hits and striking out five. Sean Flannery led the offense going 2-for-3 with a double and a sacrifice fly that tied the game in the seventh. Devin Hicks struck out seven for Midlakes. 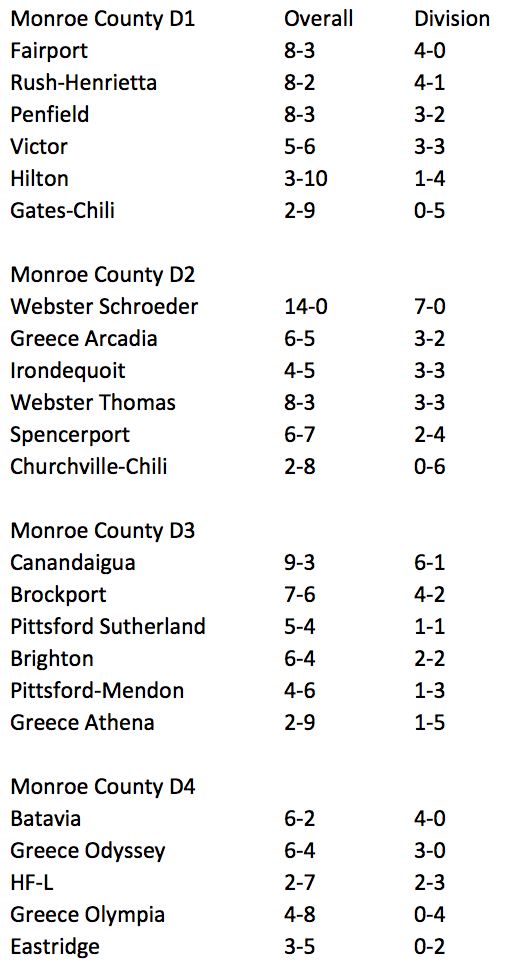 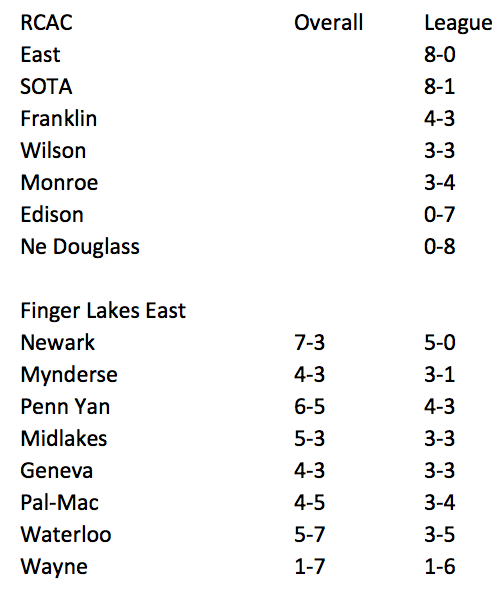 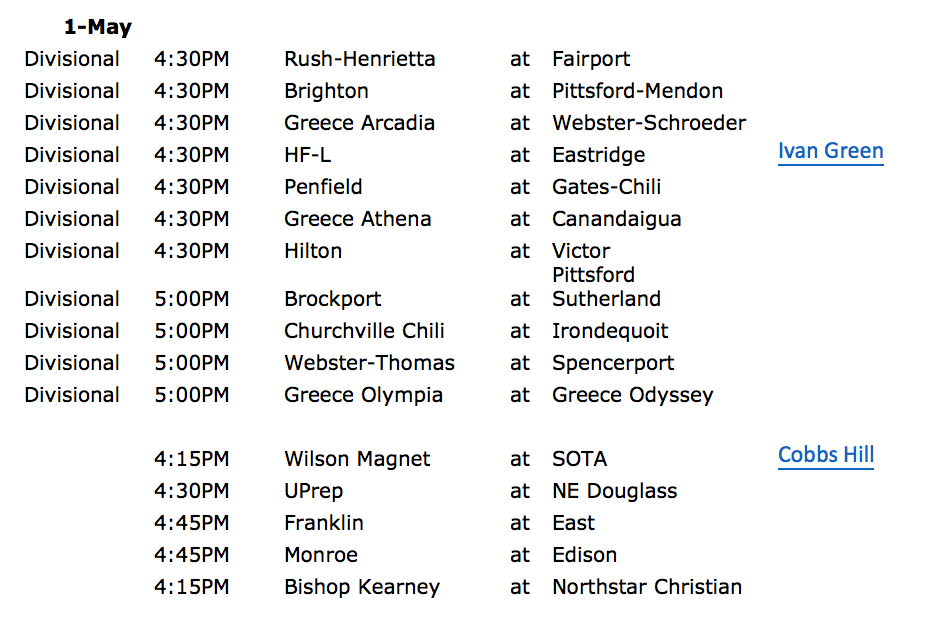 Ranger Rising, Schroeder staying steady and has anybody noticed what Brockport is doing? added by Paul Gotham on May 1, 2017
View all posts by Paul Gotham →

One Response to "Ranger Rising, Schroeder staying steady and has anybody noticed what Brockport is doing?"