Pittsford Sutherland 5 Canandaigua 3 (16 innings)
It took 16 innings and more than 24 hours to determine a winner between Pittsford-Sutherland and Canandaigua.  Matt Wang struck out three and allowed one run on two hits over four innings of work out of the bullpen for the win. Layton Cummings was 4-for-6 with a walk and a run scored to lead the Sutherland offense. Max Carver struck out 10. Jack Zielinski doubled home a pair to give Sutherland a two-run lead in the top of 16th. Conner Fisher set a Canandaigua program record with six hits in the game. Tanner Cooper struck out 11 for the Braves. The game was suspended because of darkness in the 11th inning on Monday. Sutherland improved to 4-2. Canandaigua fell to 6-3. Both teams meet again Wednesday at Sutherland for 4:30 PM start.

Williamson 3 Gananda 2
Kris Bulman went the distance for Williamson giving up one earned run and striking out seven without surrendering a walk. Gary Immesoette went 2-for-3 and scored one run for Williamson. Tim McClare took the loss going five innings, striking out 10 and giving up one earned run. McClare also went 3-for-3 at the plate and scored once. Cody Hill finished 1-for-3, and Jayden Castrechini was 1-for -2.

Sodus 2 Clyde-Savannah 0
Alex Savory struck out 17 over seven innings of work and allowed two hits for the win. Jared Wren drove in both Sodus runs with an RBI single in the bottom of the sixth.  Clyde-Savannah’s Jared Murray allowed two runs on four hits over six innings. of work. 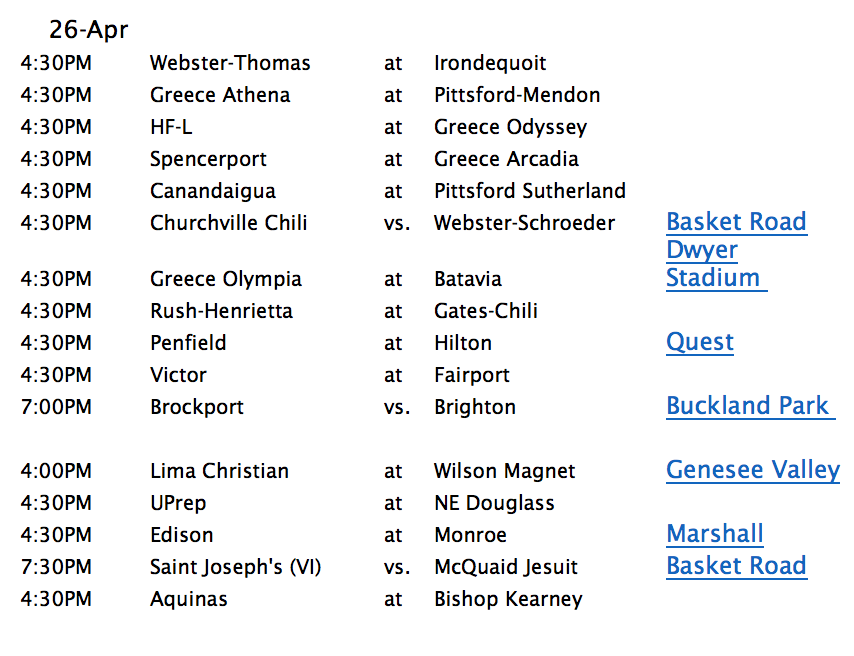