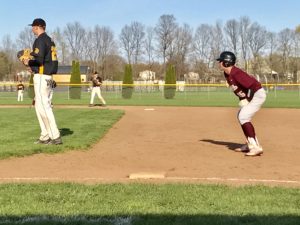 Fairport 6 Victor 2
Tyler Smith allowed two runs (one earned) on six hits over six innings for the win. The junior struck out seven, walked two and threw first-pitch strikes to 17 of 27 batters faced. Evan Newkirk, Mike Sabatine and Nick Turturro paced a 10-hit attack. Sabatine finished 2-for-4 with a run and an RBI. Newkirk was 2-for-3 with a walk, run scored and an RBI. Nick Turturro drove in two with two hits. The senior also scored a run and walked once.  Owen Delforte was 2-for-3 with a double and an RBI for Victor. Fairport improved to 6-2 on the year.

Webster Thomas 6 Irondequoit 4
Ben Hufland plated Ethan Maltman with a single in the fourth, and Webster Thomas erased a 4-0 deficit in Monroe County Division 2 play. Maltman led the inning with a double and stole third before Hufland connected on the eventual game winner. Trailing 4-0 in the second, Damian Wright doubled. Maltman and Hufland both plated runs for the Titans to cut the deficit in half. Thomas knotted the game on four straight singles in the third. Ryan Carragher, Devin Mulcahy and Damian Wright loaded the bases before Ryan Mason tied the game with a two-run base rap. The Titans tacked on an insurance run in the sixth when Derek Ogi and Ryan Hill hit back-to-back doubles. Hufland, Maltman, Mulcahy and Wright finished with two hits apiece. Hufland  allowed five hits over a complete-game effort for the win. The senior allowed one hit over the last five innings and retired 15 of the last 17 hitters he faced. AJ Gartland highlighted a four-run Irondequoit second with a two-run single.

Webster Schroeder 11 Churchville-Chili 4
Schroeder sent 11 to the plate in a decisive third inning as the Warriors erased a three-run deficit and improved to 10-0 on the season. Tyler Candelaria, Phil Ferranti and Mike Masucci all delivered RBI hits in the seven-run inning. Josh Simons had an RBI sacrifice fly in the second. Shane Marshall led the game with a home run. After allowing four runs in the first, Simons hurled four shutout innings. Anthony West tossed two scoreless innings of relief for Schroeder. Churchville-Chili’s Andrew Curtin fanned three and did not allow a hit over 2.2 scoreless innings of relief. The Saints’ Dillon Strine retired all four batters he faced.

Canandaigua 2 Sutherland 2  (susp. 11 innings)
Game called because of darkness after 11 innings, and play is scheduled to resume Tuesday, 4:30 at Evans Field.  Canandaigua’s Tanner Cooper started and threw 7.1 innings. The Stony Brook commit struck out 11 and allowed one run. Sutherland’s Max Carver started and hurled 6.1 scoreless innings with 10 strike outs.  Conner Fisher was 4-for-5 with an RBI for Canandaigua. Layton Cummings was 4-for-4 with a double for Sutherland.

Brockport 3 Brighton 2
Quinlan Ignaszak struck out seven and allowed two runs on five hits over seven innings including six scoreless to end the game as Brockport came from behind to beat Brighton. Ignaszak walked one and retired 15 of the last 17 faced. He finished 2-for-3 at the plate with a double and two RBI. Gordon Fisher walked, singled and scored a run. Cole Penders chipped in a hit in two at bats with a walk and run scored. Brighton’s Isaac Nelson and Andrew Zibuck both doubled and collected an RBI. Nelson scored a run.

Penfield 5 Hilton 3
Kyle Straube allowed three runs on five hits over 6.1 innings, and Penfield improved to 6-2 on the season. Straube struck out three, walked two and threw first-pitch strikes to 20 of 25 batters faced. Ryan Kalbfus and Jack Taylor both finished 1-for-3 with an RBI and run scored for the Patriots. Paul Cullen drove in a run with a hit. Noah Wulforst went 1-for-3 with a run, and Andrew Ebersol finished 3-for-4 on the day. Hilton’s David Stirpe was 2-for-3 with an RBI and a run scored. Gavin Moore finished 2-for-3 and drove in a run. Max Hendry came out of the bullpen for the Cadets and pitched 1.2 scoreless innings.

Greece Odyssey 8 Honeoye Falls-Lima 0
Pat Bigham struck out seven and hurled a 2-hitter. The senior also homered, walked and scored twice as Odyssey improved to 4-3. Jeff Wilson finished 2-for-4 with a double, home run, three RBI and a run scored for the Leopards. Jesse Cardinal was 2-for-4 with an RBI and run scored.

Eastridge 20 East 0
Eastridge’s Nick Goodrich-Leach hurled a no-hitter. The Eastridge starter struck out 10, walked two and faced three over the minimum. The Lancers took advantage of three first-inning errors to push across three runs. John Montana delivered a two-run single in the frame. Ryan Derleth plated two with a triple in a four-run third. Mandel Green finished 4-for-6 with three RBI, three runs scored and reached base all six times he came to the plate. Montana was 3-for-5 with three RBI and two runs scored.

Gananda 13 Lyons 6
Jayden Castrechini hurled three innings for the win and went 2-for-3 with four runs scored and two RBI as Gananda improved to 4-0 on the season. Donnie Kemp was 2-for-3 for Lyons.

Midlakes 14  Waterloo 0
Ezra Maslyn struck out five and hurled a 2-hitter for the win. Harrison Day and Connor Young had three hits apiece to pace a 14-hit attack. Day finished 3-for-4 with an RBI. Young drove in two with three hits in five trips. Austin Avazato was 2-for-3 with four RBI, and Jordan Maher went 2-for-3 with a double and three RBI. Jake Webb had two singles for Waterloo. Midlakes Record improved to 3-3 (2-2 Finger Lakes East). Waterloo fell to 3-5.