Rider goes inside, knocks off Canisius 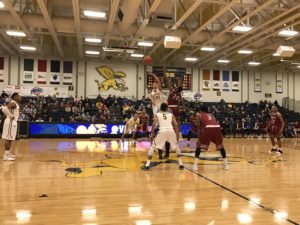 Taylor and Thomas combined for 32 points, and the Broncs shot 21 of 33 inside the arc for the night.

Thomas knocked down a jump hook in the lane to snap a 58-all tie with 3:57 remaining in the game. Rider did not trail again.

Canisius led by as many as seven in the first half and held a six-point advantage in the second-half. Freshman Isaiah Reese combined with Kiefer Douse on an alley oop in the half court. Reese followed with another alley, this time to Selvedin Planincic in transition.  Jermaine Crumpton nailed a 3-pointer from the top of the key, and the Golden Griffins led 47-41 with 12:50 remaining.

“That’s when you got to get a stop,” Canisius coach Reggie Witherspoon said. “You need a couple successive possessions of stops, and it didn’t happen. They were good. They executed, and they scored.”

Taylor highlighted a 9-0 spurt as the Broncs responded to take the lead.

Tyere Marshall used an up-and-under move in the post for two. Taylor followed with a triple from the right wing and two free throws on the following possession. Kealen Washington-Ives capped the run with a bucket in transition. Rider led 50-47.

Rider connected on just 2 of 13 3-point attempts for the night.

Taylor finished with 19 of 5-of-13 shooting from the floor and eight of eight from the free throw line.

Canisius came into the game averaging 9.4 threes per game at a rate of 38.6 percent. The Griffs hit just 6 of 25 from long range.

“They got guys who can really shoot the ball,” Rider coach Kevin Baggett said. “We did a good job defending he three-point line. Any time you can hold those guys down from making those many threes that they normally make then you give yourself a chance to win.”

“The first timeout we talked about, again, going back and reinforcing ‘fellas we got to crowd these guys. You know they can shoot.’ Then we really had a chance to see it having not played these guys yet. Once we did that, once we adjusted trying to get up the floor a little bit more in the passing lane, having these guys catch it out a little further and them guarding them. That was the biggest adjustment.”

“They have good size and because of it they were able to switch a lot of stuff,” Witherspoon explained. “Get out and contest some. Then we missed some that we normally make.

“Rider out-toughed us tonight, that’s essentially what happened. They had 35 rebounds for the game. We had nine rebounds at halftime. Give them credit. They came in here and worked hard for this win.”

Crumpton led all scorers with 20 on 6-of-13 shooting. Douse added 19, and Kassius Robertson had 14. Phil Valenti (Aquinas) collected seven points, six rebounds and an assist.

“They have some big-body guys and they went inside to them tonight,” Witherspoon noted. “But their guards went to the basket as well. They had 19 turnovers, and shot 15 percent from three. Obviously, we didn’t shoot it as well as we normally do. But they just pounded it inside on us.

“We need to raise our level of determination when things get hard. We can’t be a victim. We have to learn how to play with some grit.”

The Griffs converted 19 Rider turnovers into a 25-13 advantage in points off miscues.