Player(s) to watch: Sophomore Jordi Agosto leads the Eagles batting .508 (32-63) with an on-base percentage of .671 to go with 42 runs scored and 25 RBI. Agosto has 11 extra-base hits including seven doubles and three triples. He has stolen 20 bases.

How the Eagles win the title: East has the offensive potential to score runs in bunches as evidenced by their recent 20-run outburst to take the RCAC title.

Stumbling block: A semi-final meeting with Penfield and any number of the Patriots hurler could short-circuit East’s production.

Trends: A recent two-game skid (the Warriors first since 2013) has been put in the rearview mirror. Did they learn anything about themselves during the slide?

How the Warriors win the title: Webster-Schroeder’s lineup lacks any holes. Marshall possesses a dynamic offensive skill set and defensive tools. With Lawlor on the mound they are close to unbeatable.

Stumbling block: Webster Schroeder’s horses can get stuck in the paddock as seen in their recent outing against Fairport when Connor Ewing retired the first 16 Warriors he faced. Oh yeah, Webster-Schroeder could face Fairport in the semi-finals.

Trends: This is not the same McQuaid team which took the title a year ago. Fourteen seniors graduated from that squad. McQuaid carries a four-game winning streak into sectionals including an impressive road win (4-3) over St. Joe’s (VI) to close the season.

How the Knights win the title: Erik Johnson (7-0/0.34 ERA) and Moffat give the Knights a formidable starting duo. Fasten your seat belts. Have 9-1-1 ready on the cell. No open base is safe with the Knights. McQuaid has stolen 87 bags this season while getting caught on just 17 occasions.

Stumbling block: Will McQuaid’s inexperience be a factor?

Trends: Seems like a distant memory when Penfield opened the season winning their first nine games. The Patriots have gone 5-6 since then.

How the Patriots win the title: Penfield’s hitters know how make adjustments at the plate. They can string together hits especially with two outs.

Stumbling block: Late-inning leads are not always a sure thing for Penfield. 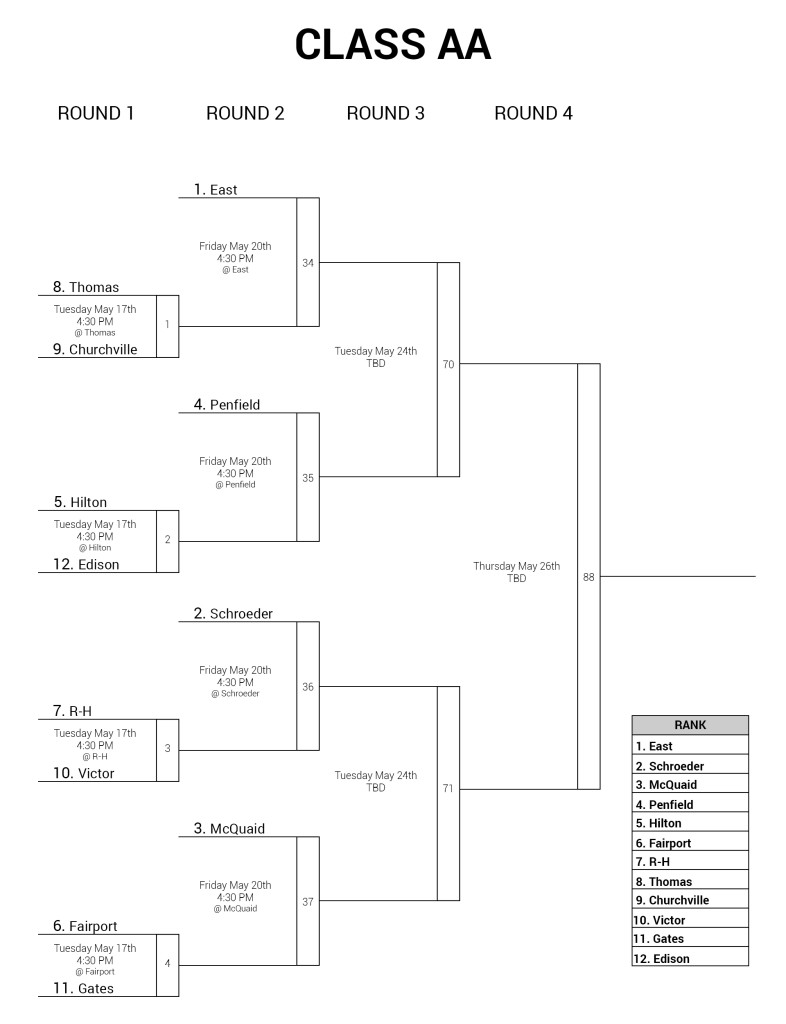 Trends: Hilton has plenty of experience in close games. After dropping four one-run contests earlier in the season, the Cadets have won a pair since then by the smallest of margins.

Stumbling block: Do the Cadets have the pitching to give their bats a chance to win games?

Trends: Fairport won six of its last eight, but the two losses occurred as the result of late-inning problems. Stopper Chad Riorden (0.80 ERA) was out of the lineup recovering from an injury during that time.

How the Red Raiders win the title: Fairport is aggressive at the plate and on the base paths looking to generate offense through hit-and-run situations. Combine that with Ewing on the mound, and the Red Raiders automatically become a contender.

Trends: A pair of recent seventh-inning rallies to defeat Fairport and Webster-Thomas show what the Royal Comets are capable of doing. Will that carry over to the post-season?

How the Royal Comets win the title: Barber is a gutsy starter. The junior right-hander isn’t easily rattled and is capable of getting R-H to the seventh inning against any opponent.

Stumbling block: Are the Royal Comets deep enough to compete with the top teams?

Trends: Injuries have slowed a potent Webster-Thomas lineup. If healthy, batten the hatches.

How the Titans win the title: Smith and Marketell.

Trends: Looking for a team with talent and a healthy sense of nothing to lose? Look no further than the C-C Saints.

How the Saints win the title: Martin, Neu and Sanborn are capable of igniting a rally. Mix in Colin Coykendall and the Saints can put numbers on the scoreboard…quickly.

Stumbling block: C-C is capable of defensive implosions. An error to the Saints is like that first ant in the house during spring: there’s never just one.

How the Blue Devils win the title: No surprise here, small ball is Victor’s way. The Blue Devils know how to move the runner with a bunt even against the tightest of defenses.