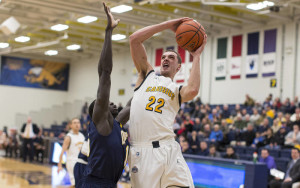 ALBANY, NY – The second game of the 2016 MAAC Men’s Basketball Championship saw the Canisius College Golden Griffs defeat  the Niagara University Purple Eagles, 102-97 in a triple overtime championship edition of “The Battle of the Bridge.”

It required triple overtime to decide the next chapter in this rivalry. The Golden Griffs will now face two seeded Iona College tomorrow, Friday, March 4 at 9:30 p.m. on ESPN3.

The game featured 13 lead changes and 12 ties before Canisius locked up the win. With 199 combined points, this is the highest combined point total in MAAC Championship history. The previous high was 198 between Niagara University and Iona on March 6, 2004 in a single overtime contest.

For the Griffs, Phil Valenti scored a game-high 33 points and added nine rebounds. Malcolm McMillan added 20 and Kassius Robertson added 15. For the Purple Eagles, Emile Blackman scored 26 points and  Karonn Davis scored 20 with 12 from long distance. The 102 points scored by Canisius is the third most for a single team in MAAC Championship history. The record is 106 held by Niagara set in that previous highest scoring game on 3/6/2004, in MAAC Championship history.

ALSO IN THE MAAC

ALBANY, NY – The Manhattan College Jaspers knocked off Marist College 81-63 in the final MAAC Men’s Basketball Championship opening round contest of the day.

The Jaspers were led by All-MAAC First Team member Shane Richards who scored a game-high 27 points on 11-for-15 shooting and was a perfect 5-for-5 from three-point range. Rich Williams and Calvin Crawford chipped in 16 points each. Manhattan will now face third seeded Siena on Saturday, March 5 at 7:00 p.m. on ESPN3.

Rider University was led by Jimmie Taylor who scored 18 points in the win. He was 6-for-9 from the field and five-of-six from the free-throw line. Kahlil Thomas had a strong second half for the Broncs. Eight of his 14 points came in the second stanza. He added 12 rebounds to record a double-double.

Quinnipiac fought until the end of this contest and pulled within one when James Ford hit a three-pointer with 18 seconds on the clock to make it a 58-57 game. Following back to back turnovers, Rider secured the ball and the win when Teddy Okereafor hit two free-throws to extend the lead and secure the win for the Broncs. He finished with five points, six rebounds and six assists.

Abdulai Bundu posted 13 points for the Bobcats in the loss. Chaise Daniels and James Ford were the other Bobcats in double-digits. Ford finished with 12 points and Daniels scored 10 points to go along with six rebounds. Giovanni McLean led Quinnipiac with five assists.

The 2016 MAAC Men’s Championship title game will take place on Monday, March 7 at 7:00 p.m. and will air live on ESPN with the winner earning the leagues automatic bid to the NCAA Championship.