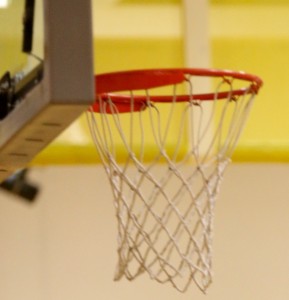 Carter’s three, his fourth of the night, closed a wild finish which saw the Gaelic Knights erase a double-digit deficit to take the lead with 2:07 remaining in the game.

The senior connected from the left wing over a 2-3 zone.

“We were getting into one of our sets to attack the basket,” Bishop Kearney head coach Kevin Goode explained. “That’s pretty much our motion offense against zone, dribble penetrate and kick. He had a wide-open shot. It was his to take, and he took it.”

The basket overshadowed an otherwise spectacular performance from Ludden’s Mika Adams-Woods. The sophomore guard led all scorers with 27 including six in the fourth quarter. His drive across the lane and lay in gave the Gaelic Knights a 64-63 lead – their first since an 18-16 edge mid-way through the second quarter.

“We tried to keep Mika pretty much from going off,” Goode said. “We wanted to get other people involved. We knew that he was going to get his points. We just had to try to contain others by playing better help defense, getting to the shooters and not allowing wide-open looks.”

Adams-Woods scored four as Ludden jumped to an early seven-point lead. Less than one week after falling at home by 18 to Kearney, the Gaelic Knights looked ready to exact revenge. Sh’ikem Lee found Adams-Woods cutting along the baseline for a deuce and an 11-4 Ludden lead. The Gaelic Knights kept the lead at seven when Ed Walser finished in the lane for a 14-7 advantage.

But Kearney’s full-court press changed the momentum in the the second quarter. Carter and Quinton Rose combined for 15 points, and the Kings outscored Ludden, 26-14 to take a 36-28 lead into the half.

“We’re not getting to the right spots,” Bishop Ludden head coach Pat Donnelly said of his team’s struggles. “Guys aren’t coming to the basketball. We get out to a good start in the first quarter and then the pressure bothered us. We just have to look up the floor instead of sideways.”

Kearney used an 8-2 run in the third to take its largest lead of the game.

Rose led Carter into the open floor for a layup. After Joe Connor answered for Ludden with a drive and bucket, Rose sent home a two-handed dunk. Brian Fobbs gathered a loose ball after a Rose block and went the length of the floor for another layup. Carter stepped into a passing lane for a steal and fed Shykell Brown for two and a 52-36 Kearney lead.

“They’re good,” Donnelly commented. “They can score in bunches. They’re a good team. When they shoot it, they’re tough to beat.”

Ludden whittled away at the deficit from there.

Connor finished with a finger roll to cut the lead to single digits 60-51.

Then Jim Grabowski, playing with four fouls, scored seven straight. The senior forward drove baseline and finished with a reverse layup. He followed with a catch-and-shoot three before scoring again to make it 63-58.

“He had four fouls and we put him back in,” Donnelly said. “He competed tonight. He banged around the boards.”

Kearney took a timeout, but Ludden continued to roll. Adams-Woods capped a 13-3 run.

“We’re still looking for that second or third scorer next to Mika,” Donnelly stated. “We got some good spots from a couple guys tonight, but were not there yet as a team.

“On the road, I’m happy that we didn’t fold. We came back. We took the lead. Now we got to learn how to win games.”

After not scoring in the first quarter, Rose finished with a team-high 20 for Kearney including four free throws in the game’s final two minutes.

Carter followed with 18 for the Kings who improved to 9-5 on the season. Caleb Norflee added 12.

Connor chipped in with 15 points for Ludden. Jim Grabowski scored 10 of his 12 points in the fourth quarter.

Adams-Woods scored 27 in last week’s meeting between the two teams.

Both teams were without a key player. Ludden’s Chris Allen sat out because of a concussion. Kearney’s Nahziah Carter was a healthy scratch.

Kearney plays at McQuaid next Tuesday.