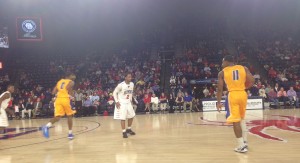 RICHMOND — Every team has a weakness and the Hofstra Pride took advantage of the Spiders’ weakness from the opening tip. Like Superman reacts to kryptonite, the Spiders react to seeing a 2-3 zone. They become hesitant. They become stagnant. They miss shots.

Entering the game, Richmond ranked at the bottom of the Atlantic 10 Conference in 3-point shooting at just 13 percent from beyond the arc, making just nine through their first three contests. Unfortunately for the Spiders, Hofstra head coach Joe Mihalich read the scouting reports and made sure it stayed that way.

But Richmond found a way even after adding to their dismal start from 3-point range by shooting just 8-of-26 from beyond the arc. They regrouped and fought — the true litmus test for a team heading toward success during the season.

“I think tonight when we had to pressure a little bit, it kind of worked in our favor,” Cedrick Lindsay said after the Spiders’ (3-1) overcame an 11-point deficit to defeat the Pride. “We have a bunch of scrappy guys who are kind of used to playing from behind, kind of underdogs and we’ve been fighting like that our whole lives.”

And it showed in a game where Richmond never led until the overtime period.

Joe Mihalich won the 2013 Metro Atlantic Athletic Conference’s coach of the year award while leading Niagara to the conference’s best record last season. But the 15-year veteran of Purple Eagles basketball left for a new challenge at Hofstra and in the game’s opening 20 minutes, one could see the difference Mihalich can make on a game.

Like an offensive and defensive coordinator in the National Football League, Mihalich called both offensive and defensive plays from the sideline, setting up full-court pressures on inbounds and a motion-offense on the other end of the court. His play-calls worked to the benefit of Zeke Upshaw who scored a game and career-high 37 points on 9-of-19 shooting. It’s the second-most points ever surrendered by a Richmond defense, trailing only Craig Sedmak’s 39 points for American on Jan. 30, 1993

Richmond coach Chris Mooney could not help himself while pouring on the accolades during his opening statement.

“I got to give credit to coach Mihalich. I’ve known him a long time and he’s a heck of a coach,” Mooney said. “He inherited a team with very few players and they’ve pieced together a roster and I think they are playing really well over there.”

Yet, Mooney’s Spiders also have shown the mark of a tough team and it starts with Lindsay’s play.

Entering the contest just 57 points shy of 1,000 for his career, Lindsay scored 26 points — 14 of those in the second-half and overtime periods — while shooting 10-of-19 from the field and dishing out four assists with no turnovers. In fact, with Richmond staring down a five point deficit with just 1:55 remaining, it was Lindsay nailing one of his two 3-pointers on the night, closing the gap.

Then, following a Kendall Anthony 3-pointer to give Richmond a three-point lead in the overtime period, it was Lindsay taking advantage of Hofstra turnover by driving through the lane for what would be the dagger points of overtime. Mooney had nothing but praise for the senior who is quickly becoming a luxury the Spiders need on a nightly basis.

“He’s running a team that’s struggling to shoot against a zone which is becoming more and more packed in and he has to turn up the heat on defense,” Mooney said of Lindsay. “He picked his spots, talked guys through cuts, he was really, really good. For a point guard to have 26 points, that’s a luxury that’s nice to have.” 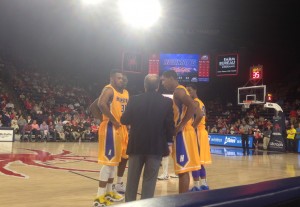 But on this night Lindsay received help from his 5-foot-8 counterpart who has made a name for himself as one of the conference’s most dangerous sharpshooters.

Entering the game shooting just 33 percent from the field, including 25 percent from 3-point range, Anthony stepped up when his team needing him, nailing 5-of-12 3-pointers en route to an 18-point night. Yet his biggest shot and decision of the night came after he air-balled a 3-point attempt before having the rebound fall back toward him. Without hesitating, he unloaded, giving Richmond only their second lead of the night and one they would not relinquish.

“I think it was heart and determination. We wanted to win that game,” Lindsay explained of his team’s rally. “We saw it slipping and coach made a good adjustment with us picking up at full-court … late in the game we were still scrambling and getting steals.”

And it could be said the defensive effort saved Richmond.

After the Pride hit 12-of-21 shots in the first half, the Spiders limited them to just 5-of-24 over the second half and overtime periods, holding their fourth straight opponent to under 41 percent shooting.

With heart, determination and a strong defensive effort, Richmond pulled off grand larceny by stealing the win and also showcasing why the Spiders can never be counted out, no matter the circumstance.

Ryan Lazo is the sports editor at The Hopewell News, covering eight high schools, VCU, VSU, Richard Bland, and University of Richmond. You can view his latest articles here and  can follow him on Twitter @RMLazo13.