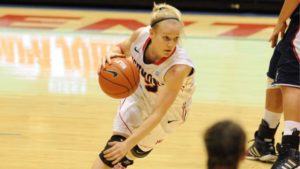 The Roanoke, Va. native finished her decorated four-year career as  the program’s seventh leading scorer (1,488 points) and the nation’s best at the charity stripe (106-113,94%). Oliver was an All Conference first team selection after leading the league in points per game (16.5). Oliver ranked fourth in three point field goals (152), second in games played (129), eighth in free throws (296) and ninth in field goals (519) in program history.

Richmond reached the WNIT for the fourth-consecutive year and won 20 games or more for the third time in the last four seasons.  The 2011-12 squad became the seventh team in program history to win 22 or more games in a season.

Oliver won a remarkable 85 games in her storied career. Richmond’s nine losses were the program’s fewest since 2004-05.