As college football’s opening day fast approaches, it’s unquestionably time to put a marker out there and set expectations for the apple of my college sports eye, Notre Dame.    So here we go … first with 5 key questions for the season and then a game-by-game prediction.

1) This defense showed signs of brilliance over the last third of the 2010 season … has it really transformed into a dominant unit … a Top 10 type PHYSICAL defense? 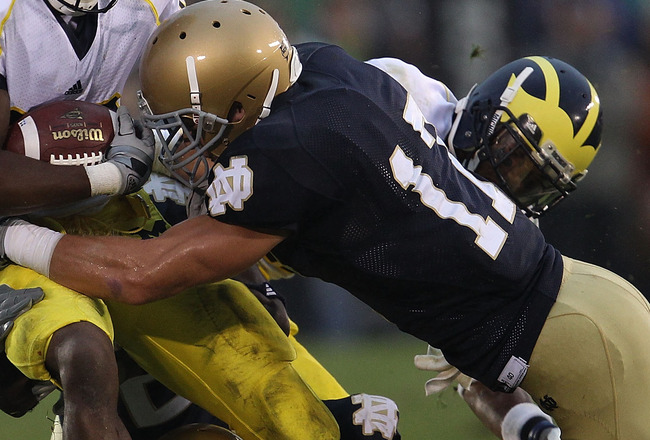 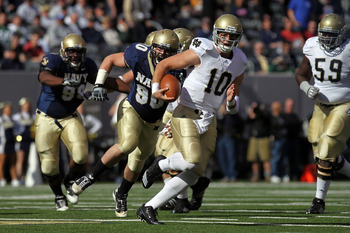 3) Will the Irish run the ball effectively as they did toward the end of 2010? 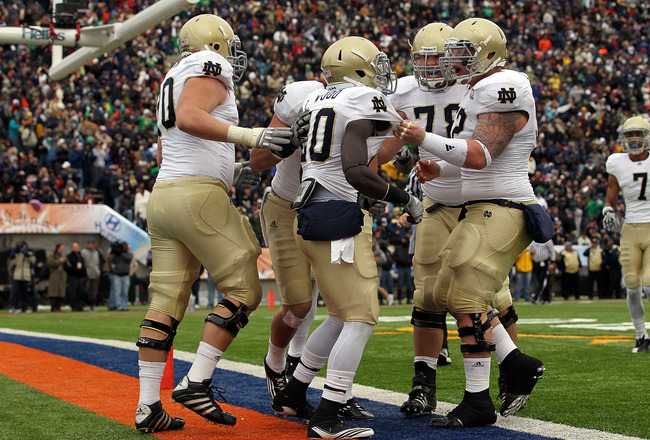 Here’s the schedule with predictions:

S03 SOUTH FLORIDA  (W) — a bit jittery to start, Irish pull away for a 14 point win against the Big East favorite and Lou Holtz’s son, Skip.

S10 @ Michigan (L) — the ball doesn’t bounce ND’s way and neither does some highly questionable officiating in the Big House.  UM by 2.   Pains me to write this.   Have  I previously mentioned my disdain for the Meeeeeeeeshigan Skunkbears???   Grrrrrrrrrr.

O22 SOUTHERN CAL (W) — ND at home and coming off a bye week while USuC is at Cal the week before.   It’ll be close, but the Irish prevail by a field goal in the end.  (Take that, Crash!)

O29 NAVY (W) — Yes, I hesitated.   This will be a nail-biter as ND loses some focus after the big win vs USuC … but the home crowd wills the Irish to a victory in the end.

N12 MARYLAND (at FedEx Field) (W) — I guess this counts as a “home game” for the Irish.   Terps struggling to rebuild … ND typically plays well in these “big stadium showcase games”.

N19 BOSTON COLLEGE (W) — Don’t get caught looking ahead!!!  It’s Senior Day, so let’s go out with a win.   BC is rebuilding … hopefully they won’t be rebuilt by mid-November.   At least this one’s not out there in Chestnut Hill … a graveyard for ND.

So there ya have it … 10-2 and ranked maybe #11 in the country on Dec 1 … probably good enough to barely make a BCS bowl game … and of course folks will be whining that there were “more deserving” teams.    Could it be 9-3?   Absolutely!   Do I feel like I’m out on a limb?    Sure.    ND could lose to Sparty in week 3, at Pitt in week 4 and/or to USC in October.   Bad luck with key injuries early on could quickly turn this into an 8-4 campaign.    On the other hand, the Irish could also win one or both of the games I’ve predicted they’ll lose.

Things appear different now …  the Irish have talented depth at just about every position except running back.    Some freshman could see meaningful playing time this year … and not necessarily because of injuries.   And I’ve detected some maturity on the roster that can weather a storm or two.    Therefore ….

Anything less than 9-3 will be extremely disappointing, at least to this scribe, unless there are extenuating circumstances.     The Irish MUST get off to a good start to be 10-2 in the end … not that it will be easy.    But somehow I think they will buck the trend over the last decade or so.   I have faith in Brian Kelly.   This is an experienced team with essentially 18 starters returning from a team that played very well down the stretch last season while overcoming a boatload of adversity.    I think this team’s got character, leadership and talent … experienced talent.    The depth is getting a lot better thanks to some nice recruiting classes … and the Irish might boast three first round draft picks next April:    WR Michael Floyd, LB Manti T’eo and Safety Harrison Smith.    When’s the last time an ND team could even suggest that?    And when’s the last time I felt comfortable saying that the Irish will be physical and tackle well?   Can’t remember.