Memorial Day will find Cory Brownsten waiting on the NCAA.

After finishing the season 38-18, Brownsten and his University of Pittsburgh Panther teammates fell short of earning an automatic berth to the Regionals of College World Series. The Panthers will have to wait and see if their resume is enough to earn an at-large bid and keep their season alive.

Make no mistake. Whether the Panthers earn an at-large spot or not, Cory Brownsten’s baseball career will continue this summer.

After earning first-team All-Big East honors, the former Webster Yankee and Monroe Community College star is ready to take the next step to the professional ranks.

“That has always been my goal,” said Brownsten. “I want to go to the next level.”

Brownsten proved himself more than worthy the past season. In 48 starts, the senior catcher hit .395 with 17 extra-base hits, including three home runs and 48 RBI.

“I switched my swing,” commented the Lockport, New York native. “Coach helped me shorten my swing while keeping my stance.”

The adjustment paid dividends as Brownsten improved his average 170 points over last season. In the process, Bronwsten has earned the attention of pro scouts. He will work out for the New York Yankees and Philadelphia Phillies in anticipation of next month’s amateur draft.

The right-handed hitter walked 16 times, stole three bases in six attempts and finished with a slugging percentage of .530.  “It’s great to be a part of this team,” added Brownsten.  “We are the number one hitting team in the nation.” 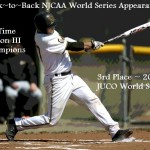 As impressive as his offensive statistic may be, Brownsten’s most defining number lies somewhere between 1.8 and 1.9. That is the catcher’s Pop time – the measurement used by scouts to represent the time elapsed between when the ball hits the catcher’s mitt and when he releases, and it hits the second baseman’s glove. Brownsten’s time is consistent with average Major League catchers. He has maintained this stat since his days at MCC.

“MCC was the best decision I ever made,” noted Brownsten. “Monroe and the Webster Yankees prepared me for playing in the Big East. (MCC coach Pete) Coach Dawes made me what I am today behind the plate.”

In his sophomore season with the Tribunes, Brownsten earned Junior College D2 Defensive-Player-of-the-Year honors to go with a Gold Glove. He garnered first-team All-American, All-District and All-Region hitting .390 with seven home runs, 50 RBI and a slugging percentage of .615. MCC finished the 2008 season third in the nation.

“That was a special team,” said Tribune coach, Mike Kelly. “Pat Urckfitz has already gone pro, and I wouldn’t be surprised if there aren’t more guys from that team that move to the next level.”

“I got to learn so much with MCC and Webster,” added Brownsten. “It was a great experience.”

Time will tell if MCC and Webster fans get a chance to see Cory Brownsten play in another uniform.