Hanna Fenton and Gracie Groome both led their respective squads to the sectional final.

The two seniors were named the Players of the Year as announced by Private-Parochial coaches.

Fenton was an integral part of the Aquinas core as she played both sides of the ball en route to garnering Division I Player of the Year. The senior midfielder accrued 10 assists and scored a trio of goals to consummate 16 points, which ranked 13th in the Private-Parochial League.

Fenton tallied two or more assists in four games, including a season-high three on September 16th in a 6-0 victory over Mount Saint Mary’s (VI). The senior midfielder’s other two-assist performances occurred on September 6th in a 6-2 victory over Sacred Heart (I) and against Greece Olympia twice (October 7th in a 2-0 victory and in a 4-1 win in the sectional quarterfinals). In the sectional quarterfinals victory, Fenton netted the first goal of the match in the 17th minute.

As a defender, Fenton spearheaded a Li’l Irish backline which held its opponents to 17 goals in 19 games and pitched five shutouts, including back-to-back efforts on September 28th and October 1st. In those shutouts, the Li’l Irish outscored the opposition, 18-0. The senior defender and the rest of the backline only conceded two goals three times and one goal on 11 occasions as well.

Teammates Mya Kotsch, Bridget Palmer, Emily Silverstein and Kate Sproul joined Fenton on the Division I First Team. Silverstein led the L’il Irish with 16 goals (tied for fifth in the Private-Parochial League) and 36 points (eighth in the league). Sproul accumulated 94 saves in 1,302 minutes in goal. Kotsch and Palmer both shored up the defense. Kotsch added three assists and a goal. 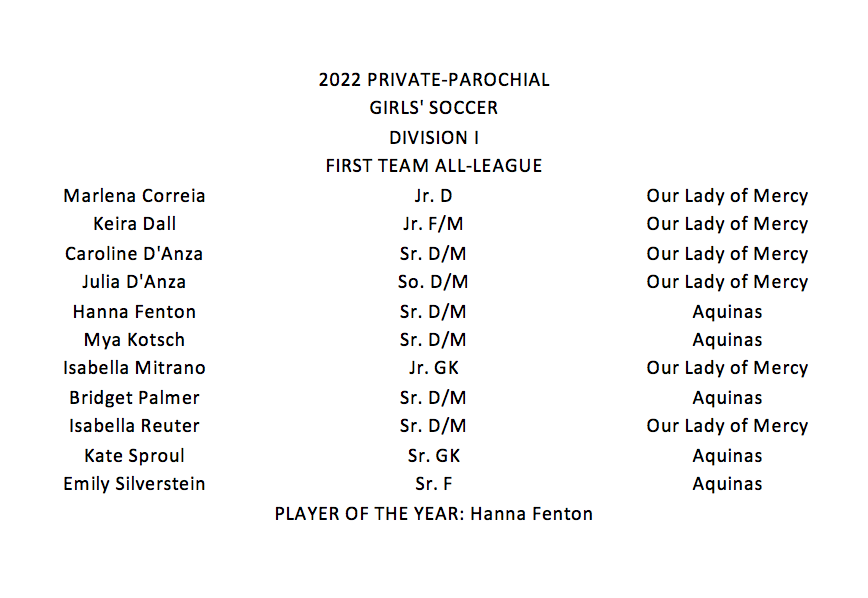 Marlena Correia, Caroline D’Anza, Julia D’Anza, Keira Dall, Bella Mitrano and Isabella Reuter rounded out the Division I First Team for Our Lady Of Mercy. Caroline D’Anza paced the Monarchs’ offense with eight goals plus two assists. Mitrano amassed 96 saves in 1,284 minutes in goal and pitched five shutouts. Dall passed out a team-high nine assists while applying five tallies. Julia D’Anza rounded out the midfield with four helpers and a pair of goals. Correia and Reuter shored up the Monarchs’ defensive backline.

Groome recorded 10 multi-goal games, including a four-goal output in a 6-0 victory over Mount Morris in the sectional quarterfinals. The senior forward spun four hat tricks as well, which occurred on September 2nd in a 4-1 win at Newark, September 8th in a 7-1 win at Lima Christian, October 1st in a 4-0 win at East Rochester and October 3rd in a 5-0 win at Harley-Allendale-Columbia. Groome’s two-goal games came on September 9th in a 4-1 win over Bishop Kearney/Chesterton, September 13th in a 10-0 win over Rochester Academy, September 27th in a 6-1 win over Lima Christian, October 5th in a 7-0 win over School Of The Arts and in a 4-1 victory over Jasper-Troupsburg in the sectional semifinals.

Groome’s final sectionals run of her career concluded with six goals in three games. The senior forward led the Falcons to a 13-5-1 record, the No. 2 seed in class D2 and the sectional final.

Teammates Paris Blackmon, Allie Frederickson and Kiara Vanderjagt joined Groome on the Division II First Team. Frederickson nearly matched her goal-to-assist output with 16 goals (tied for fifth in the Private-Parochial League) and 15 assists (tied for first) for 47 points (third). Blackmon recorded 42 saves in 360 minutes in goal as the backup netminder. Vanderjagt chipped in three goals and an assist as part of the midfield.

Katelyn Demarest, Grace Kearney and Ava Thomas-Guzman made the Division II First Team for Northstar Christian. The midfielder trio combined for 53 goals, 30 assists and 136 points for the class D2 sectional champions. Kearney led the way with 21 goals and 14 assists for 56 points. Guzman finished right behind Kearney with 18 tallies plus seven helpers. Demarest rounded out the trio with 14 goals and nine assists. 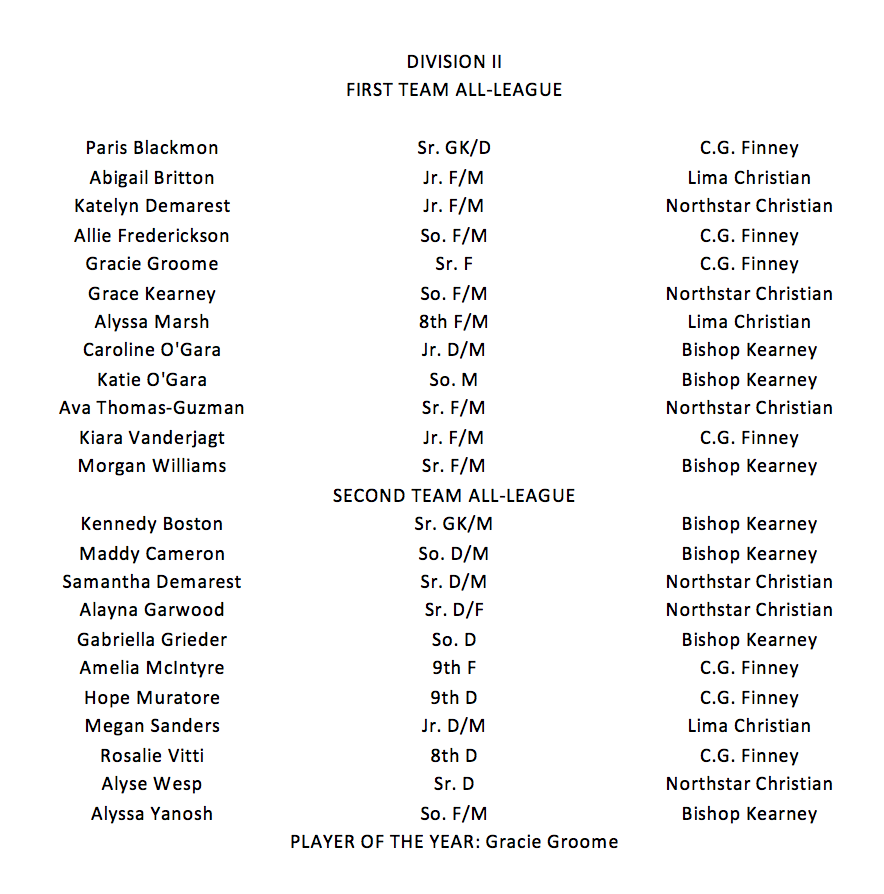 Caroline O’Gara, Katie O’Gara and Morgan Williams represented Bishop Kearney/Chesterton on the Division II First Team. Williams conducted the Kings with 13 goals and three assists. Katie O’Gara recorded a team-high seven assists while supplying a trio of scores. Caroline O’Gara played both sides of the field and provided five assists and a goal.

Abby Britton and Alyssa Marsh rounded out the Division II First Team for Lima Christian. Marsh accounted for 46 percent of the Saints’ offense by scoring 18 (tied for third in the Private-Parochial League) of the team’s 39 goals and adding two assists. Britton summed three helpers and a pair of tallies.