“We’re excited, looking forward to it,” said Jeff Parizek who is in his 10th season as head coach of the Rochester Girls team. “We’re super-athletic. We have so many interchangeable parts.”

With a pair of Division I commits in Caydence Hadley (Bishop Kearney/Towson State) and Ella Meabon (Fairport/Colgate) along with Livonia’s Kylie Buckley who has had Division I interest and LeMoyne commit Sydney Postell (Churchville-Chili), Parizek sees his team’s size as an advantage.

“We have seven kids six-foot or bigger,” he noted.

Parizek will look to use that height advantage in transition.

“We’re preaching that,” he said. “With only four (tournament mandated) practices, there’s only so much you can do offensively. To be able to run is huge. Rebounding is a big part of transition and with our size we shouldn’t struggle with rebounding.”

Parizek’s 2018 squad led by current Syracuse University guard Dyaisha Fair (Edison Tech) claimed the BCANY championship as did the 2013 team that featured current pro Cierra Dillard (Gates-Chili/Buffalo). If the current lineup is to match those former teams, Parizek knows his players will have to accept different roles than what they play with their high school teams. 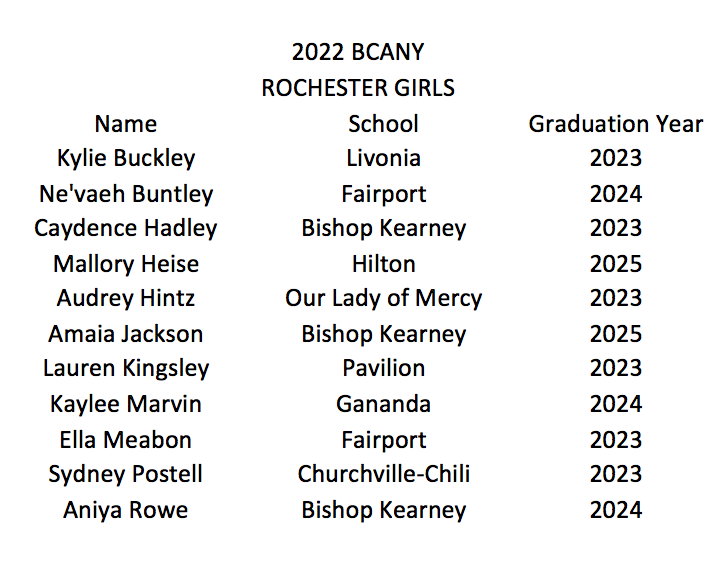 “We went around at practice and asked each kid how many points they score per game. Every kid averages at least 12 points during the high school season. If you do the math, that’s over 120 points per game. I love to say we can do that, but more importantly we need to understand there’s a lot of talent with one ball. We got to find a way to play together and move it and take good shots.

“Playing in transition is easy. Push the ball and if you can get a layup take it. If you can’t, look for that first open shot. Move the ball a little bit and we’ll be fine.”

The Rochester Girls open play against the Mid-Hudson squad with a 4:00 p.m. tip off at Johnson Elementary School. Rochester faces the Central squad later in the day before squaring off against Suffolk and Hudson Valley on Saturday.

“It’s one of my deepest teams,” said Parizek who has coached Rochester since the festival’s inception in 2011. “Four years ago with Dyaisha, we knew what we had. We knew we were good. When we won it with Dillard in 2013, we knew what we had. This team is so deep. There is not a drop off from one through 10 on the roster.”

Stephen Strauss takes over on the sideline for the Rochester Boys.

“I’m beyond excited about it,” said the former Nazareth College assistant. “As a college coach, I was going to recruit at this event every year and evaluate players. I know how great of a tournament it is from that perspective.”

“We feel pretty fortunate with the lineup that we were able to get,” Strauss said. “We’ve got enough depth at point guard. We’ve got enough depth at the ‘5,’ and we got a whole lot of talent along the wing. We’re going to run as much as we can. We’re going to try and drive and attack the rim as much as we can. And then we’ve just got some talent to bang bodies and play physical.” 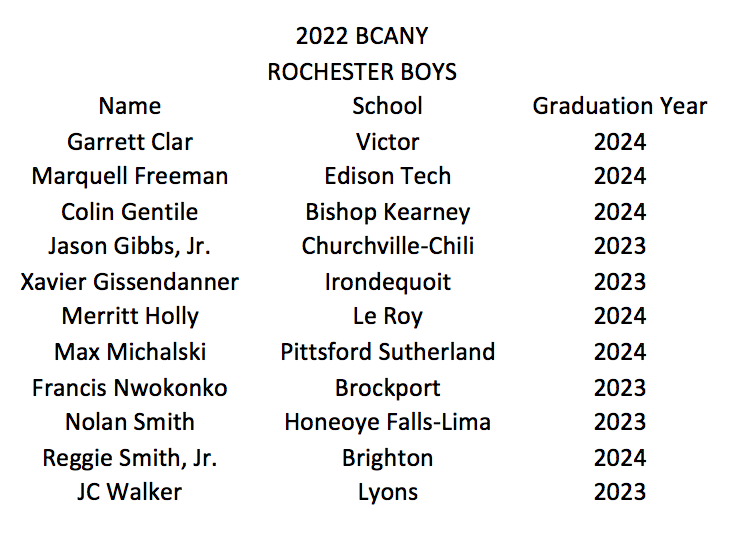 Rochester opens against Buffalo on Friday. A 2:30 p.m. tip-off is scheduled at Johnson City Elementary. The Boys then face the Central squad later in the day before games against Suffolk and Hudson Valley on Saturday.

“You only get four practices, but you get good players and they want to listen. We get as organized as we can. It’s really good basketball.

“I think our roster is as balanced and as deep as anyone we’re going to come across. It’s going to be fun to see how our guys compete.”