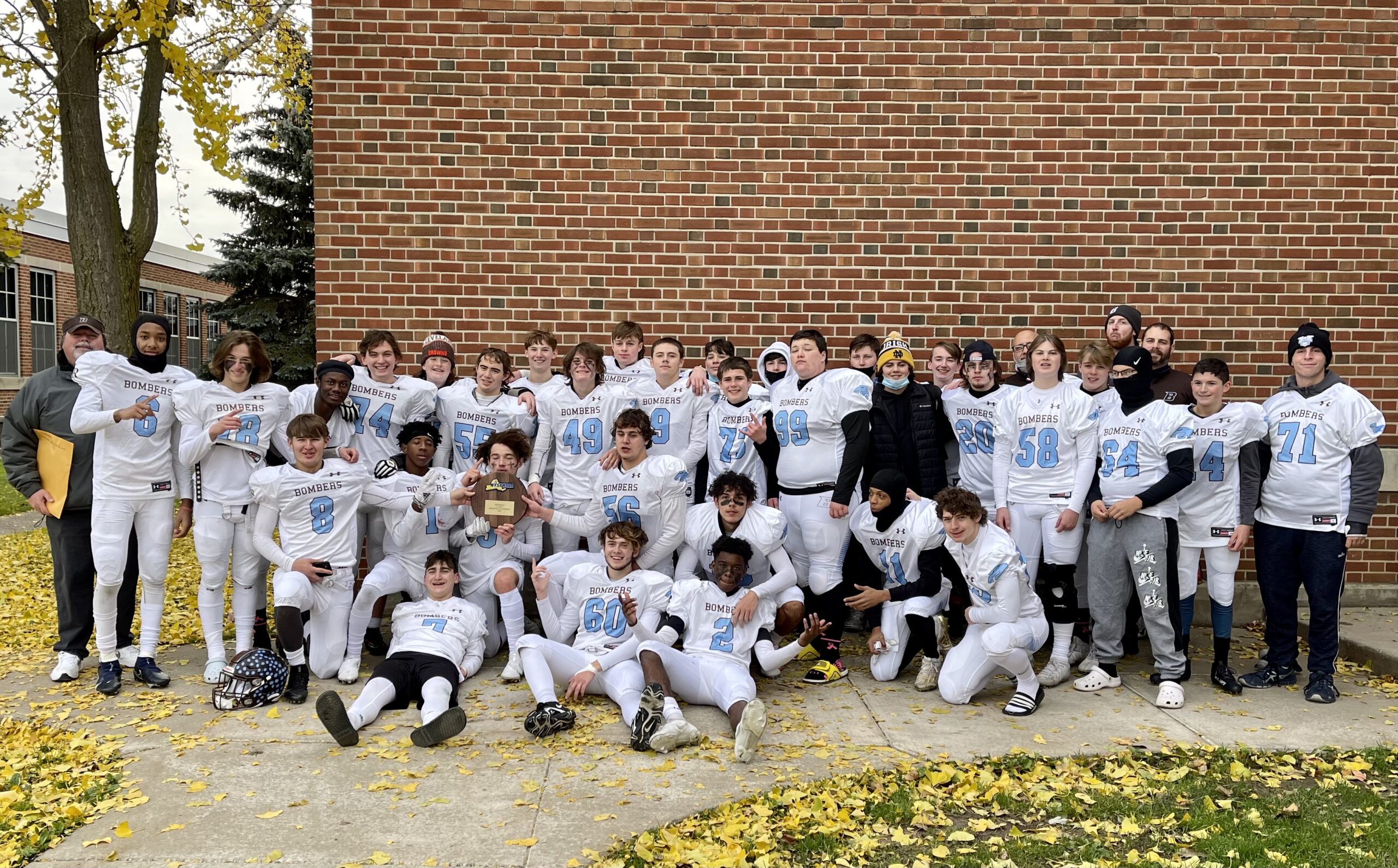 WILLIAMSVILLE, N.Y. — After watching an 18-play drive get short-circuited by an interception in the end zone, ER/Gananda head football coach Brian Touranjoe told his team at halftime that he thought the state rankings were flipped.

Manny Sepulveda returned a kickoff for a touchdown, and Carter Lathrop scored on a quarterback keeper as ER/Gananda rallied to beat top-ranked Medina, 26-24 in the New York State Class C Far West Regional on Saturday.

Sepulveda’s 70-yard return tied the game at 18 with :08 seconds remaining in the third quarter. The Bomber defense held on a three-and-out, and less than two minutes into the fourth quarter ER/Gananda had a lead it did not surrender.

“The key was we said to try and wear them down,” Touranjoe stated. “We had ball possession for a majority of the first half, and I could see they were getting tired at the end of the third quarter.

“Even though we didn’t score there (at the end of the second quarter), the momentum swung, but we had them tired.”

Sepulveda’s touchdown came on the ensuing play after Medina had taken an 18-12 lead.

“I was patient with it,” Sepulveda said of the run. “I saw the hole. I ran through the hole. It was open like I thought it would be.

“They were coming fast. The hardest part is slowing your mind down. Sometimes players get overwhelmed thinking they will fumble it. I caught the ball cleanly, took a breath and went to the hole.”

Jeremy Blanchard set up the eventual game-winning touchdown with a 32-yard punt return.

The junior tight end/defensive end alertly grabbed a short punt in the middle of the field and found a seam to his left.

“When I came off the ball and went to block my man, I saw the ball go directly in the air,” Blanchard said. “I saw it bounce and no one was there. I saw open field, picked the ball up and took off. Did what I could.”

With the ball at the five-yard line, the Bombers needed two plays, and Lathrop finished it off.

“Our offense controlled the ball and then when our defense needed to rise up they’ve done it all year,” Touranjoe said. “These kids have a belief in what they’re doing. Our motto has been ‘One team, one family.’

“It’s not about the stats. Our category at the end of the game is more points. That’s their main goal. That’s what’s been great about this team.”

ER/Gananda forced a fumble on the first play from scrimmage of the game. Nine plays and one penalty later, the Bombers started the game’s scoring.

After a pass interference call on a fourth-down incompletion set up ER/Gananda inside the Medina 10-yard line, the Bombers needed two more plays with Adrian Letta scoring his first of two touchdowns on the day.

Medina scored on its first possession of the second quarter to make it a 6-6 game.

Touranjoe’s squad looked ready to take a lead into halftime but a turnover ended a nearly nine-minute possession.

Nine running plays followed an incomplete pass to start the drive. The next time Lathrop went to the air, the senior signal caller found Miles Caviness under the coverage for a first down at the Medina 36.

Four plays later, Lathrop and Caviness connected again, this time to set up a third and four from the 19. An offsides call gave ER/Gananda a first down at the 13. Lathrop’s keeper on second down moved the ball to the five. His fourth-down pass intended for Caviness was picked off by Medina’s Greg Thompson.

On 4th &2 from the 5 with 0:42 on the clock (18th play of the drive) Greg Thompson gets the interception. HALFTIME NYS Class C Far West Regional: ⁦@ERGFootball⁩ 6 ⁦@MedinaSports⁩ 6 pic.twitter.com/pBfjNzaeoA

“That was my bad on the call,” Touranjoe said of the turnover. “I told the OC to run that play.”

“We could have been mad at Carter,” Sepulveda said. “We could have freaked out on him, but we said ‘Carter, take a breath. You’re good.’ We regrouped as a team, and we came out in the second half and we did our thing.”

Chaunsey Gilbert highlighted a five-play, 61-yard drive with a 38-yard rush to set up the Bombers with first down at the Medina two. Letta scored one play later to tie the game at 12 with 2:44 to go in the third quarter.

From earlier: This 38-yard scamper from Chaunsey Gilbert set up a game-tying TD for ⁦@ERGFootball⁩ midway through the third quarter. pic.twitter.com/VGYoQXLWqu

The Bombers absorbed Medina’s big plays throughout the game without allowing the Mustangs to build momentum. Quarterback Xander Payne connected with Jarin Rhim on a 61-yard catch-and-run early in the second quarter. That led to the first of three Noah Skinner touchdowns.

Thompson made a diving catch on a 31-yard completion to set up Medina on the five for an eventual 18-12 lead.

Medina had one last chance to win the game. The Mustangs took possession at their own 14-yard line with 2:55 remaining. The Bombers, highlighted by a Hunter Groh sack, did not allow a sack.

Gilbert finished with 100 yards on 16 carries. Daniels rushed for 25 yards on four carries.

Caviness made four catches for 25 yards.

Hunter Groh led the defense with six tackles and the one sack. Jordan Richards had five tackles.

“August 23rd at our first meeting I told them ‘Last season was tough. We were three (wins) and three (losses),” Touranjoe commented. “I got energy back. We’re going to win this block. Mark it down right now. We’re winning the block.’ I knew Class C was wide open. Now did I say we were going to be 12-and-O? I didn’t guarantee that. I didn’t think about that. It’s been unbelievable. I’m just so proud of them.”

“To win sectionals and then come out here and just keep doing what we’re doing and playing football like we love, it feels great,” Blanchard said.